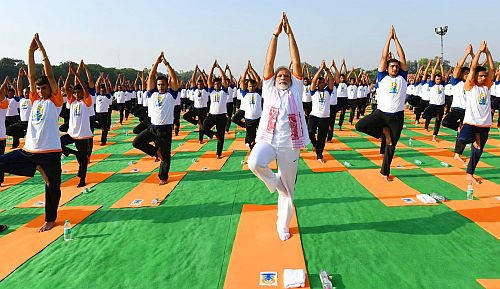 The PM has said that yoga has become the biggest mass movement across the globe in the quest for good health and wellbeing, which is crucial to the creation of a peaceful world.


The PM was performing Yoga with over 50,000 enthusiasts at the Forest Research Institute campus in Dehradun. He said the ancient Indian discipline has emerged as the most powerful unifying force in a strife-torn world.

"Dehradun to Dublin, Shanghai to Chicago, Jakarta to Johannesburg, Himalayan highlands or sunburnt deserts, Yoga is enriching millions of lives all over the world.


"Yoga fosters amity in societies which can form the basis of national unity," the prime minister said. He said the proposal for the Yoga Day at the UN was accepted in record time with a majority of nations supporting it. Today people all over the world have come to look upon yoga as something which belongs to them," Modi said.
« Back to LIVE