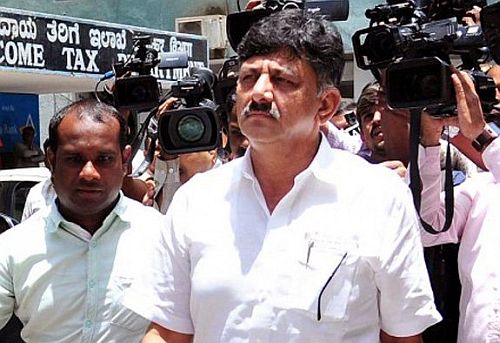 The Income Tax Department filed a complaint before the Special Court for Economic Offences, Bengaluru, in which the Karnataka Minister DK Shivakumar has been accused of operating a hawala network.


With the BJP demanding Shivakumar's resignation over the I-T department's notice, Karnataka Chief Minister HD Kumaraswamy has said that the state's water resource minister has the right to legal recourse.


Yesterday, a senior Income Tax official confirmed that the fourth summons had been issued against Shivakumar by the special court dealing with economic offenses.


"Court has issued the summons. One more complaint has been filed. Last time there were three. The case is same. The only thing is different years are involved. The case pertains to tax evasion," said the official speaking on condition of anonymity.


Sources in the Income Tax department said along with Shivakumar, a case has been registered against his associates. Raids were carried out recently against his close friends and relatives of Shivakumar, which drew angry reaction from the minister and his parliamentarian brother DK Suresh.


They had alleged that the income tax department was trying to fix Suresh in the case. When raids were carried out at the residences of Sunil Kumar and Anjaneya, some cash and documents were allegedly seized. In this connection, the I-T department had issued notices to them seeking explanation.
« Back to LIVE