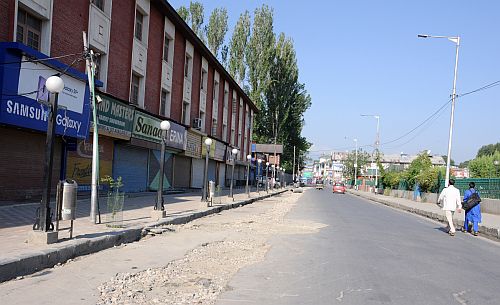 Normal life was affected in the Kashmir Valley today due to a strike called by separatists against the killing of journalist Shujaat Bukhari. Most shops, fuel stations and other business establishments in Srinagar were shut, a police official said. He said public transport was minimal in the city, but private cars, cabs and auto-rickshaws were seen plying.


The official said similar reports were received from other district headquarters of the valley. The separatists, under the banner of Joint Resistance Leadership, on Tuesday called for a strike for today against the killing of Bukhari and also civilians allegedly in security forces firing.


The spokesman said the JRL demands an international probe into Bukhari's gruesome murder. Bukhari was shot dead, along with his two personal guards, outside his office in Press Enclave here on 14 June by unknown gunmen. Authorities have suspended train services in Kashmir as a precautionary measure, the police official said. -- PTI


Image: A deserted street in Srinagar. All shops were closed with only a few private vehicles out on the streets. Pic: Umar Ganie
« Back to LIVE
Business emailOffice email AppDomain registrationWebsiteRediffmailMoneyCompany emailOnline ShoppingBooksGiftsVideosBlogsBuzz