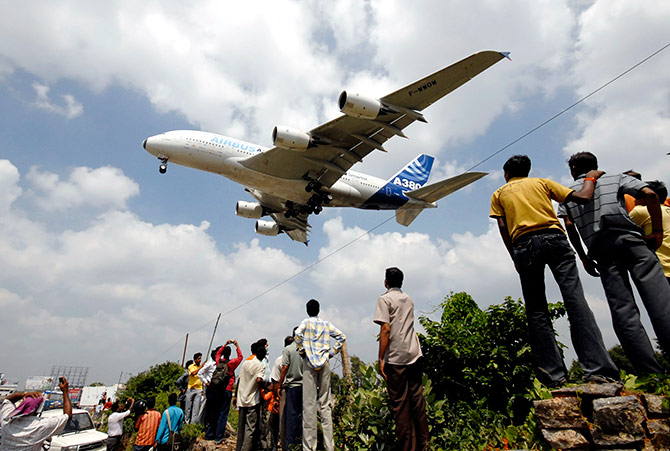 The restriction on use of airspace in the run-up to Republic Day has been reduced to seven days from nine, bringing some relief for passengers planning to travel from or into Delhi.

Nearly 1,000 flights were expected to be cancelled or rescheduled by the airspace closure imposed for commercial airlines for 100 minutes everyday for nine days from January 18 to 26.

But now there will be no restrictions on January 19 and January 25 which will bring the number of flights affected to approximately 780, according to an airport official.

The number of days for which the restriction was placed was brought down to seven after hectic consultations among the Ministry of Civil Aviation and Ministry of Home Affairs and the Indian Air Force, a source said.

"Of the total nine days, three were standby days and the Indian Air Force has decided to withdraw two of them. January 19 and January 25 have been excluded (from the period of restriction)," according to the official.

The Airport Authority of India had issued a Notice to Airmen on December 29 informing airlines that no take-offs or landings would be allowed at Indira Gandhi International airport between 10.15am and 12.35 pm for nine days between January 18 to 26.

Indira Gandhi International Airport witnesses 67 air traffic movements (both take offs and landings) per hour between 8 am to 11 pm everyday.

With airspace shut for 100 minutes for seven days, an estimated 780 flights will either be cancelled or rescheduled now.

This means on an average 100 flights per day would be impacted. The source said that efforts are on to ensure that no more than approximately 60 domestic flights are cancelled per day.

International flights, which account for the remainder of flights, will only be rescheduled and not cancelled.  -- PTI
« Back to LIVE