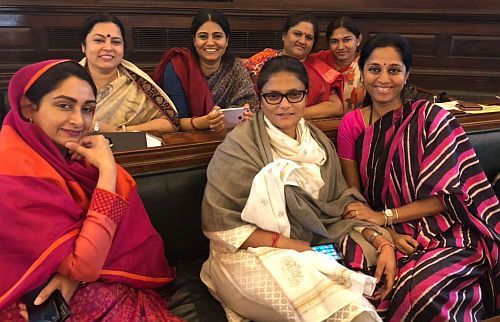 The Lok Sabha adjourned today for nearly a month-long recess amid unrelenting protests by Andhra Pradesh members demanding more central assistance for the state. Members from the ruling NDA ally TDP and YSR Congress went on with their protests during Zero Hour. The proceedings were first adjourned soon after meeting for the day for Question Hour. After papers listed for the day were laid, Speaker Sumitra Mahajan adjourned the House, which would now meet again on March 5. It also marks the end of the first half of the Budget session in the Lok Sabha.


But outside Parliament, putting away political differences, NCP MP Supriya Sule and a few other women MPs took time out to pose for this warm picture. Politics and politicking is strictly for the House, outside it, bonhomie rules. Supriya Sule tweeted, "Adis till March."


This is not the first time MPs faced the cameras as friends and not bitter rivals. Some images from the winter session of Parliament which ended last month.