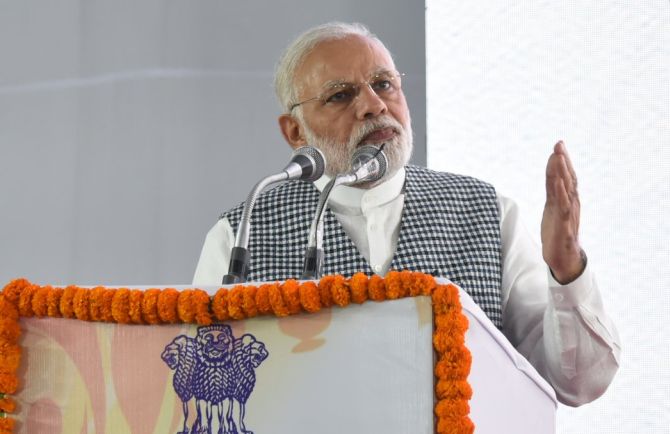 Prime Minister Narendra Modi today said the promulgation of an ordinance on rape demonstrated his government's determination to act on the issue, but stressed that people had to respect their daughters and make their sons more responsible for an atmosphere of safety.

Modi also pitched for a social movement to ensure the safety of women and girls while addressing a rally in Mandla, Madhya Pradesh.

"Shivraj ji (Madhya Pradesh Chief Minister Shivraj Singh Chouhan) just referred to the capital punishment provided in the ordinance for rape against minors and I could see that it (the remark) received cheers from everyone present here," he said.

"There is a government in Delhi which listens to your voice and takes decisions. So, the Centre has made a provision for capital punishment to the monstrous intent," he said while referring to the recent ordinance.

The Union cabinet on April 21 approved the ordinance under which the death penalty could be awarded to those convicted of raping girls below 12 years of age, amid a nation-wide outrage over cases of sexual assault and murder of minors in Kathua and Surat and the rape of a teenager in Unnao.

Modi, however, called upon the people to create an atmosphere for the safety of daughters.

"Families will have to enhance the honour and respect of daughters. Families should also make their sons more responsible," he said, while addressing the National Panchayati Raj Sammelan at Ramnagar in the tribal-dominated Mandla district.

"In this way, the safety of daughters would not be a difficult task. We have to launch a social movement in this direction," he said.

He also talked about the welfare of tribals and farmers and asked the elected representatives of Panchayats to educate villagers to become self-dependent in farming.

The prime minister also urged the panchayat representatives to spend NREGA funds during the months of April, May and June only on works related to water conservation.  -- PTI
« Back to LIVE
Business emailOffice email AppDomain registrationWebsiteRediffmailMoneyCompany emailOnline ShoppingBooksGiftsVideosBlogsBuzz