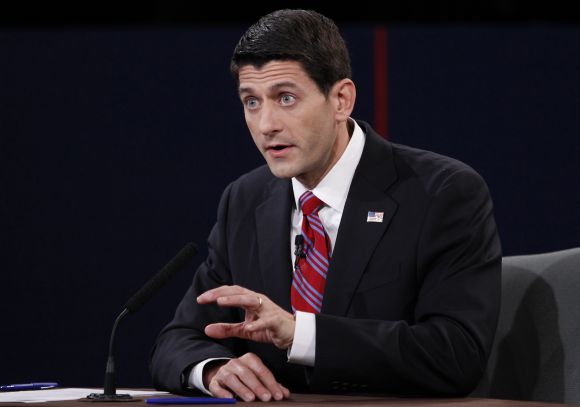 The top Republican in the United States House of Representatives, Paul Ryan, has decided to retire when his term ends, paving the way for a new Republican leadership in the Congress next year.
Citing family reasons for his decision, Ryan clarified that he is not resigning and that he would serve the rest of the term till early January next year.
"I am announcing that this year will be my last one as a member of the House," Ryan told reporters at a news conference.
"I will be retiring in January, leaving this majority in good hands with what I believe is a very bright future," said the Speaker who in 2015 had invited Prime Minister Narendra Modi for his highly successful joint address to the US Congress.
President Donald Trump paid tribute to Ryan as "a truly good man."
"Speaker Paul Ryan is a truly good man, and while he will not be seeking re-election, he will leave a legacy of achievement that nobody can question. We are with you Paul!"  Trump said in a tweet.
Vice President Mike Pence said Ryan will continue to be a great representative for the people of Wisconsin through the rest of his term and will continue to work every day with him to keep our promises to the American people.
Ryan cited family reasons for his decision.
"It's almost hard to believe, but I have been a member of Congress for almost two decades. This is my 20th year in Congress. My kids weren't even born when I was first elected. Our oldest was 13 years old when I became speaker, " Ryan said.
"Now all three of our kids are teenagers. And one thing I've learned about teenagers is their idea of an ideal weekend is not necessarily to spend all of the time with their parents," he said.
"What I realize is, if I'm here for one more term, my kids will only have ever known me as a weekend dad. I just can't let that happen. So I will be setting new priorities in my life, but I'll also be leaving incredibly proud of what we have accomplished," Ryan said.
« Back to LIVE