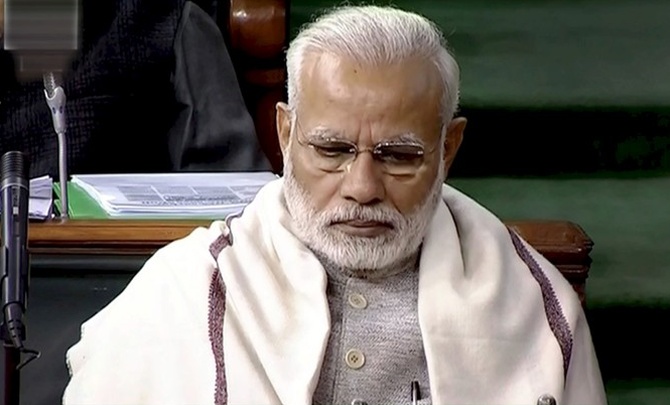 Prime Minister Narendra Modi today said the Centre has suggested to the finance commission to consider incentivising states working on population control, while refuting charges that the Terms of Reference of the 15th Finance Commission were biased against certain states.

The issue was being raised by 'vested interests', he said without naming anyone.

Modi's remarks come within days after Communist Party India-Marxist ruled Kerala hosted a conference of finance ministers of southern states, which was also attended by Puducherry, a Union Territory, on Tuesday.

At the conclave, Kerala, Karnataka, Andhra Pradesh and Puducherry had opined that ToR were in contradiction to the principles of federalism enshrined in the Constitution and would also result in revenue loss to performing states.

Tamil Nadu, which skipped the meeting, yesterday said using the 2011 census to calculate population for allocation of union tax revenue 'would greatly impact' the state which has 'efficiently' implemented population control measures.

It had decided to make a representation to the Finance Commission through MPs from Tamil Nadu on the matter, seeking necessary amendments.

Modi said Tamil Nadu 'would certainly benefit' following the Centre's suggestion to the Finance Commission on incentivising such states.

"The Indian government has suggested to the finance commission to consider incentivising states that worked on population control," the prime minister said.

"By this yardstick, a state like Tamil Nadu which had devoted a lot of effort, resources and energy on population control would certainly benefit," he said.

This was not the case earlier, he added.

Modi was speaking after inaugurating the 'Diamond Jubilee Building' of the city-based Cancer Institute and various other facilities there.

The prime minister referred to what he said was 'a baseless allegation being made about the terms of reference of the 15th Finance Commission being biased against certain states or a particular region'.

"Let us all work together to build a new India which would make our great freedom fighters proud," he said. Modi also extended his Tamil New Year greetings. The New year is being celebrated on April 14.  -- PTI
« Back to LIVE