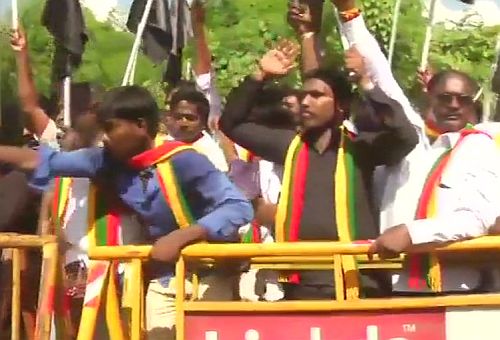 PM Narendra Modi arrives in Chennai amid protests over the Cauvery issue. The PM is in Tamil Nadu to inaugurate the Defence Expo which began in Chennai today. The four-day event showcases India's defence manufacturing capabilities to the world.


The PM will take a chopper ride from the airport to the venue at Mahabalipuram.

Despite security being tightened in and around Chennai, protestors carrying boards saying, 'Go Back, Modi', black balloons and black flags, lined the road outside the airport.

The protests were organised by the opposition parties and fringe groups to demand the constitution of the Cauvery Management Board.

DMK working president MK Stalin spearheaded the protests asking people to hoist black flags atop their houses. The opposition is upset over what the see as the Centre's "inaction" on the Cauvery issue.

Protestors are also likely to gather at various points in the city, including IIT Madras and the Cancer Institute, where the PM will be inaugurating other projects.

The Prime Minister is on a day-long fast to protest against the washout of the budget session of Parliament.

Police personnel have been deployed in large numbers throughout the city, and several bus routes have been diverted to ease the congestion.

This is not the first time that black flags have greeted the PM. During his visit to Kochi in 2015, Youth Congress workers greeted Modi with black flags when he arrived at the naval airbase.
« Back to LIVE