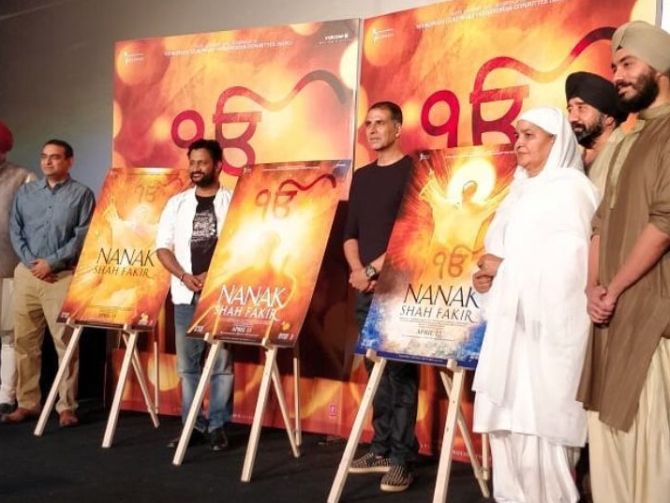 The Delhi high court today refused to stay the release of movie Nanak Shah Fakir, scheduled to hit the theatres from tomorrow, saying the petition was motivated after the Supreme Court refused to grant any relief.

The high court said it was unbelievable that the Delhi Sikh Gurudwara Management Committee (DSGMC), which has filed the petition challenging the no objection certificate issued by the Censor Board, was not aware of the making of film till now.

A bench of Acting Chief Justice Gita Mittal and Justice C Hari Shankar said the 'release of the film cannot be interdicted'.

The court directed the Centre to ensure maintenance of law and order and made it clear that it was not granting any ex parte relief to DSGMC without hearing the film producer.

The petition challenged the release of the movie saying it has characterised the family members of Guru Nank Dev with humans/actors which is against the principles of Sikh religion.

The SGPC made two pleas, one in the morning and then in the afternoon, before the apex court which rejected both of them. The top court had on April 10 criticised the SGPC, the apex religious body of the Sikhs, for imposing restrictions on the film Nanak Shah Fakir and cleared the decks for its nationwide release scheduled on April 13.

It had said that after the CBFC certification, no group, body, association or individual can create any kind of disturbance in exhibition of the film.  -- PTI

IPL 2022: Sunrisers, Punjab aim to finish on a high

Their play-off hopes dashed, both Sunrisers Hyderabad and Punjab Kings will be keen to end IPL 2022 on a winning note when the two teams clash in a dead rubber in Mumbai on Sunday.

The busy Lal Chowk city centre on Saturday reverberated with slogans like 'We want justice' and 'Administration haye haye' (down with administration) as scores of Kashmiri Pandits took out a protest march against the killing of Rahul...

In an editorial in party mouthpiece Saamana, the party said that while on the one hand the Bharatiya Janata Party has already started preparing for the 2024 Lok Sabha elections, the Congress is in dire straits.

Embattled Sri Lankan President Gotabaya Rajapaksa had declared a state of emergency with effect from May 6 midnight, the second time in just over a month amidst growing countrywide anti-government protests over the economic crisis.

The consultations during his visit revolved around the upcoming polls for Rajya Sabha and Legislative Council.