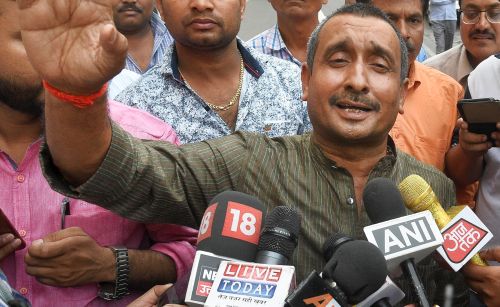 Atul Singh, brother of BJP MLA Kuldeep Sengar, has been arrested in connection with death of Unnao rape victim's father in jail. Three other people have also been arrested.
The father of an 18-year-old woman, who alleged that she was raped by Bharatiya Janata Party MLA Kuldeep Singh Sengar and his brothers, on Monday died in custody in Unnao, prompting her to put the blame on the lawmaker, who rejected the charge as a conspiracy and said the complainant belonged to 'low class'.
The alleged victim's father, aged around 50, was rushed to a hospital from the district jail on Sunday night and died during treatment on Monday.
He was arrested on April 5 under the Arms Act, police officials said. The news of his death spread like wildfire with opposition parties slamming the Bharatiya Janata Party government even as Chief Minister Yogi Adityanath promised action against the guilty.
Image: BJP MLA Kuldeep Sengar rejected the rape charge as a conspiracy and said the complainant belonged to 'low class'. Photograph: Nand Kumar/PTI Photo
« Back to LIVE