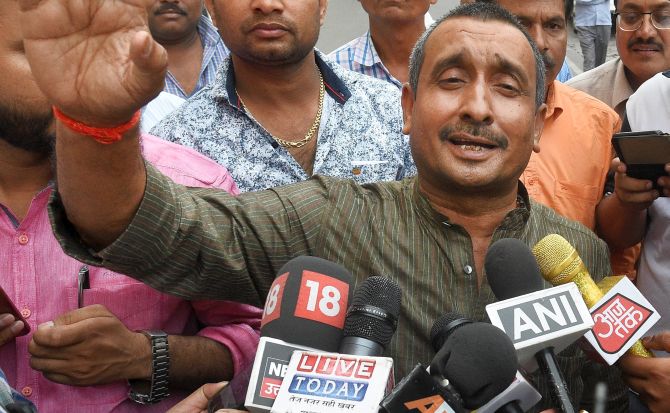 A special investigation team (SIT) has been constituted to probe the rape of an 18-year-old woman, allegedly by BJP MLA Kuldeep Singh Sengar and his brothers, in Unnao and the custodial death of the victim's father.


"The SIT will go into the entire gamut of issues involved in the incident," ADG (Law and Order) Anand Kumar told a press conference.


Anand Kumar, ADG Law and Order said the postmortem report on the girl's father states that the cause of death is shock and septicemia due to peritonitis and ascending colon perforation.


"Investigation is being done and action will definitely be taken:," the ADG said.


Earlier today, Atul Singh, the brother of the rape-accused BJP MLA, was arrested in Unnao. The BJP MLA has rejected the charge as a conspiracy by his opponents. The ADG also said that so far clean chit had not been given to anyone in the matter. The victim's father yesterday died in custody in Unnao, prompting her to charge that he was killed inside jail at the behest of the lawmaker. -- PTI
« Back to LIVE
Business emailOffice email AppDomain registrationWebsiteRediffmailMoneyCompany emailOnline ShoppingBooksGiftsVideosBlogsBuzz