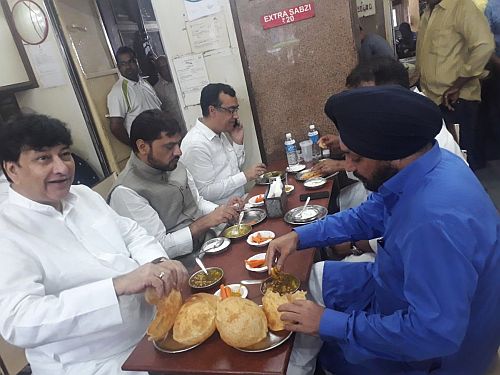 Cong's AS Lovely on the photograph of him and other leaders (Ajay Maken, Haroon Yusuf, enjoying a meal of chhole bature on a day the party has called a fast to protest policies of the government and the derailed budget session of Parliament.


Lovely clarified, "Photograph is of before 8 am, this is symbolic fast from 10.30 am to 4.30pm,it is not indefinite hunger strike.This is what is wrong with these (BJP) people. Instead of properly running the country, they concentrate on what we eat."


The picture was tweeted by BJP's Harish Khurana. Speaking to ANI, Khurana, said, "This picture (of Congress leaders eating before fast) reveals double-standard of Congress. On one hand they are claiming to observe fast, on the other hand they are seen having food at a restaurant. The picture is authentic. Let them deny it."


Congress president Rahul Gandhi today led his party in a nationwide daylong fast against caste violence, communalism and the non-functioning of Parliament, for which the UPA major blames the ruling BJP.


Congress workers are observing a daylong fast in all state and district headquarters to voice their protest against the BJP government and to promote communal harmony and peace across the country.