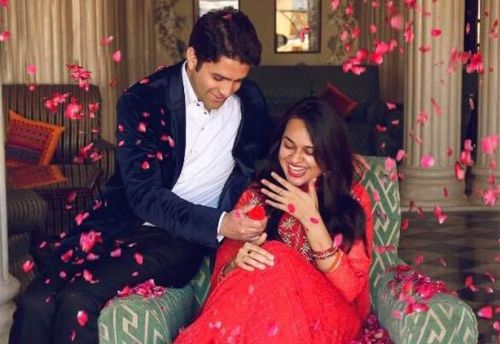 IAS officer Tina Dabi, who topped the UPSC's civil services examination in 2015 has tied the knot to her Kashmiri batch-mate Amir Athar Amirul Shafi Khan, who secured the second rank in the prestigious examination the same year.
The two young IAS officers got married at a ceremony in the picturesque Pahalgam town yesterday.
A graduate of Delhi's Lady Shri Ram college, Tina Dabi shot into limelight after she became the first Dalit to top the prestigious civil services exam in 2015.
The cupid had struck the two officers reportedly during training at Lal Bahadur Shastri National Academy for Administration in Mussoorie.
Family and friends of the couple attended the wedding ceremony which was held at a hotel in Pahalgam in south Kashmir's Anantnag District. Khan hails from Devipora village in Mattan area of Anantnag while Dabi is from Delhi. -- PTI
Photograph: Kind courtesy Tina Dabi/Instagram
« Back to LIVE