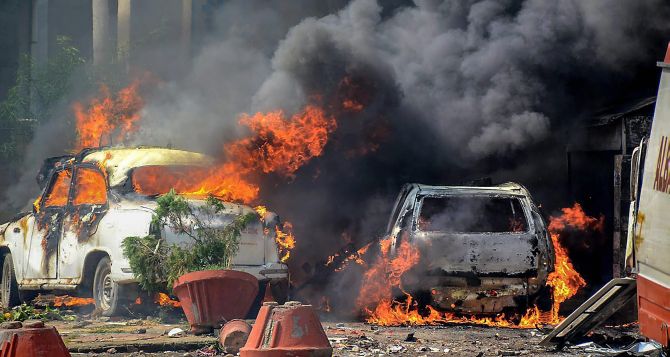 The Centre today rushed 1,700 anti-riot police personnel to Uttar Pradesh, Madhya Pradesh, Rajasthan and Punjab after violence erupted in the four states during a nationwide bandh called by Dalit outfits.

While eight companies of the Rapid Action Force were sent to Uttar Pradesh, four companies were despatched to Madhya Pradesh and three to Rajasthan, a home ministry official said.

An RAF company consists of around 100 personnel.

Two companies of the Border Security Force were sent to Punjab to assist the local administration quell the violence that broke out during the bandh called by Dalit groups protesting against the dilution of the SC/ST (Prevention of Atrocities) Act.

Curfew was imposed in the Morena, Gwalior and Bhind districts of Madhya Pradesh after a student leader was killed in firing and several other people were injured.

Protests turned violent in Agra, Hapur and Meerut in western UP.

The Supreme Court had on March 20 diluted certain provisions of the Scheduled Caste and Scheduled Tribe (Prevention of Atrocities) Act in a bid to protect public servants discharging their 'bona fide' duties from being blackmailed with false cases under the Act.

The ruling has been widely criticised by Dalit groups and opposition parties which claim the dilution of the Act will lead to more discrimination and crimes against the community.   -- PTI

IMAGE: Smoke billows out of burning cars during Bharat Bandh against the alleged dilution of Scheduled Castes/Scheduled Tribes act, in Muzzaffarnagar on Monday. Photograph: PTI Photo
« Back to LIVE