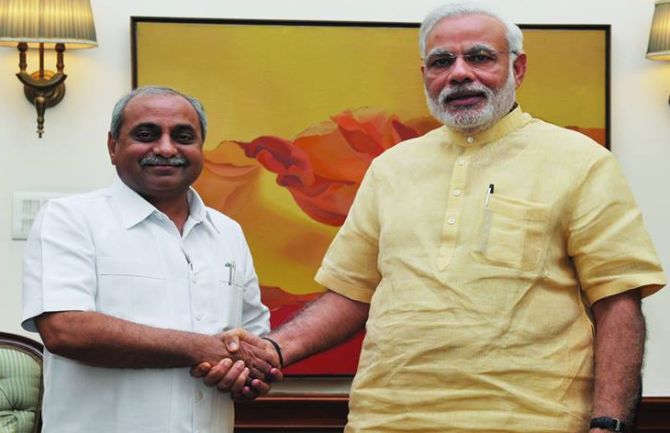 A senior Congress MLA today urged 'aggrieved' Gujarat Deputy Chief Minister Nitin Patel to quit the Bharatiya Janata Party and join hands with his party to form a new government in the state with the help of the '10-15 MLAs' supporting him.

Virji Thummar, who was recently elected as an MLA from the Lathi constituency in Saurashtra's Amreli district, said Patel would be made the chief minister, with the Congress' support, if he came with the required number of BJP MLAs.

"They have taken away all the good portfolios from Nitinbhai Patel. His portfolios have been given to others. I would request Nitinbhai to come with 10-15 supporting MLAs and we (Congress) will support him from outside," Thummar told reporters.

"Let us work together for the benefit of farmers and development of Gujarat. I will tell him (Patel) as a friend that the BJP is only misusing him," he added.

The Congress, however, said Thummar's statement was made in personal capacity and called the political drama unfolding in the new Gujarat government the BJP's 'internal matter'.

"It is the BJP's policy to disregard its senior leaders and sideline them once they find them to be of no use. This has especially been the case with Patidar leaders like Keshubhai Patel, Anandiben Patel, Gordhan Zadaphia among others.

"It is now Nitin Patel's turn. Since we see the portfolio distribution as an internal matter of the BJP, we will not like to go further into it. As far as Thummar's statement is concerned, it is his personal opinion. We are watching the developments," state Congress spokesperson Manish Doshi said.

Patel has reportedly expressed his displeasure to the BJP leadership over the portfolios alloted to him in the new Gujarat government.

The deputy chief minister, who used to handle important portfolios like finance and urban development in the previous government, was allotted roads and buildings and health this time.

He also threatened to call for a state-wide bandh if Nitin Patel was not made the Chief Minister of Gujarat.

Lalji Patel, who is convener of the Sardar Patel Group (SPG) which had launched the Patidar quota agitation along with Hardik Patel-led Patidar Anamat Andolan Samiti, today called on the deputy chief minister at his official residence in Gandhinagar with dozens of supporters.

"The BJP is repeatedly doing injustice to Nitin-bhai Patel. Today I met him with supporters from Mehsana, and we have given a call for Mehsana bandh on January 1 in his support," Lalji Patel told reporters.

Nitin Patel is MLA from Mehsana, which has a sizable Patidar population and which was the epicentre of the quota agitation.   -- PTI
« Back to LIVE