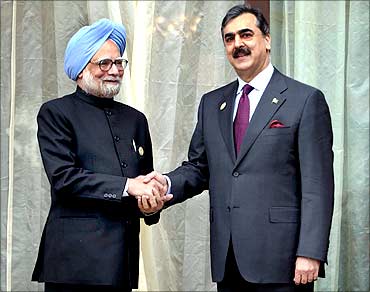 At the SAARC summit in Thimpu, India and Pakistan have, at last, found the mutually suitable language for public use, and while finding the correct diplomatic expressions they have kick-started the process that may eventually reach, at later stage, to broader dialogue or the bigger announcement. Sheela Bhatt analyses the talks from Thimphu.

Both sides were showing harmony in interpreting the meeting, and that itself was an achievement.

The concrete move forward was, as Indian Foreign Secretary Nirupama Rao said, the "two sides have agreed to meet as soon as possible." However, the dates have not been fixed. Rao went as far as saying that "there was confluence of thoughts here that both sides agreed that the dialogue was the only way forward."

She said that both sides want to focus on development and the economy. She even said that "there was lots of soul searching" behind this understanding between the two countries.

However, the talks of Thimphu seem to be scripted in advance. The reactions from both sides suggest that more things will unfold in future and that this is just the beginning.

At the same time, a senior officer accompanying the prime minister suggests, "Do not rush. Proof of the pudding lies in its eating."

It is understood that the proposed meetings by the foreign ministers and the foreign secretaries will give Pakistan the space to act against the 26/11 Mumbai terror attacks accused, which will eventually boost the momentum to resolve the bigger issues.

The year 2010 may or may not be the new beginning, but Thimphu has, certainly, thrown up possibilities. The meeting has resulted in some kind of a framework to reach the negotiating table.

Rao revealed the gameplan of both countries thus, "The two sides have agreed for the need to assess the reasons that undermine the current state of affairs and, to think of a fresh way forward. They have agreed that foreign ministers and foreign secretaries will be charged with the responsibilities for working out the modality for restoring trust and confidence in the relationship, and thus paving the way for substantive dialogue on all issues of mutual concern."

By this way, a high-level interaction is restored without bringing in words like 'composite dialogue.'

The Thimphu talks seem the direct result of secretive diplomacy at the Prime Minister's Office level in New Delhi. Prime Minister Singh's vision to have permanent peace with Pakistan may have got a fresh push after the debacle of Sharam-el-Sheikh.

The Thimphu's talks, which lasted 50 minutes, between two PMs seems to be a well-rehearsed behind-the-scenes exercise to move forward in the public eye. To begin with, to satisfy hawks in India, Singh has conveyed the nation's concerns to Gilani.

She said the PM emphasised to Gilani the various issues concerning terrorism, rise in infiltration and the slow progress in the trial of the Mumbai perpetrators.

Singh went on to note that terror machines operate in Pakistan against India, and that has to be eliminated. Singh also told Gilani that India is willing to discuss all issues of concern and resolve all outstanding matters through dialogue, but the issue of terrorism is holding back that progress.

Singh also talked about Lashkar-e-Tayiba founder Hafiz Saeed. Rao said, "The PM did mention Hafez Saeed. The fact that he is allowed to roam free (in Pakistan) and is engaging in language not conducive to the atmosphere of regional stability."

India has also given some relief to the constituency in Pakistan that dislikes India's insistence in sticking to one or two issues like Saeed. Rao said, "The focus is on charting the course forward. That definitely is the message from today's meeting. The searchlight is really on the future, and not on past."

But, before any hawks in India gets upset, she said, "Our concern about terrorism remains very much on the agenda. PM Singh made it very clear that the public opinion in India is most concerned about this issue, and the issue of terror machine that operates in Pakistan. I think, PM Gilani understands the concerns that we expressed in this regard."

Both sides discussed the trade and transit issue and both sides were completely on the same page.

The supporters of peace in both the countries would rejoice to see that the communication line is open. While hawks on both the sides would find that both the Indian and Pakistani leaders have kept in mind their national interests, and core concerns.

Rao mentioned that Gilani said that Pakistan is serious about prosecuting the perpetrators of the Mumbai attacks and bring the trial of these individuals to speedy conclusion.

Gilani reiterated that Pakistan would not allow its territory for terror activities directed against India. The meeting was an exercise in mutual comprehension, because their lack of mutual trusts in relationship impending the process of normalisation, Rao said.

The language used by both the sides after the meeting was a smart facesaving formula to keep the momentum positive without adding any hype to it.

Singh and Gilani both have agreed that relations between the two countries should be normalised and, the channels of contacts should work effectively to enlarge the constituencies of peace in both countries.

When asked to explain about the foreign ministers' and foreign secretaries' dialogue to set modalities, Rao said, "I don't think we have to get struck with nomenclature here. I think what you should focus is on the fact that both sides have agreed that dialogue is the only way forward. It is essential to open the channels of communication, and that there is a need to restore trust. I believe our concerns were registered on the Pakistani side. They did mention that they have some difficulties with their judicial process in tackling such issues, and we expressed hope that laws in this regard would be strengthened in Pakistan."

Whenever asked straight or sharp questions, Rao coolly said, "I am not going to answer that question in a way you have framed it."

Of course, there are some real issues requiring answers, including Afghnaistan, but for the day, both the governments have agreed to talk less in public. At the end of the Thimphu talks, it was the triumph of pragmatism of PM Singh and PM Gilani.