For tiny Bhutan, hosting the SAARC summit is a big step on the international stage. Thimphu, the nascent democracy's picturesque capital, is throbbing with South Asian leaders who are trying to give a fresh lease of life to the moribund organisation.

The first thing that struck Sheela Bhatt, in Thimphu to cover the summit, was that whiff of fresh air -- opulent and serene. Here are her first impressions on the eve of the summit.

When one attends any South Asian Association for Regional Co-operation there is only one fear. All the recent the SAARC summits are overshadowed by shadow-boxing between India and Pakistan diplomats.

Due to the diplomatic games played by these two countries on this platform, particularly on issue of terrorism and trade, SAARC's broader agenda of great regional co-operation often gets lost.

However, talks invariably veer around the proposed meeting between Prime Minister Manmohan Singh and his counterpart Yusuf Raza Gilani.

The Indian media contingent has arrived ahead of Prime Minister Manmohan Singh. Yash Sinha, joint secretary (Pakistan desk) and Shahid Malik, Pakistan's high commissioner in New Delhi, are already in Thimpu so it's obvious that Dr Singh will meet Gilani, but Indian diplomats insist that "there won't be a structural bilateral meeting like at Sharm-el-Sheikh".

The Indian side maybe underplaying it but Pakistan's foreign minister and even Prime Minister Gilani are sending out signals, insisting that "baaton se hi baat banti hai (only talks can lead to talks)".

Though it's commonly accepted that SAARC lacks dynamism and unity of purpose despite 25 years of life behind it, still many countries -- from China to Iran to Australia -- have been showing an interest in joining the grouping. 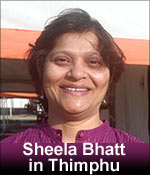 According to reports from Kathmandu, US Assistant Secretary of State for South and Central Asian Affairs Robert O Blake Jr is on his way to Thimphu. Blake, who is leading the US observers delegation, will also hold meetings with regional leaders who are present in large numbers in the Bhutanese capital.

The two-day-summit is scheduled to begin Wednesday afternoon and will conclude on April 29.

The first thing that strikes you when you arrive in Paro international airport is the clean air which is quite alien to our urban lungs. For the first time Bhutan is hosting the summit in its capital city, which is small, clean, orderly and serene.

The hosting of such a huge summit is Bhutan's baby-step on the international stage. The country has just gone through an amazing political transformation. In a first in the world, Bhutan's king Jigme Khesar Wangchuk "forced" democracy on his people by holding an election.

For Bhutan, the execution of the event is no less than New Delhi's efforts to host the Commonwealth Games. For a country with a mere 6,83,407 strong population, this is a big leap forward.

India and Bhutan's relations are steady and strong. Dr Singh will have bilateral meetings with his counterpart Lyonchhen Thinley. It is said that West Bengal will plunge into darkness if Bhutan's power supply is interrupted.

Bhutan's major income is from hydropower.The administration is so dynamic that it has invested wisely, with generous help from India, in the power sector. The Chhukha hydropower project sells its output to India. The energy trade is a win-win situation for both countries.

The summit is already in action with the meeting of the council of ministers.

Foreign Minister S M Krishna told the meeting, "Terrorism poses a serious danger to the economic stability of any civilised society. The South Asian region is particularly afflicted by this menace. The time has come for us to rally against the forces of terrorism that seek to divide and weaken our societies. I extend a call to my fellow leaders to join hands to fight and defeat terrorism, including through the early ratification of regional instruments such as the Convention on Mutual Assistance in Criminal Matters, signed at the last summit in 2008, and early conclusion of the proposed UN Comprehensive Convention on International Terrorism, as directed by our leaders at the 15th SAARC Summit. India, in cooperation with Sri Lanka, is involved in strengthening of the SAARC Terrorists Offences Monitoring Desk and the SAARC Drug Offences Monitoring Desk for sharing of information among our security forces."

This is an interesting move in view of the current tension between India and Pakistan over the 26/11 accused. If and when there is consensus in SAARC over the Convention on Mutual Assistance in Criminal Matters, there will be standard procedures available to SAARC countries in handling accused like Hafeez Mohammed Saeed and even the long-forgotten Dawood Ibrahim.

Didn't we say at SAARC, there is no escaping India-Pakistan covert and not-so-covert diplomacy?

Image: Buddhist monks walk past a power station in Thimphu. Bhutan's major income is from hydro-power.