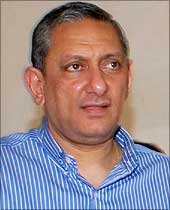 Vinita Kamte has leveled the accusations against Maria in her book, To The Last Bullet. Maria was in charge of the police control room from where the entire counter-operation was monitored and executed in 12 places in Mumbai on 26/11 till the National Security Guard took over on the morning of 27/11.

The Maharashtra government will face a difficult task in the current situation because Maria is an outstanding investigator no home minister would like to lose. Also, Maria has a formidable network of informants. But he also has many enemies within the police force.

Vinita Kamte's book, that carries the allegations against Maria, was launched at the Taj Mahal hotel on Tuesday. On the dais amongst others was Maria's boss, Mumbai Police Commissioner D Sivanandan.

At such a senior level nobody attends a public function without reading the book. It speaks volumes on the vertical divide within the Mumbai police force.

State Home Minister R R Patil will have to walk a tightrope on the issue because Ashok Kamte, Anti-Terrorism Squad chief Hemant Karkare and Senior Police Inspector Vijay Salaskar who died on 26/11, are now local icons.

Not a single police officer, intelligence officer, navy or coast guard officer has been held accountable for the lapses that made the 26/11 attacks possible.

In such circumstances, Maria will have to face difficult questions in the coming days.

If the Maharashtra government supports Maria then it will demolish Vinita Kamte's reputation of being a fearless woman who wants to fight the Mumbai police's slack and irresponsible response on 26/11.

Vinita Kamte and Kavita Karkare, Hemant Karkare's wife, are looked upon with respect. Vinita has been a trend-setter in more than one sense. She has dared to write a book against a high-profile serving police officer.

If the state government supports Maria, her book will be construed as a 'one-sided' and an 'emotional outburst by a slain officer's wife'. On the other side, Maria has a right to defend his work and according to sources close to the police officer he has plenty of papers and facts to support his contention.

On the night of November 25, at around 10.30 pm, Maria hand-delivered a long letter to Chandra Iyengar, the state additional home secretary through a junior officer.

He took three hours to draft his letter because he has attached a detailed rebuttal with his letter expressing a desire to resign if he is not defended.

Maria faces three grave charges. Vinita Kamte says Maria did not send additional forces to the Cama Hospital when terrorists were in the hospital building. From 11.20 pm to 12.07 am, Karkare, Kamte and the others were without much help.

'This is not true,' Maria has said many times. He prepared an entire list of Mumbai's police force, a chart of who was deputed where and when in the first few hours of the 26/11 attacks.

The chart has been given to the Ram Pradhan Committee, the two-member committee appointed to look into the Mumbai police's performance during 26/11.

Maria was summoned three times before the committee and each time he was grilled for more than three hours.

He has given the committee some confidential details of the security position of Mumbai during the desperate fight against the terrorists and how the police took the risk of pulling out police guards from one of the most sensitive postings in the city.

In another shocker the Mumbai police told the Pradhan Committee that more forces were sent to the Cama Hospital than even the Taj Mahal hotel or Nariman House.

Those well-versed with the entire controversy claim that, "It seems that the truth lies somewhere in between."

The additional forces were ordered to go to the Cama Hospital by Maria. According to police records around 150 policemen should have been there before 11.50 pm. Karkare, Kamte and Salaskar were killed around 12.07 am.

If police records show that the forces were asked to go it is possible that during those abnormal times the forces may have reached late. Only the Pradhan Committee report can say with authority exactly how many officers were around the Cama Hospital before the terrorists's bullets killed Karkare, Kamte and Salaskar.

Neither Vinita Kamte nor Maria can be blamed for diametrically opposite interpretations of the same event says an officer who has worked with both Karkare and Maria.

It is believed the Pradhan Committee has gone through the entire Cama Hospital episode and reportedly absolved Maria.

Vinita Kamte has already questioned the Pradhan report. 'It is surprising to note that the persons on whom the Pradhan Committee relied were mostly persons who were themselves interested in covering up their lapses,' she said in her book.

She has confronted Maria at every step since her husband's death.

To begin with, she asked for a police log book that recorded every conversation between the police control room and all the officers deputed in the city at various places.

She was refused access to the log book. Public Prosecutor Ujjwal Nikam, who is trying the government's case in the 26/11 case, also advised the police not to part with the log book.

Vinita Kamte has always claimed that 'How can a police officer's wife be denied information from the department?'

When she made such an aggressive attempt, saying the police force better respect her sentiments, she was allowed to copy a relevant part of it. She copied it with the help of her sister and lawyer. But she was not satisfied with it.

Meanwhile her RTI application asking for the police control room's records was allowed.

The Mumbai police claimed the log book is highly sensitive. Reading it would be a guide for future terrorists; it will help future attackers know how to plan an operation in Mumbai.

Vinita got the log book after her RTI application.

Her other charge is that Maria did not give proper guidance to Karkare and Kamte.

She also claims that Maria hid the facts about their whereabouts and status of their injuries from the then police commissioner Hasan Gafoor.

Maria has replied to all these allegations in detail before the Pradhan Committee. He is confident of his facts because he thinks that Vinita Kamte has been selective in quoting the conversations that took place between the police control room and Karkare and others on that night.

A Mumbai police source, who has gone through crucial parts of the log book, says, "Vinita Kamte is an emotional and angry lady. By writing a book she has got the satisfaction of hitting out at Maria, but she has also damaged the police force."

The source details how Vinita selectively quoted the log of the police control room giving details of conversations that took place on the night of 26/11.

Meanwhile, Maria is holding his cards close to his chest and waiting for the government to defend him.

'Karkare's team had no reinforcements, no briefing'