Retracing my father's footsteps in Sharm-el-Sheikh 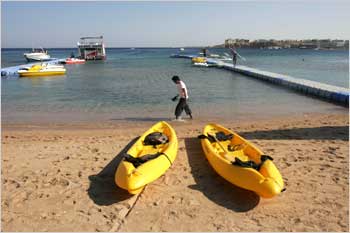 As part of the media team accompanying Prime Minister Manmohan Singh to Egypt to take part in the 15th Non-Aligned Movement Summit meet, I couldn't help but feel a sense of anxiety.

I was walking the streets of the place where my father was posted in 1961 as a young officer with the United Nations Emergency Force. Then Captain Ramamohan Rao, he was sent to the United Nations emergency force in Gaza strip as part of the Indian contingent.

Besides being the public relations officer of the Indian contingent, he also functioned as the deputy public information officer of the six-nation force entrusted with the task of maintaining peace along the Armistice Demarcation Line between Israel and Arab countries.

He later returned to India and retired as principal information officer to the Government of India after having served under four prime ministers as a spokesman of the country. His room in south block in the prime minister's secretariat was next to the financial advisor's room, Dr Manmohan Singh.

As I land in Sharm-el-Sheikh, at the southern tip of the Sinai Peninsula, it is hard to imagine that this 'city of peace' as the name literally translates in Arabic, could have been a war zone at some time in history. But it was.

Sharm-el-Sheikh was captured by Israel during the Sinai conflict of 1956 and restored to Egypt in 1957. A United Nations peace-keeping force was subsequently stationed there until the 1967 Six-Day War when it was recaptured by Israel.

Sharm el-Sheikh remained under Israeli control until the Sinai Peninsula was returned to Egypt in 1982 after the Israel-Egypt Peace Treaty of 1979.

In 1961, my father was appointed editor of the Force journal The Sand Dune and he had to report on the task of the Indian contingent, as well other five other contingents from Brazil, Sweden, Denmark, Yugoslavia and Canada.

He had to report on how effective the patrolling of the armistice demarcation line was. Young Captain Rao's dispatches and human interest stories of the soldiers living far away from their families were appreciated by many country representatives.

But the Canadian public relations officer, Captain Cosgrove, wasn't happy when 'a person from a non-English speaking country' was appointed editor. He questioned the young Indian's ability and refused to work under him.

In today's world, Cosgrove would have been sent back for making a racist remark, but in those days it was not considered out of ordinary. 'Instead of picking a fight, I went to Rafah and reported on the exemplary work being done by the Canadian force which provided the air-link for the Force. The article found its way into Canadian newspapers and Cosgrove won praise for what was essentially my dispatch. Captain Cosgrove had the grace to come up to me, offer me a beer and then happily worked in my team.'

In 1961, my father travelled all along this region where UN forces were working, he reported on the seemingly ceaseless task of maintaining peace in the Arab Israel region.

He wrote, 'It isn't easy to fight in a foreign country for a foreign cause because patriotism is not the motivating factor here. But I saw the battalion commander reminding his forces that the country had assigned them a task and that was to be honored. The task had to be fulfilled. That was the mandate accepted by India, it was to be upheld by the soldier.'

It was in 1961 that he worked here as a reporter. I returned in 2009 as a reporter too. But what a difference in the world and in India. The India he represented in 1961 was a fledgling democracy; it was struggling to establish itself in the world polity.

The India I represent rubs shoulders with the rich nations of the world. Then it was the object of ridicule of the United States for wanting to establish the Non-Aligned Movement.

Today, the same United States has a strategic special partnership with us and the Indian prime minister is clearly the most important personality at the Non-Aligned Movement Summit meet.

In 1961, India still believed 'Hindi-Chini bhai-bhai' was Peking's intention, Nehru was prime minister, Rajiv Gandhi was in high school, Dev Anand was a young man, Mughal-e-Azam was released, one day cricket wasn't born, the states of Maharashtra and Gujarat were carved out of the state of Bombay and India had fought one war with Pakistan.

It was a difficult time for sure, except that in the Gaza Strip and Egypt people spoke of Nehru and Nasser in the same breath as founders of the Non-Aligned Movement. For them, my father was Ramadan Rao and not Ramamohan Rao.

When I wrote this story from the swanky media room in a plush hotel in Egypt, I had available to me a plethora of communication platforms to send my story. My father had a rickety manual typewriter and a Rolleiflex camera. He used a telex machine and typeset print. Know what that means?

Image: The Red Sea resort of Sharm el-Sheikh in Egypt.

PHOTOS: AAP celebrates after win over BJP in Delhi