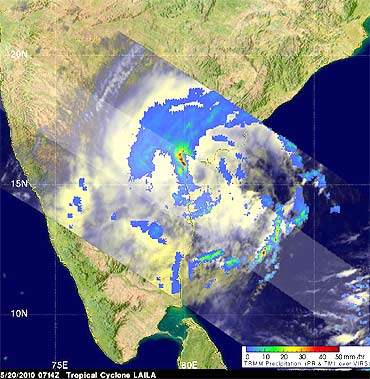 Image: An image captured by TRMM of Laila's rainfall on May 20 at 3.14 am EDT. The red spots indicate heavy rainfall
Photographs: NASA/SSAI, Hal Pierce

Coastal areas of Andhra Pradesh which bore the brunt of cyclone Laila received an average of about two inches of rainfall per hour, according to data collected by a satellite of the National Aeronautics and Space Administration.

The Tropical Rainfall Measuring Mission satellite, which flew over the cyclone on Thursday, showed that the heaviest rainfall was received just southeast of the centre of circulation and along the coast.

The centre of the storm was close to the town of Bapatla, one of the historical towns and mandals of Guntur district of Andhra Pradesh located 40 miles south of Guntur city, the TRMM images showed.

It also recorded that the maximum sustained winds in the region was about 50 knots, or 57 miles per hour at 5 am.

The TRMM is a joint mission between NASA and the Japan Aerospace Exploration Agency designed to monitor and study tropical rainfall.

It not only measures rainfall intensity from space but can also give scientists an idea about the height of a thunderstorm that is generating the rainfall within the tropical cyclone. Tropical cyclones are made up of hundreds of thunderstorms.

Rain rates are calculated from different instruments onboard the satellite such as the TRMM Precipitation Radar, the only space borne radar of its kind, and the TRMM Microwave Imager.

The rain rates are then overlaid on infrared data from the TRMM Visible Infrared Scanner to create the entire image. The final images are created at NASA's Goddard Space Flight Center, in Greenbelt Maryland.

Laila moved at 19 km per hour 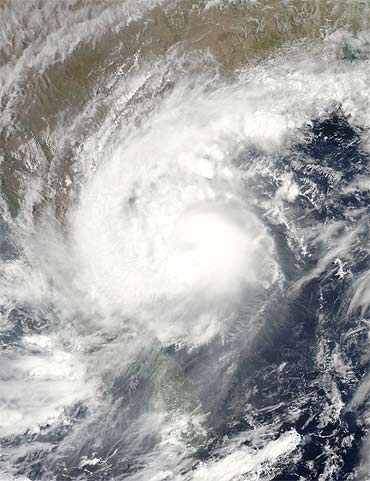 Image: Image captured by NASA's Aqua Satellite MODIS of cyclone Laila off the Indian coast at 4.10 am EDT on May 19
Photographs: NASA/Goddard/MODIS Rapid Response

According to the satellite data, Laila was moving north-northwestward at 10 knots, or 12 miles or 19.3 km per hour.

The Joint Typhoon Warning Centre noted that as Laila "follows this path it will encounter the rugged terrain of northeastern Andhra Pradesh and weaken".

"However, a formidable remnant low is expected to reemerge over the northern Bay of Bengal after 72 hours and accelerate east-northeastward toward eventual landfall over or near south-eastern Bangladesh," the US Navy's warning centre said.

The Centre also warned that residents along coastal areas of Andhra Pradesh and Telangana in other areas in Laila's path can expect widespread heavy rainfall and gusty winds. Seas will also be rough, and fishermen were advised by the India Meteorological Department to stay out of the ocean.

At least 17 people were killed and three others were missing as the cyclone left a trail of devastation in coastal areas of the state damaging road networks and destroying crops.

More
© Copyright 2022 PTI. All rights reserved. Republication or redistribution of PTI content, including by framing or similar means, is expressly prohibited without the prior written consent.
Print this
article