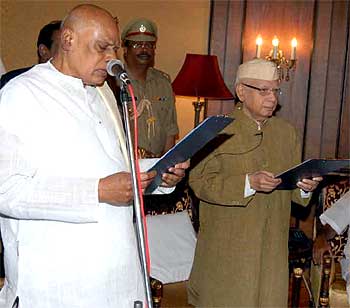 Finance Minister K Rosaiah was sworn-in as new chief minister of Andhra Pradesh on Thursday. He succeeds Dr Y S Rajasekhara Reddy, who died in a helicopter crash on Wednesday.

Rosaiah was administered the oath of office and secrecy at a simple ceremony by Governor Narayan Dutt Tiwari at the Raj Bhavan.

Meanwhile, the state government has announced seven-day mourning from Thursday as a mark of respect to late Dr Rajasekhar Reddy. The national flag would be flown at half-mast during this period of mourning throughout the state.

AP: Vijayshanti all set to quit TRS and join Cong