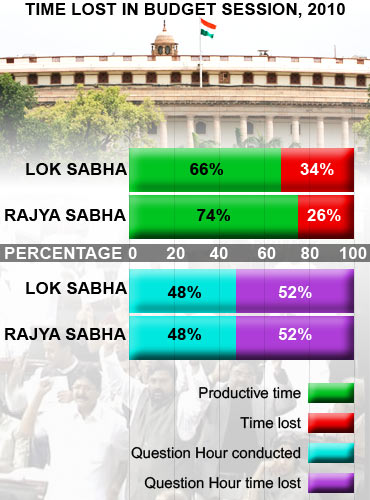 A graphical look at the performance of our MPs in both Houses of Parliament during the Budget session. Research, analysis and charts: Courtesy PRS Legislative Research. Graphics: Reuben N V.

A study a few years ago calculated that it took about Rs 25,000 to run Parliament for a minute. So not even making allowance for inflation the disruptions and adjournments during the just-concluded Budget session cost the taxpayer about Rs 180,000,000!

These frequent disruptions and walkouts led to a wastage of 115 working hours out of a planned 385 hours of both Houses. The Lok Sabha lost 70 hours or 36 percent of its scheduled time due to walkouts and disruptions while the Rajya Sabha lost 45 hours or 28 percent.

The total productive time in Lok Sabha was 138 hours or 66 per cent of its scheduled time, while it was 130 hours, or 74 per cent, in the Rajya Sabha.

Legislative performance lagged during this session 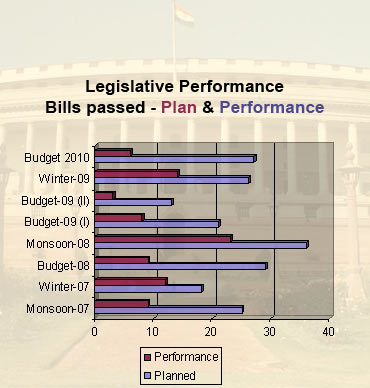 The government could only get six of the 27 planned bills cleared during this session.

However, the session saw over 75 percent attendance by MPs in both Houses, higher than the previous session.

The average attendance by MPs in the Lok Sabha was 79 per cent; it was 78 per cent in the Rajya Sabha.

Attendance in Parliament was higher than the last two sessions 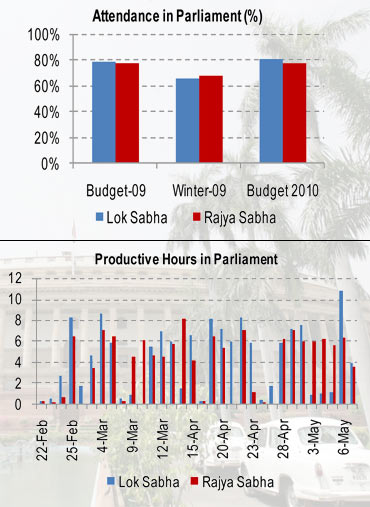 Image: Attendance in Parliament was higher than the last two sessions

The productivity of both Houses increased as the session wore on.The first two days of the session had less than an hour of work done in both Houses. May 5 saw a record 11 hours of productive work done.

Participation of MPs in the Lok Sabha's proceedings 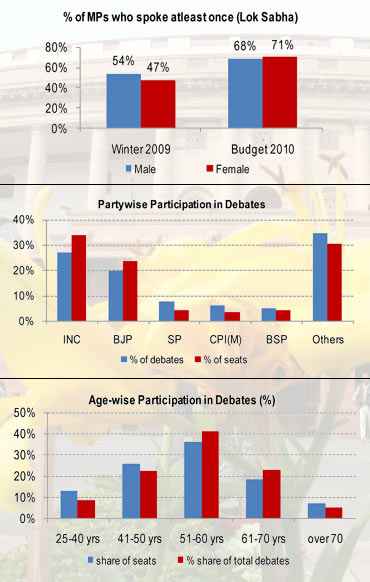 Image: Participation of MPs in the Lok Sabha's proceedings

Excluding ministers, 32 per cent of MPs did not participate in any debates this session compared with 47 per cent of such MPs in the Winter session in 2009.

Sixty eight per cent of men and 71 per cent of women MPs participated in at least one debate this session.

Sixty eight MPs spoke on the issue of price rise, the most besides the Budget discussions.

MPs representing 7 small parties (1 or 2 seats) did not speak in any debate during this session.

Only six bills were passed this session 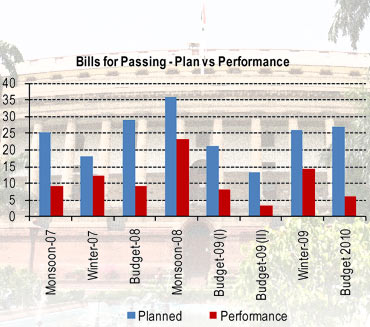 Image: Only six bills were passed this session

The government passed just six out of the scheduled 27 bills scheduled to be passed this session.

Fourteen bills were passed in the previous session.

2 in 5 bills were passed without discussion! 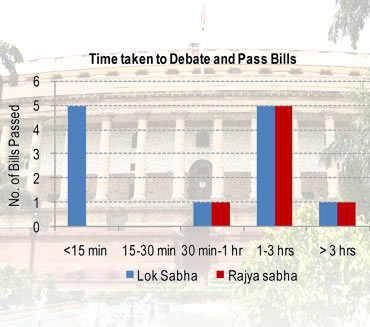 Image: 2 in 5 bills were passed without discussion!

The Lok Sabha passed 12 bills this session. Five of these bills were passed with less than 15 minutes of discussion.

The Payment of Gratuity (Amendment) Bill 2010 and the Clinical Establishments (Registration and Regulation) Bill 2010 were passed within five minutes.

Is the Question Hour being put to good use? 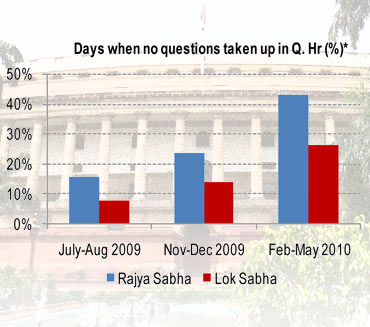 Image: The Matter of Question Hour

In the Rajya Sabha, no question could be answered orally on 13 of the 30 days.

In the Lok Sabha, no question could be answered verbally on eight of the 30 days.

In the Lok Sabha, 12 per cent of the total starred questions were answered orally.

The previous Winter session saw 18 per cent of such questions answered.

Budget demands of only 3 ministries discussed 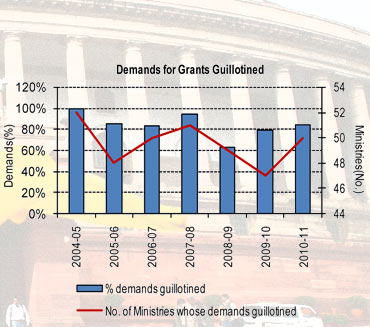 Parliament usually cannot discuss the demands for grants of all ministries, hence some select demands are discussed at length and the rest are guillotined (put to vote together without discussion).