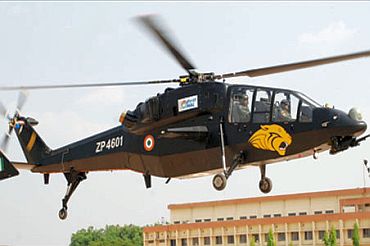 Image: Light Combat Helicopter's first flight
Ajai Shukla in New Delhi
As the helicopter taxied slowly along the airstrip, a little knot of designers and executives from Hindustan Aeronautics Limited (HAL) watched silently, the sweat beads on their foreheads from more than just the Bangalore heat.

March 29 had been selected for a landmark attempt: The first flight of the indigenous Light Combat Helicopter (LCH). Already a year late, and facing criticism for having gone several hundred kilograms overweight, the LCH had much to prove.

At 3.30 pm, the twin Shakti engines roared to a crescendo and the LCH pilots, Group Captains Unni Pillai and Hari Nair, lifted off the ground. The futuristic helicopter, all angles and armoured sheets, flew for a distance just a few feet above the runway; then cheering and clapping broke out as it climbed to 50 feet.

Over the next 15 minutes, Pillai and Nair put the LCH through its first flight test, doing a clockwise and then an anti-clockwise turn, hovering motionless and circling the airport four times. about the Light Combat Helicopter 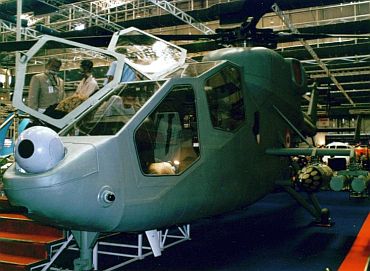 In high-altitude performance, the LCH will be in a class by itself: Taking off from Himalayan altitudes of 10,000 feet, operating rockets and guns up to 16,300 feet, and launching missiles at UAVs flying at over 21,000 feet.

A feared predator in the modern battlefield, the attack helicopter is a key weapon system against enemy tanks. Once an enemy tank column is detected, attack helicopters speed to confront them, flying just 20-30 feet high to avoid radar detection with enemy rifle and machine-gun bullets ricocheting off their armoured sides. Hiding behind trees or a ridgeline, they pop up when the tanks are about 4 kilometres away to fire missiles that smash through a tank's armour.

Reasons behind the delay 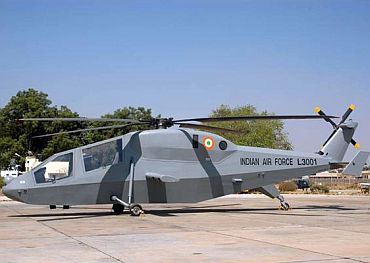 "It is a big day for all of us, especially those involved in the LCH's design and fabrication," Ashok Nayak, chairman and managing director of HAL, told Business Standard. "We were going to have the first LCH flight in December but, for one reason or another, it kept getting delayed."

Excess weight has been the main reason for the delay in the LCH programme. The heavy armour needed for protection against enemy fire conflicts with the need for a light, highly mobile helicopter that can twist and dodge and hover stationary to allow pilots to aim and fire their missiles.

The LCH was supposed to weight just 2.5 tonnes when empty; but the design team found that it actually weighed 580 kg more than that. At lower altitudes, this would not be a significant drawback. But, at the LCH's flight ceiling of 6,000 metres (almost 20,000 feet), this would significantly reduce the LCH's payload of weapons and ammunition. 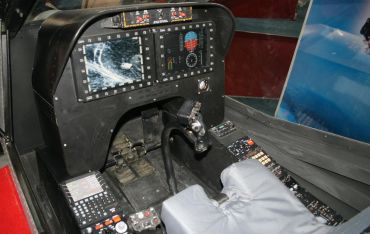 Last September, the chief of HAL's Helicopter Complex, R Srinivasan, told Business Standard that the LCH's weight would be progressively reduced over the first three Technology Demonstrators (TDs) of the LCH.

HAL chief Ashok Nayak confirmed on Tuesday that this schedule was on track. "The weight reduction that we had targeted for TD-1, which flew on Monday, has been met. The second prototype, TD-1, which will make its first flight by September, will be lighter still."

The Indian Air Force (IAF) has said that it needs 65 LCHs; the army wants another 114. 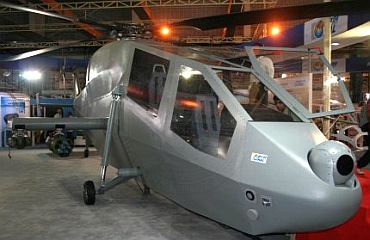 If the development programme is not delayed further, the LCH will enter service by 2015-2016. To meet its needs till then, the Ministry of Defence floated a global tender for 22 attack helicopters. With only three companies responding, that tender was cancelled last year.

But HAL remains confident since most of the key technologies in the LCH -- e.g., the Shakti engine, the rotors and the main gearbox -- have already been proven in the Dhruv Advanced Light Helicopter, 159 of which are being built for the army and the air force.

Simultaneously, the LCH's weapons and sensors are being tested on a weaponised version of the Dhruv. These include a Nexter 20 mm turret-mounted cannon, an MBDA air-to-air missile, and an EW suite from SAAB, South Africa. India's Defence R&D Organisation (DRDO) is developing an anti-tank guided missile (ATGM) for the LCH. Based on the already developed Nag ATGM, the HELINA (or HELIicopter-mounted NAg) missile can destroy tanks from a distance of seven kilometres.
More