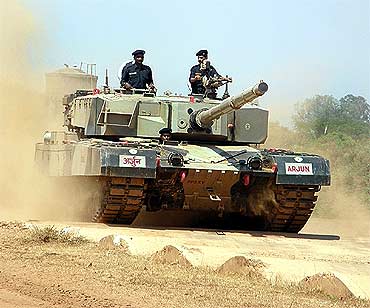 India's home-built Arjun tank has emerged a conclusive winner from its showdown with the Russian T-90. A week of comparative trials, conducted by the army at the Mahajan Ranges, near Bikaner in Rajasthan, has ended; the results are still officially secret.

But, Business Standard has learned from multiple sources, who were involved in the trials that the Arjun tank has outperformed the T-90 on every crucial parameter. The trial pitted one squadron (14 tanks) of Arjuns against an equal number of T-90s.

Each squadron was given three tactical tasks; each involved driving across 50 kilometres of desert terrain and then shooting at a set of targets. Each tank had to fire at least 10 rounds, stationary and on the move, with each hit being carefully logged. 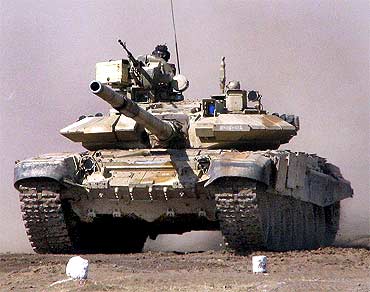 Image: A Russian T-90 in action

The trials also checked the tanks' ability to drive through a water channel 5-6 feet deep.

The Arjun tanks, the observers all agreed, performed superbly. Whether driving cross-country over rugged sand-dunes; detecting, observing and quickly engaging targets; or accurately hitting targets, both stationery and moving, with pinpoint gunnery; the Arjun demonstrated a clear superiority over the vaunted T-90.

"The Arjun could have performed even better, had it been operated by experienced crewmen," says an officer who has worked on the Arjun.

"As the army's tank regiments gather experience on the Arjun, they will learn to exploit its capabilities." With the trial report still being compiled -- it is expected to reach Army Headquarters after a fortnight -- neither the army, nor the Defence R&D Organisation (DRDO), which developed the Arjun tank in Chennai at the Central Vehicles R&D Establishment (CVRDE), are willing to comment officially about the trials.

Critics have been silenced 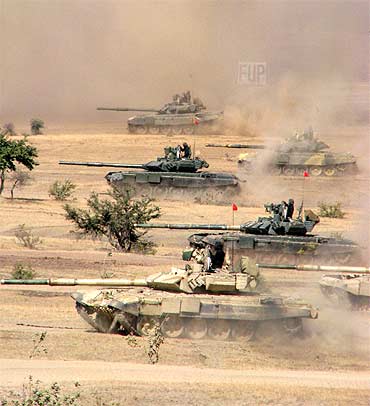 Image: Indian battle tanks in action during an exercise

The importance of this comparative trial can be gauged from a list of those who attended.

Over the last four months, the army had systematically signalled that it did not want to buy more Arjuns. The message from senior officers was -- 124 Arjun tanks have been bought already; no more would be ordered for the army's fleet of 4000 tanks. The comparative trial, or so went the message, was merely to evaluate what operational role could be given to the army's handful of Arjuns.

"The senior officers who attended the trials were taken aback by the Arjun's strong performance," an officer who was present through the trials frankly stated. "But they were also pleased that the Arjun had finally come of age."

The army's Directorate General of Mechanised Forces (DGMF), which has bitterly opposed buying more Arjuns, will now find it difficult to sustain that opposition.

Why spend crores on obsolete tech 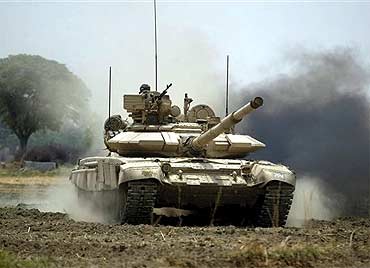 In keeping out the Arjun, the DGMF has opted to retain the already obsolescent T-72 tank in service for another two decades, spending thousands of crores in upgrading its vintage systems.

Now, confronted with the Arjun's demonstrated capability, the army will face growing pressure to order more Arjuns. The current order of 124 Arjuns is equipping the army's 140 Armoured Brigade in Jaisalmer.

With that order almost completed, the Arjun production line at the Heavy Vehicles Factory (HVF) in Avadi, near Chennai, needs more orders urgently. The Rs 50 crore facility can churn out 50 Arjuns annually. That would allow for the addition of close to one Arjun regiment each year (a regiment is authorised 62 tanks).

Tank experts point out that conducting trials only in Mahajan does not square with the army's assertion that they are evaluating a role for the Arjun. 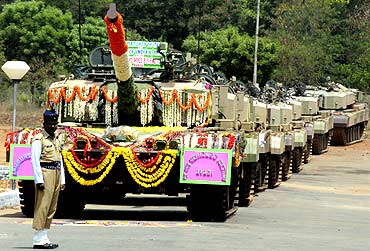 Image: A batch of Arjun tanks being inducted into the Indian Army

Says Major General HM Singh, who oversaw the Arjun's development for decades, "If they were evaluating where the Arjun should be deployed, they should have conducted the trials in different types of terrain: desert, semi-desert, plains and riverine. It seems as if the army has already decided to employ the Arjun in the desert."

The Arjun's sterling performance in the desert raises another far-reaching question: Should the Arjun -- with its proven mobility, firepower and armour protection -- be restricted to a defensive role or should it equip the army's strike corps for performing a tank's most devastating (and glamorous) role: attacking deep into enemy territory during war?

Each strike corps has 8-9 tank regiments. If the army recommends the Arjun for a strike role, that would mean an additional order of about 500 Arjuns.

But Business Standard has learned that senior officers are hesitant to induct the Arjun into strike corps. Sources say the Arjun will be kept out of strike formations on the grounds that it is incompatible with other strike corps equipment, e.g. assault bridges that cannot bear the 60-tonne weight of the Arjun.