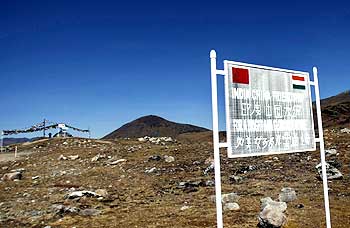 Image: A signboard on the Indo-China border at Bumla, Arunachal Pradesh.
Photographs: Adnan Abidi/Reuters
The Leh district administration sent a note to the home ministry in New Delhi in January about China occupying large swathes of Indian territory in the Ladakh region of Jammu and Kashmir over the years. The note says this mainly due to the Line of Actual Control -- LAC -- separating India and China not being clearly demarcated because of which India had lost substantial amount of land in the last two decades.

It was also identified that 'there is a lack of institutional memory in various agencies as well as clear policy on this issue, which in long run has resulted in loss of territory by the India in favour of China.'

An Indian diplomat, who has studied the India-China border problem very closely, in a discussion with rediff.com's P Rajendran, discusses the nuances of the border problem and why there is a need to put aside nationalist sentiments and to arrive at a practical solution. He cannot be identified by name for this interview as he currently serves in a senior diplomatic post.

Could you discuss the strategy China is using on border issues with India?

In the past the Chinese overall position vis a vis the boundary question was that provided the two countries are able to accept the need to adopt a policy of what they called 'mutual understanding and mutual accommodation and mutual adjustment', which was one of the major undergirdings of the understandings during the Rajiv Gandhi visit in 1988, it would be possible to work out an agreed resolution of the boundary question.

It was understood that if there was difficulty in reaching an agreement during actual discussions of the territorial implications of such 'mutual accommodation and mutual adjustment,' this could be left to succeeding generations to handle.

Over the years, India and China have adopted a certain patrolling policy 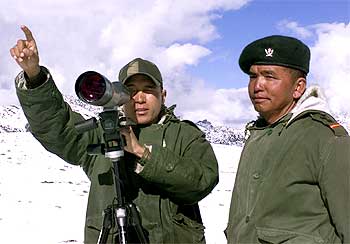 Image: An Indian soldier points towards the border with China in Tawang, Arunachal Pradesh.
Photographs: Utpal Baruah/Reuters
That's only Arunachal (Pradesh, on India's northeastern border), right? Because in Aksai Chin (bordering Jammu and Kashmir), there are few people.

No, it's not only necessarily Arunachal; it would be a principle for the entire boundary. In the middle sector there are areas -- there are very small areas but important ones. So you needed to follow the principle of settled populations not being disturbed in various areas.

(Then) there's the need for both sides to avoid being seen as making any kind of aggressive patrolling movements. But how would one define aggressive postures during patrolling?

When there is a possibility of the two sides having a face-off during patrolling or adopting what some in Indian would call 'doggo position' (when you lie on the ground ready to shoot) that is a situation where there is a danger of potential confrontation, if not actual conflict.

At least there is a sense of tension in such situations relating to patrolling in areas of overlap, where there are overlapping patrolling jurisdictions. People have been going and patrolling in areas where, for various reasons, in both the eastern and western sectors, the line of actual control has itself been disputed.

And each (country) has adopted, over years, a certain patrolling policy. And the policy has been such that you don't come into actual contact but you go over when they are not there and they go when you're not there -- and they keep dropping telltale signs.

Do Indians also do it?

Not cigarettes. It's about rocks being painted red...

No, well, there have been things like that done (by Indians, too). We also have been doing it. You have seen an established pattern. Perhaps in some years (patrolling) has been more, some years it has been less. I don't think there has been a major change in areas where these differences may have emerged.

What is different about the recent developments, as far as I can understand, is that since on Indian side we are talking of moving forward to actually find a solution, the Chinese side may have decided that it is necessary to modify their earlier stand of leaving it to the future generations.

If you're not going to leave it to the future generations, then you have to establish some facts on the ground. 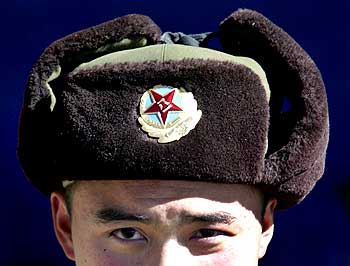 Image: A Chinese soldier.
Photographs: Rupak De Chowdhuri/Reuters
So do you think China is pushing the issue?

I think they are pushing the issue a little more now, not so much in establishing facts on the ground in terms of territory but in terms of trying to strengthen the arguments they have been making. In that sense the arguments they are making regarding Arunachal Pradesh would seem to follow logically because they've always taken a position that Arunachal Pradesh is disputed and that certain areas are even more disputed.

In certain areas -- Tawang comes to mind -- they are trying to strengthen their effort to establish a certain alternate kind of perceptions of where accommodation should be made by the Indian side. This argument (the Chinese) have been making earlier too but they are pressing it a little more persistently now.

In the eastern sector there has been clearly an LAC (Line of Actual Control) accepted by the Chinese since 1959 which conforms basically to what they call the 'illegal McMahon Line.' Whether they thought it was illegal or not they did recognise the McMahon Line.

Today, for example, you have much improved survey systems -- satellite surveying, etc -- and you might find that the description of our borders in that area may be quite out of tune with what the actual (topographical) features on the ground are. The (old details) are based on line of sight surveys. That range, you may say, looking from here, constitutes the watershed. But you may find actually there is another range beyond. These facts can be validated today through new techniques. 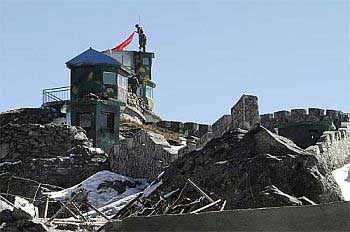 Image: Chinese soldiers put up a flag atop their post at the India-China trade route at Nathu-La Pass.
Photographs: Reuters
India has been saying we have to take the highest peaks (as defining the border).

There are certain principles we've agreed to, but that were not necessarily agreed to by them when applied on the ground. They've been going very literally in applying what is called the Line of Actual Control. And sometimes that kind of literal interpretation of what is indeed a line drawn with a thick pen on a map can be differently interpreted on the ground.

When it is a difference between the peak and a river, where it suits them they take the river. These are the kind of differences that are faced when you actually apply the general principles.

When it has to be a question of territorial delineation -- even at the cartographers' level -- it can be very difficult, because land is very sacred. Neither the Chinese nor we are quite so 'giving' when it comes to issues relating to territory.

But India has even a bigger issue because any government that effects a compromise will be accused of going against the resolution (in Parliament) right?

There have been many governments in the past -- both BJP (Bharatiya Janata Party) and Congress governments -- who may have been willing to look at that. There is, of course, a strong perception that any Indian governments will fall if it were to move in that direction.

My own sense is that they will not if they take a very strong and politically reasonable position based on a need for us to reach a long-term and stable settlement of the issue.

But the fact is we've not reached there because there is a large load of emotional baggage. I do not say this in a negative sense. Because we have a good case. Certainly, in the eastern sector it is a very good case.

The Johnson Line (which places Aksai Chin within India)? 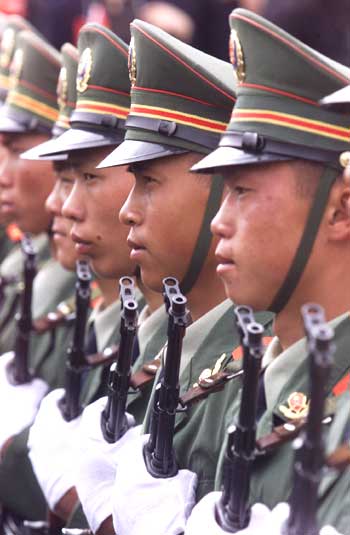 I don't know how you can say that just because Aksai Chin is a barren area.

But in a sense you have to accept realities. And that's what (1988 did for us. Then prime minister) Rajiv Gandhi's big first step was to accept that we needed to (get) a much greater sense of reality, and proceed on the basis of the need to have to eventually make some kind of adjustment. Some kind of adjustment has to be made.

We may not be able to go by pristine lines even on the basis of the argument that, oh, this is legal. Even the resolution of Parliament was that we will not give up any Indian territory.

We've got to decide what that Indian territory is. I think it is important for us to realise that there are areas where there are genuine differences.

These days, more in the Chinese side than us, there is a tendency to project unreasonableness on to the other side. We've also suffered from that (on our side) in the past but we're now seeing it a lot more on the Chinese side.

But that is also because they've strengthened their borders around China, not just with India...

Yes. Why do people adopt ideological positions? If they have strong and rational arguments, they are likely to be willing to discuss the matter. When there is a situation where there are fears, complexes, and suspicions, that is when they become (defensive).

In the Xinjiang (abutting Aksai Chin) and Tibet (which, China claims, includes Arunachal Pradesh) autonomous regions, China has a problem. They could therefore be seeing things in slightly ideological terms.

We think we're ready to have a practical, rational, logical kind of discussion whereas on the other side there is this kind of defensiveness. And that such defensiveness is expressing itself in a more aggressive public discourse. But China has settled its border problems with all countries except Bhutan and India. This has been done through diplomacy.

True the maritime borders -- the Spratly (islands, which China, Taiwan, Brunei, the Philippines, Malaysia and Brunei claim) etc are not resolved. It is only the land border.

Yes, but the land border is more extensive.

They fought wars with some of these countries. So it is not as if fighting a war means that your mental horizon remains frozen. It's not. The Russians have managed to get over that freeze, the Vietnamese have managed.

In a manner of speaking, India has also managed, but we've never managed to push it into a situation where we could clinch an agreement with China.

Partly, I think we've taken the view that time will heal things. I think many previous foreign secretaries have discussed with their political leaders (and suggested) that to assume that at a future stage we'll probably be stronger and therefore we'll be in a better position may miss the possible point that the other side may also be stronger and therefore be in a better position to negotiate.