Sign in  |  Create a Rediffmail account
Rediff.com  » News » Exclusive: L K Advani on the Emergency and after

Exclusive: L K Advani on the Emergency and after 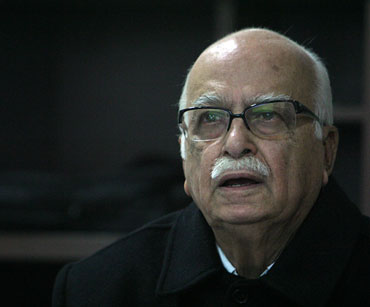 Image: L K Advani
Photographs: Rajesh Karkera
Looking back at the dark days of the Emergency when Indira Gandhi became a virtual dictator, L K Advani, who was imprisoned during those days, feels subsequent governments still have not hesitated in committing excesses.

In the concluding part of his interview, he told Rediff.com's Sheela Bhatt that the basic tendency towards authoritarian rule persists and no political office any where in the world holds as much clout and influence over society as it does in India.

Part I: Exclusive: L K Advani on the Emergency

What forced Mrs Gandhi to withdraw the Emergency? Many argue that she had no compelling reasons to do it.

Even though there was no compulsion, internationally she got a bad name, particularly in the West. She was greatly influenced by it and opted for elections to regain goodwill.

Secondly, the Intelligence Bureau told her there was nothing to worry and that she would win hands down. Also, Sheikh Mujibur Rehman's assassination on August 15 in Bangladesh shocked Indira Gandhi and made her realise that the kernel of democracy must be maintained. This could be one of the significant reasons behind her decision to go for polls.

In fact, in August the National Herald had advocated the one-party system but a fortnight later the Herald changed its stand and said that Indira Gandhi was not thinking in terms of a Constituent Assembly or a new Constitution.

At that time there was an atmosphere of fear and intimidation. Hum ko to log bhool gaye the (the people had forgotten us).

Excesses were committed in North India while implementing the family planning programme, but in South India nothing happened. In the 1977 election, the Congress party drew a blank in the whole of North India, but got 40 out of 42 seats in Andhra Pradesh.

Indira Gandhi was confident of winning in 1977, but she didn't. We were surprised by the results. 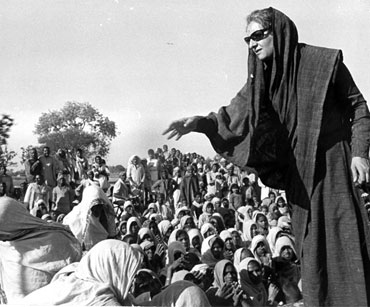 You forget only what you know. When M J Akbar was editing The Asian Age he once called me to say that young Delhi journalists don't know about the Emergency. They may know that the Emergency was imposed but had no clue about the repression that took place.

Do you think the stain of autocracy -- or we should say dictatorship -- has been removed from the Congress party's DNA?

No. In fact, whoever forms the government doesn't hesitate in committing excesses, even some of our people.

Power corrupts and nobody wants to let go of it once they have it.

No political office anywhere in the world holds as much clout and influence over society as it does in India. I say that because the political office holder is the only person in the country whose influence is far more than his or her innate merit.

I tell my party colleagues in private meetings that there is a lot more arrogance in India. In America, say if a scientist, lawyer, artist, senator and plumber live in a certain locality, the senator won't claim he is bigger than the scientist. People have their own standing because of their talent.

In Hindustan, even a municipal corporator thinks he is bigger than a scientist. I have maintained that in India just as political office gives influence and respect far in excess of his or her basic merit, the same is true for journalists too.

One of the reasons is casteism. Caste invests a position which a person may or may not have gotten otherwise. Despite democracy, in India caste gives a dimension which is not present in any other country.

'No government will contemplate imposing an Emergency of that type again' 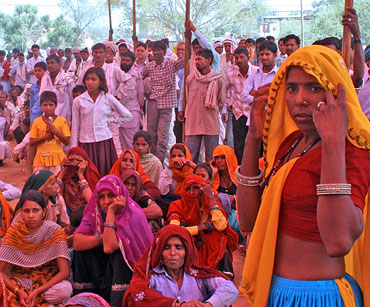 Image: An election rally in Dausa, Rajasthan
Photographs: Rajesh Karkera
You have said many times that Jawaharlal Nehru's gift to India is democracy. Then, in Indira's time came the Emergency. Do you think the democracy that started with Nehru's tenure became stronger after the Emergency?

No government will contemplate imposing an Emergency of that type again. But the basic tendency towards authoritarian rule is still there.

The biggest lesson of the Emergency was that the ruling party's commitment to democracy and its attributes was skin deep. I think we need electoral reforms. I also believe we should have a fixed term for Parliament.

I have been participating in elections since 1952. At that time, the ballot paper was made of glazed paper with the Ashok Chakra. Its size was similar to a one rupee note. If there were nine candidates in a constituency, there would be as many boxes. We had to select the box of the candidate.

Even in the first election people used wrong means, they told us not put our vote in the box. These people would stand outside the room and ask us to give away ballot papers in exchange for five rupees! During those days, five rupees was a big amount.

In the first two elections, the Scheduled Caste and Scheduled Tribe constituencies had double members. Two people, one scheduled caste and one general member, used to get elected and those two elected people represented the constituency.

When the women's reservation debate was on I had suggested double member constituencies. Today's elections are democratic, but I strongly feel money and muscle power have increased too much. Corruption is not decreasing.

When you see young blood around you inside the Lok Sabha, do you think they value democracy?

I don't see anything wrong in them. Some political families are promoting their children. We (the BJP) have 116 members. In the last Lok Sabha, I had held state-wise meetings with all members.

This time I met all BJP members, age-wise. I found most MPs had been MLAs or in some local self-government. Meaning they were in politics when they were young. We have not promoted our families but we have young blood.

The Congress party has the tendency to promote their own families and caste system.

Democracy warrants this practice should not be promoted.

In 2010, do you think India has values and ideals to strengthen its democracy?

It depends on education and on the conduct of those who lead political lives. Their example is very important to keep up our democratic values.