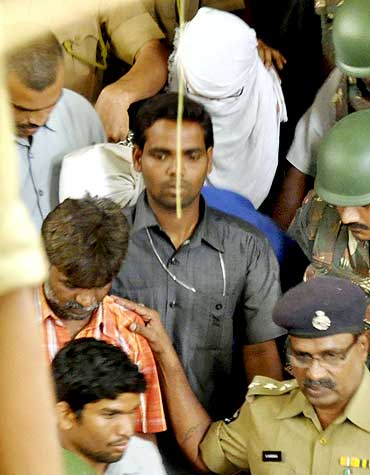 Image: The accused -- in hood -- being produced in court
Photographs: Snaps India

The long-pending investigations into the three-year-old Mecca Masjid blast case on Thursday moved forward with the Central Bureau of Investigation producing two suspects RSS pracharak Devender Gupta and his accomplice Lokesh Sharma in a special CBI court in Hyderabad.

14th additional Chief Metropolitan Magistrate remanded the two to the judicial custody till June 30. A CBI team brought the two from Ajmer jail on a prisoner transit warrant after the CBI submitted a memo to Hyderabad court that Devender Gupta, Lokesh Sharma and two other absconders were wanted in connection with the Mecca Masjid blast.

The Nampally criminal court complex was turned into a fortress by deploying a large number of policemen inside and outside the complex. All the gates were sealed and armed policemen were also deployed on the vantage points as part of the strict security arrangements for the suspects. 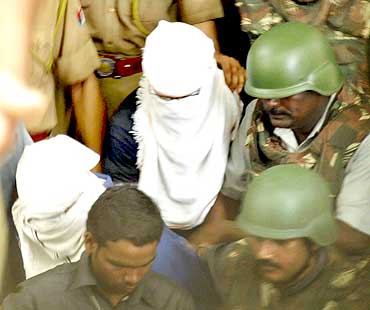 Image: Another picture from the court in Hyderabad
Photographs: Snaps India

The CBI had sought the assistance of the local police to provide security to the duo in view of the serious threat to their lives.

The CBI was scheduled to bring Devender Gupta and Lokesh Sharma on Monday but security concerns during transit caused the delay.

Devender Gupta and Lokesh Sharma, prime accused in bomb blast in Ajmer Dargah were in Ajmer jail for the last one and a half months.

CBI sources said that they will seek the custody of Gupta and Sharma to question them about their role in the bomb blast in Mecca Masjid on May 18, 2007. 15 people were killed in the blast during Friday congregation and subsequent police firing.

CBI says that it was on the look out for two more suspects Sandeep Dange and Ramachandra Kalasangar alias Ramji.