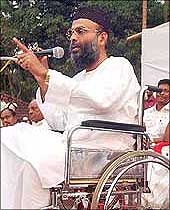 The Bengaluru police say they have enough proof about the involvement of People's Democratic Party leader Abdul Nasser Madani in planning the serial blasts in Bengaluru that claimed two lives on July 25, 2008.

According to the charge-sheet filed by the city police, Madani attended a crucial meeting along with terror suspect T Nasir in Coorg, 250 kms from Bengaluru, to plan the serial blasts.

The chargesheet further states that Nasir, who was arrested near the Bangladesh border, was the mastermind behind the blast, and he was helped by Madani.

The police have registered nine cases in connection to the blasts and ten terror suspects have been arrested.

According to the charge-sheet, the controversial PDP leader from Kerala had traveled to Madapur in Coorg, where Nasir was working at a ginger plantation. The chargsheet alleges that Madani assured Nasir of all possible help in carrying out the blasts.

Nasir met Madani again after the blasts, says the charge-sheet. Nasir had arranged for 2,500 riyals for the terror attack, indicating that the funding might have come from Saudi Arabia, according to the charge-sheet.

The police suspect that Abdul Sattar, another prime suspect in the Bengaluru blasts, arranged for the funding.

Madani has been booked for waging war against the state and concealing information. But sources in the city police say that the non-bailable warrant against him is yet to be executed.

"We are waiting for the right moment since we don't want to trigger communal tensions during his arrest. But Madani's arrest is certain," added sources in the police.

PDP leader Madani named as an accused in Bengaluru blasts