An interview with Lt Gen D B Shekatkar (retd) 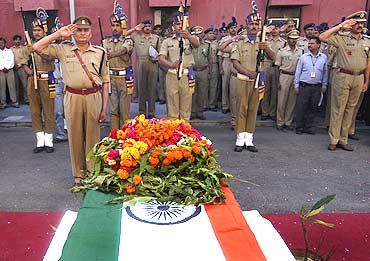 Image: CRPF personnel pay homage to a colleague killed in a Maoist attack in Chhattisgarh on April 6, 2010.
Photographs: Pawan Kumar/Reuters
The government faces its gravest internal security problem in recent times with the Maoists or Naxalites executing a series of brazen attacks against security personnel and civilians in the last two months.

The incidents have given fresh impetus to the debate on whether the Indian Army should be deployed in countering the Maoist threat.

Lieutenant General D B Shekatkar, PVSM, AVSM, VSM (high military service awards), a distinguished soldier and commander with a vast experience in combating insurgency in Jammu and Kashmir and the Northeast, feels the deployment of the army in combating the Maoists would be a wrong step.

However, the retired soldier with four decades of military service, says the army could help security forces with intelligence and training. In a detailed conversation he told rediff.com's Archana Masih that India cannot look at American or Israeli methods because the Americans are not fighting on their own land and hence have no danger of killing their own people. Rather, India should strengthen its own security forces and state mechanisms to contain the Maoists.

The last two months have seen a spate of Maoist attacks against security forces and civilians. What do you think has led to these increased attacks?

Around the world if any revolutionary movement wants its writ to run it must conduct certain operations with such ruthlessness that people get scared.

Four years back the Naxals looted the armoury in the Koraput district of Orissa. They took 800 weapons, put them in a truck in broad daylight and nothing happened to them. Unless they create some spectacular event people don't take cognisance of them.

So they will select targets that will give them publicity and prominence. Publicity is the oxygen of terrorism. Publicity is oxygen for Maoists also. Publicity puts fear in the minds of innocent people. The tribal feels if 76 CRPF (Central Reserve Police Force) personnel could be killed where do we go? So willy-nilly they start obeying the so-called diktat of the Naxalites.

When one action is successful it provides encouragement for another group operating somewhere else. It becomes a motivating factor. Therefore, their activities have increased and will continue to increase.

'The CRPF is not an officer-led organisation' 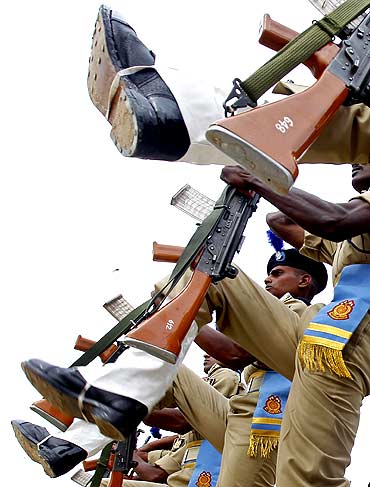 Image: CRPF personnel at a passing out parade in Humhama near Srinagar.
Photographs: Fayaz Kabli/Reuters
Going by recent Maoist attacks, the government seems to be ineffective in tackling or containing them.

Sending a few battalions of CRPF is no answer.

In this back and forth between Centre and state, who is getting strengthened? The Naxalites.

80 per cent people in those areas are fed up. They want water, roads, education, but since at the national and state level we have proved ourselves to be incompetent to fulfill their basic needs they are frustrated. So the Maoists tell them, you help us and we'll get you all this.

Wherever revolutionaries have come to power they have not been able to solve the problems of the people -- in Vietnam, China -- they bluff and their bluff works.

How can the CRPF play a better role in countering the Maoists? What should it do to become a frontline force in this particular situation?

People say send more CRPF battalions. The CRPF should be given time of about six months under proper leadership and training -- they should know the terrain, local language, philosophy, respect the customs and tradition because nothing hurts the tribal more than if you abuse his customs and rituals.

If you don't know his language, how will you communicate with him, how will he give you information?

The CRPF, I dare say, is not an officer-led organisation. Like in the army, young officers -- lieutenants, captains, majors are always in the front, they lead from the front, they are with the troops.

In the CRPF some percentage of IPS officers go, but they are passing time, they are waiting for the tenure to end so that they can go back to the state.

The ground level leadership is fairly senior in age, how do you expect them to go and stay in the jungles for 5, 7 days. It is easy to say we will send more troops, we'll fly them etc -- it is all bluffing the system. 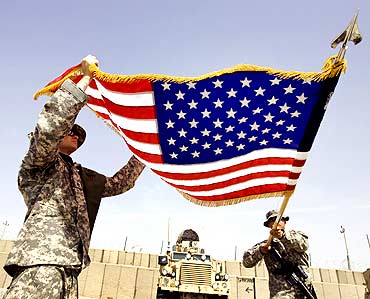 Image: US soldiers in Kandahar, Afghanistan.
Photographs: Shamil Zhumatov/Reuters
Each time there is a fresh attack there is a debate on whether the army should be deployed against the Maoists.

The philosophy of the Indian armed forces is the use of minimum force. You do not use force against your own people. If you are compelled, you use only required force, not great force.

In the last 200 years Americans have not fought a war on their own land. They have been fighting all over the world except on the land of the United States. When they fight outside, they fight for the so-called national interest so there's no danger of killing their own people.

It is easy to say use helicopters and it is very easy to apply the model of Israel and America in Afghanistan. Suppose if you land troops 80 kms deep in the jungles, after dropping them, how will you sustain them -- food, medicine etc?

You cannot use helicopters to fire when you can't recognise from 1,000 to 2,000 feet who is a Naxal and who is not?

You will be killing your own people because everyone living there is not a Naxalite.

What about the use of drones?

What is the density of forest in Afghanistan? It is a desert. But how do you take pictures in a dense forest? People who want these drones will paint a rosy picture, but I know as we have operated this in the army -- we know the limitations of the equipment, how do you identify the Maoists?

What if you mistake an assembly of innocent people as Maoists, then we will be doing what the Americans are doing -- marriage parties, school children are getting killed -- would we like to do the same thing in India?

You kill 10 hardcore Maoists, not many people will cry for them. You kill one innocent person and you have created 10 more Naxalites. Take it from me, it will multiply by 10.

It is for this reason that when lakhs and lakhs have been killed in Afghanistan and Iraq there has been no indication that the numbers of Taliban and Al Qaeda is going down. 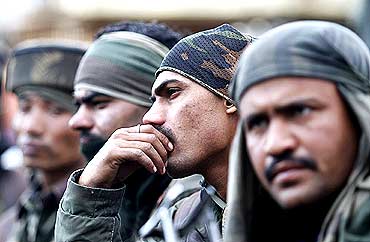 Image: Indian soldiers rest during a gun battle with militants in Dadsar village near Srinagar.
Photographs: Fayaz Kabli/Reuters
The defence minister has not completely ruled out the use of the army against the Maoists. What role can the armed forces play?

The army will do the same thing that the CRPF is doing. It will go in, dominate, take over the area and carry out ops. The army is certainly better equipped, organised, motivated, better trained and has better leadership.

But where will you bring the army from? Our army is already heavily committed on the borders. Almost 2/3 of the Indian Army is committed in border management in the Northeast, in Kashmir. Troops also require relief, leave, have to retrain themselves.

My reading is there seems to be a grand design somewhere in the world --- maybe Pakistan, China -- to shift the focus of the Indian Army from the border areas into the interiors, force the government to deploy the army into this part which will create a vacuum on the border.

Who will fill in the vacuum? The people waiting across the border who want to infiltrate.

While we have been able to manage the Northeast and Kashmir, brought it back to a semblance of normalcy, things are moving slowly, it's taking time -- so there seems to be a grand design -- to shift the focus of the government and armed forces into these states.

If it were to happen, how many army troops would be needed to counter the Maoists in these states?

In case the army is deployed, I hope it doesn't happen, it will be the worse thing to happen. It will go against all the national interest of India and this is what probably some foreign powers want.

It will digress the focus, attention, money and then the army will be accused of fighting its own people.

Recently the Canada visa controversy -- they (the Canadians) don't know what they are talking about, that is all lies -- but it is the perception of the international community.

Tomorrow you start operating in the Naxalite area, they'll say their own army is controlling this area. So it becomes a Catch-22 situation.

When the army goes into an area, it should work like an army is supposed to. You can't expect them to stand like policemen. If the army doesn't function like it is supposed to and tomorrow you send them back to the border they will be like sitting ducks.

So the deployment of the army in combating Naxalites will be a wrong step.