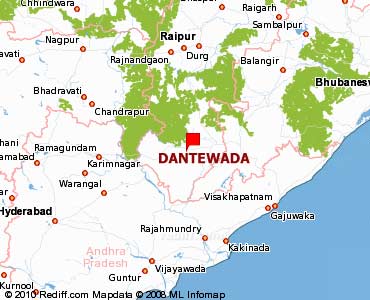 In the deadliest attack on security forces, Maoists trapped and gunned down 75 security personnel during Operation Green Hunt, an offensive against the Left-wing extremists, on Tuesday morning in the thick forests of Mukrana in Dantewada district of Chattisgarh.

The incident took place between 6 am and 7 am, when nearly 80 personnel from the Central Reserve Police Force and the state police were returning after opening a road for the troops, to begin an operation against Maoists. While 74 of those killed were CRPF personnel, including a deputy and an assistant commandant, one was a head constable of the district police.

Dantewada Superintendent of Police Amresh Mishra said the Maoists first blew up a vehicle carrying the CRPF personnel near Chintalnar-Tarmetla village in the district.

Immediately after the blast, the CRPF personnel and a few police personnel tried to take cover when they came under heavy fire from hundreds of Maoists, well entrenched on the adjacent hillock.

The CRPF team had been camping in the interiors of Tarmetla jungles for the last three days as part of a combing operation and area domination exercise, Mishra said.

The attack shook the Centre and Prime Minister Manmohan Singh called up Home Minister P Chidambaram to make an assessment of the situation.

Both of them expressed shock over the attack and grief over the loss of lives. While the prime minister called it a 'horrific' incident, Chidambaram said the attack showed the brutality and savagery of the Maoists. Rattled by the 'very high' casualty, Chidambaram said something must have gone 'drastically wrong' in the joint operation as the personnel seemed to have walked into a trap.

Bodies of the 75 personnel have been recovered from the site of the attack, suspected to have been carried out by nearly 1,000 Maoists, Inspector General R K Vij said. The Maoists had planted improvised explosive devices, which blew up an anti-mine vehicle, killing the driver.

This was followed by heavy exchange of fire between the remaining CRPF personnel and the Maoists.

The injured CRPF men have been evacuated for treatment from the forest area, he said.

The bodies of the slain CRPF personnel will be brought to Jagdalpur by Indian Air Force helicopters from where they will be flown to Delhi in the IAF's AN-32 planes.

CRPF Director General Vikram Srivastava, who rushed from New Delhi to the site of the attack, said, "The CRPF men were in the forests for operational duty when the Naxals attacked. It is very tragic and sad."

Chief Minister Raman Singh called a meeting of top officials to discuss the strategy in the aftermath of the dastardly attack. "This incident showed the real face of Maoists," he said.

CRPF Special Director General Vijay Raman, who is also the commander of the Anti-Naxal Task Force, is on his way to the forest area. Additional reinforcements have already been sent and search operations are on in the area.

The operation to rescue injured jawans was over and the bodies were being airlifted.

On February 15, 24 personnel of the Eastern Frontier Rifles were killed in a Maoist attack on their camp in West Bengal's West Midnapore district.

In earlier major attacks, Maoists killed 38 greyhound commandos of the Andhra Pradesh police in a reservoir in June 2008 in Orissa, while 16 policemen were killed in the jungles of Gadchiroli in Maharashtra in last June.