Let these men not remain numbers Image: The hospital ward where the injured CRPF troopers undergo treatment. Their names are written on the white board
Photographs: Seema Pant Archana Masih
Young men who are injured or martyred in the line of duty have been reduced to dry statistics. Archana Masih reports on injured security personnel recovering from deadly Naxalite attacks and looks at the lives behind those numbers.

They are the faces behind the numbers. Men whose names are written on the hospital board, all with the same injury: Gun shot wounds.

Biswanath Besan, Anil Kumar, Shafiqul Islam, Ajay Kumar, Parmanand are the names behind the numbers. Statistics that appear in news reports giving grim details of injured or dead security forces personnel; numbers that get bypassed, overlooked, ignored as blind spots in a bouquet of news items -- be it in a battle with infiltrators in the Kashmir valley or with Naxalites in Chhattisgarh.

These men are troopers from the 39 battalion of the Central Reserve Police Force who were injured in a deadly attack while 27 others from their battalion were killed by the Naxalites or Maoists in an evening ambush in Narayanpur, Chhattisgarh on June 29. They are recovering in a hospital in Raipur after undergoing several surgeries, one fortunately, narrowly missed an amputation of the arm.

Anil Kumar, a farmer's son from a village in Bihar's Bhojpur district, lay in bed with a splinter injury in his right thigh and had developed an abscess. The evening we saw him two weeks ago, he was suffering with stomach pain and the nurse had just given him another pain killer.

No one from Anil's family had been come to see him till then and he was hoping his brother would be visit him soon. "Life and death is in God's hands. I just want to be back on my feet so that I can join my unit," says Kumar who joined the CRPF in 2004.

Dr Pankaj Dhabalia, the head of orthopaedics at the hospital, says the men will regain their physical fitness, but will need two to three surgeries and prolonged treatment. While three troopers are likely to be discharged soon and will need regular physiotherapy once they go back, Shafiqullah from Assam and Biswanath from Orissa require further treatment at the hospital.

"In a gun shot injury or war injury, the bone gets fragmented. If you lose a big fragment, we have to see how to increase the length of the leg, how to dry the wound, how to prevent amputation. These are poly-trauma cases involving multiple organs with bone and skin loss," explains Dr Dhabalia who has seen between 200 and 300 Naxalite-inflicted injuries at the hospital.

The injured do not receive any compensation Image: Injured personnel being treated in Jagdalpur, Chhattisgarh
Photographs: Reuters
As the men recover in their wards, they are guarded by CRPF personnel in mufti adept at keeping the media at bay. Though the hospital authorities give Rediff.com permission to see the injured who are making a good recovery, the CRPF personnel do not.

Irked by the media criticism about field strategy and the poor living conditions of trropers at the camps in Chhattisgarh, the CRPF is apparently discouraging of the media interacting with its personnel in the theatre of battle.

"All five are doing well," says V K Dua, Special Sector Inspector General, one of two Central Reserve Police Force IGs stationed in Raipur. "Their relatives have also come and met them. In one case we were initially told that his hand may be amputated but fortunately it did not have to be. He is recovering well."

The staff at the hospital inform us that a CRPF doctor visits the men regularly. Officers from the CRPF and government have also been in regular touch about the trooper's recovery.

CRPF troopers killed in anti-Naxalite operations in Chhattisgarh have received up to Rs 35 lakhs (Rs 3.5 million) as compensation, of which Rs 10 lakhs (Rs 1 million) each has been provided by the state government. The injured do not receive any compensation.

"If they are incapacitated we have a facility, it depends on the percentage of physical disability for which there are different schemes," says Inspector General Dua. "In case of operational injuries or any kind of incapacitation, we retain them to the extent possible by giving them light duties."

Of the seven injured survivors of the brutal Dantewada massacre on April 6 where Naxalites killed 75 CRPF troopers, one is still recovering at the All India Institute of Medical Sciences in New Delhi. He lost an eye and the doctors are trying to replace it.

"The main thing is that they survived," says Dua about the CRPF troopers injured in the April 6 attack. "As regards their injury -- in two cases -- we are awaiting the final outcome, the rest will be able to lead almost a normal life."

130 policemen have died battling Naxals in Chhattisgarh this year 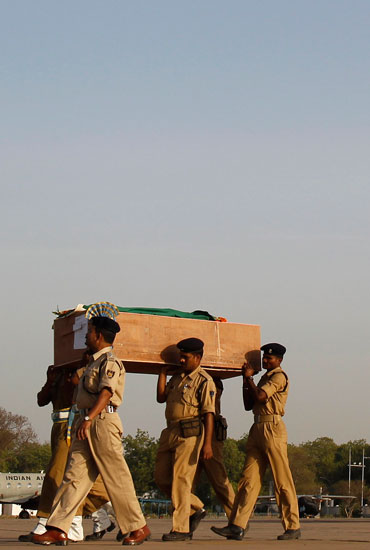 Image: CRPF men bear a coffin of a trooper slain in the Dantewada massacre
Photographs: Adnan Abidi/ Reuters
Once discharged, the CRPF troopers will need physiotherapy; they are also being trained to do it themselves.

"They would rather stay here and get treatment because in their villages there may not be good doctors," says a doctor at the hospital. "If he comes from Himachal (Pradesh), he prefers going to a Delhi hospital for follow up, a person from Andhra (Pradesh) prefers Hyderabad, they don't want to go to local doctors."

Also admitted to the hospital are two constables from the Chhattisgarh police recovering from Naxalite bullets. Siddharth was shot in the leg and has been in hospital for four months. David Toppo took a bullet in his face; with his tongue slit and jaw broken he lies in bed with plates and bandages and is unable to speak.

It will take further surgery before Toppo's jaw is healed. His father, a guard at a bank, is looking after his eldest son who joined the police two years ago.

Unlike the CRPF, no one stops us from seeing the Chhattisgarh policemen. David's father Eliezer and Constable Narsingnath Yadav explain the extent of his grievous injury. Had he not been airlifted to Raipur, David would not have survived, they say.

Doctors recall one injured personnel in the past, urging them not to inform his aged father about his condition. The policemen was in hospital for four months and finally went home walking -- no ordinary feat after a gunshot injury.

In a battle where the enemy is entrenched in the jungles, the security forces and the police have lost 130 men this year in Chhattisgarh. Many others have been badly injured in the line of duty. Many families have been destroyed; many dreams shattered.

The least we can do is move beyond the statistics and spare a thought for the lives behind those numbers.