The Peace Caravan rolls on 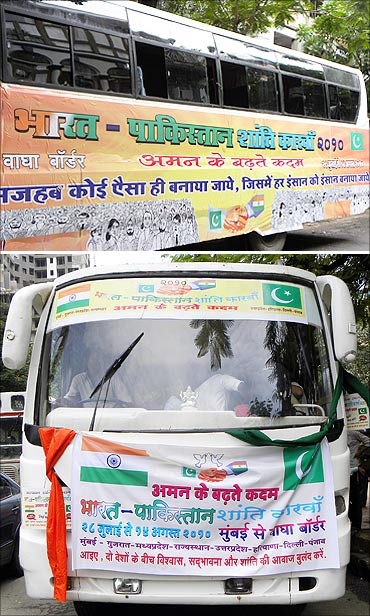 Common people in India and Pakistan will continue to strive for peace and friendship irrespective of what their political masters do. That was the mood at the India-Pakistan Peace Caravan that flagged off from Mumbai on July 28. The caravan will reach Atari border on August 14 where they will meet their counterparts at the Wagah border, reports Prasanna D Zore.

The recent India-Pakistan peace talks between India's foreign minister S M Krishna and his Pakistani counterpart Shah Mahmood Qureshi may have failed mid-July in Pakistan. Call it grandstanding, one-upmanship, whatever. But that has not dented the faith of common people across the border that they can succeed where their leaders have so diligently failed.

These people -- through various people-to-people contact programmes -- keep pushing governments of both the countries for less visa restrictions, free movement of people and goods across the borders, cutback in the huge defence budgets of the two nations that has helped spawn a military-industrial complex with entrenched vested interests, dismantling of their nuclear establishment and curbing of terror acts on both sides of the border.

One such initiative is the India-Pakistan Peace Caravan, flagged off on Wednesday from Mumbai's August Kranti Maidan by Maharashtra deputy chief minister Chhagan Bhujbal. 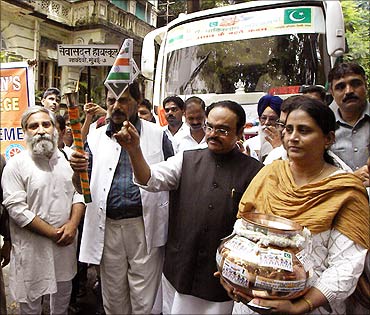 The Caravan is scheduled to wind its trail through different parts of Maharashtra, Gujarat, Rajasthan, Delhi, Haryana, and culminate on August 14 Pakistan's Independence Day -- at Attari, the frontier town in Indian side of Punjab where they will welcome their counterparts, who have set on a similar Caravan from Karachi today, on the Pakistan side of Punjab at the Wagah border.

Then, if allowed permission, the Indian delegates will cross into Pakistan to attend a convention in Lahore on August 15, India's Independence Day.

Two days before that, on August 13, Pakistani delegates, if they get visas, will attend noted journalist and former Rajya Sabha MP Kuldip Nayar's convention in Amritsar.

The volunteers of the India-Pakistan Peace Caravan, in a symbolic gesture to show that the two countries are not very different from each other, will mix the soil they are carrying from their respective countries.

But what concrete changes on ground, cynics may ask, can these people-to-people peace-friendship initiatives achieve? Apart from lighting candles, singing friendship songs at night vigils across the Atari-Wagah what else have they achieved? 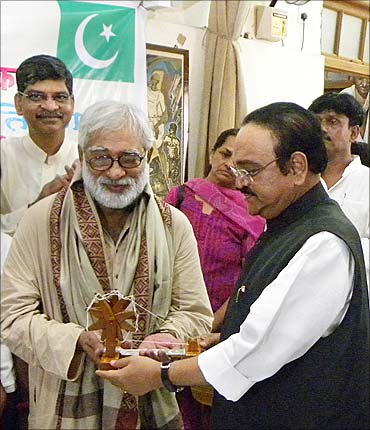 Karamat Ali, a labour union leader from Karachi, who has come to meet his Indian friends despite visa hassles, and who will soon fly to Pakistan tomorrow to join the Caravan in Pakistan, begs to differ.

"The people who join such peace movements commit themselves to their goals. Then wherever they go, they create an awareness when they talk to other people (about the futility of animosity between the two neighbours)," he says.

"It is the next generation that I have my hope in. When the young join they inspire others to join them."

He feels that the Indian and Pakistani people belong to the same stock. So, for him, it makes sense if governments of both the countries strive for peace with each other.

"Else we will never be able to eradicate poverty and backwardness from our countries; we will spend all our resources in fighting wars," he pleads.

He says that there is only a small minority in both the countries that benefit from keeping the flame of enmity alive.

"90 per cent of the people of India and Pakistan want peace," he says. Sandeep Pandey, the convener of the Peace Caravan in India, echoes Ali.

"Who benefits from continuous enmity between our two countries?" asks Pandey.

"It is the military-industrial establishment in India and Pakistan," adds the bearded former IIT-Kanpur Professor, who studied doctorate in mechanical engineering from the University of California, Berkeley but has since then committed himself to the cause of peace between the two South Asian countries.

"Do you really believe the politicians will ever solve the tangle? Ordinary people like you and I will have to take that mantle on ourselves," he says, without any frustration when asked what is achieved by such peace caravans.

He is confident that their charter of points will get people's support as the Peace Caravan winds its way across the seven states and help create awareness about the dangers that two nuclear capable nations are exposing their people to.

An India-Pakistan Peace Caravan to nowhere? 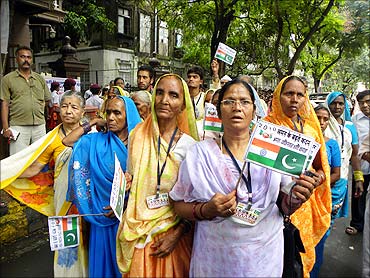 And what are the requests of the India-Pakistan Peace Caravan members who will converge on the Atari-Wagah border on the night of August 14?

Well-argued points, but will it be the same story? Is the Caravan heading no-where?

Pandey is laconic. "Let cynics do what they do best and we will continue to create an awareness and making such requests till better sense prevails amongst the powers that control the destiny of close to 1.4 billion people."