Moving beyond the Indo-Pak 'peace talks' 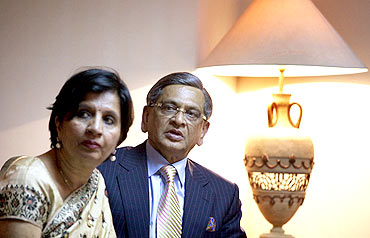 I am always amused at the great expectations that some Indians harbor about India-Pakistan palavers, contrary to sense and prior experience. I suspect nothing will ever come of any Indo-Pak talks, because the dominant Pakistani ethos, indeed the very raison d'etre of that State's existence, is based on being not-India and anti-India.

In particular, Pakistan is a State owned by an army, and the army would have no reason to exist if peace were, by some miracle, to break out with India. Survival instinct alone, therefore, suggests that the Pakistani army could not possibly afford peace. After all, the continuous state of covert war sustains a very comfortable living for the generals -- a story in the New York Times on July 19 talked about how parts of Islamabad look like a tidy, affluent Los Angeles suburb.

However, I am overwhelmed by d j vu, because I could repeat verbatim what I wrote in June 2001, in a column titled 'Because it's their nature, their custom: Why the Indo-Pak summit is doomed', about the much-ballyhooed 2001 talks with General Musharraf. I offered several analogies, including one with two sets of Polynesian islanders with widely differing visions of what 'peace' might be -- absolutely appropriate in the India-Pakistan context.

I concluded with the following, and in hindsight I was wrong in assuming that India could drive Pakistan to bankruptcy with an arms race, much as the Americans had done to the Soviets:

It is clear that Pakistan -- or, to be precise, their ruling military establishment -- wants, or needs, war. We can oblige: India can continue to bear the cost of war better than a much smaller, economically stagnant Pakistan which is liable to collapse under its own internal contradictions and runaway religious terrorism.

Of course, this was before 9/11, and I did not anticipate then that the Pakistanis would get the Americans (and the Chinese) to underwrite their war against India, and that the Indian government would be so unwilling to or incapable of deterring Pakistan by imposing costs on misadventures. Instead, Pakistan is convinced that India does not have the guts to stand up to them.

Pakistanis are justified in believing this: for all practical purposes, the Mumbai attack in 2008, 26/11,  has been forgotten, and this so-called 'peace process' is proceeding from the Indian side as though the humiliation of that frontal attack on India's financial nerve-center never happened. The small matter of 180 Indians being massacred, and India's inept response to the crisis, both broadcast live around the globe, are forgotten.

Indeed, the name of the game today in India is finger-pointing: mandarins are running around trying to find a scapegoat to blame for the 'failure' of the talks. They have found a good candidate in Home Secretary G K Pillai, who is now the fall guy for having dared to mention some unmentionables.

A news item suggests that the prime minister is unhappy with Pillai for having aired David Coleman Headley's confessions about the involvement of the Inter Services Intelligence and the Lashkar e Tayiba in the Mumbai invasion. It seems the prime minister would have preferred it if this minor detail were swept under the carpet! What were the talks about, if they were to ignore the Pakistani establishment's culpability in cross-border terrorism?

China ignores US noise over N-reactors for Pakistan 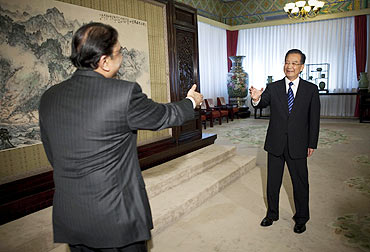 Where do the 'concessions' end? Wasn't it enough that the Government of India quietly handed over 25 Pakistani terrorists -- with no reciprocity -- as a 'goodwill gesture' to apparently smooth the way for the talks? And why didn't the ever-vigilant English Language Media utter a word about this rather strange, and servile, way of engaging a foe?

Several distinct but related events have shown that India's alleged Pakistan policy is either non-existent or self-defeating. First, there is the all-but-complete transfer of two 635-megawatt Chinese nuclear reactors to Pakistan, which will allow the latter to build 24 more nuclear bombs every year in addition to their existing stockpile of 70-90, already bigger than India's.

Second, recent violence in Jammu and Kashmir is a direct result of the decision by the GoI to withdraw 30,000 troops a few months ago. Third, the apparent willingness by Afghan President Karzai to cooperate with the intensely anti-India Haqqani network implies the total failure of India's efforts to be a stakeholder in that nation.

China has simply ignored the pro-forma noises that the US made at the Nuclear Suppliers' Group regarding likely weapons proliferation because of the new reactors being transferred to Pakistan. Selig Harrison, writing in the Boston Globe, pointed out how proliferation is part of Pakistani national policy. Despite this, and despite all the GoI's exertions to ram the so-called 'nuclear deal' down India's throat, America has no qualms about the Pakistani stockpile.

Thus the dubious nuclear deal has had the effect of strengthening Pakistan's hand, while constraining India's own puny efforts at building a deterrent against China, almost exactly as opponents of the deal said, while the GoI proceeded with it in a haze of lies and subterfuge.

ISI believes it has India 'on the run' 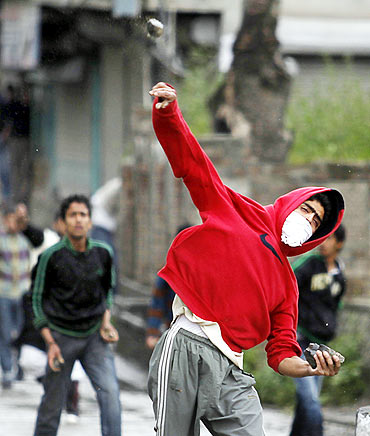 It appears the sudden upsurge of violence in Jammu and Kashmir is almost certainly a calibrated and calculated ratcheting up of tension by the ISI. Intercepted phone calls suggest that the ISI and pals like the LeT are paying 'rage-boys' to indulge in stone-throwing and other violence, expecting to induce over-reaction by the stressed-out paramilitary troops and police. This, then, can lead to manufactured 'martyrs'.

The ISI has reason to believe it is on a winning track. Successive statements by the prime minister in Havana, Sharm-al-Sheikh and Thimphu have all implied that, succumbing to American pressure, India is willing to cede Kashmir to Pakistan, the only issue being how to market such a climb-down to the Indian public.

The coded talk of 'creative solutions' and 'trust deficit' have been interpreted by them as a 'deficit of will', and the likelihood that they can make J&K simply too expensive for India to hang on to. The proximate cause is the withdrawal of 30,000 troops. To the ISI, this spells "we have the Indians on the run". So why, they ask reasonably, should they negotiate, when they are winning?

Intriguingly, this is almost exactly the same feeling that the ISI has about the Obama administration after its disastrous declaration of a timetable for withdrawal from Afghanistan. They, and their proxy the Taliban, feel that all they have to do is to wait things out -- the Americans have no will to fight, or stay on. Apparently President Karzai implicitly believes this -- witness his alleged overtures to the Taliban and the Haqqani Network.

Karzai, Taliban and Haqqanis are all Pashtuns. Pashtuns account for only about 40 per cent of the Afghan population, along with large groups of Tajiks, Uzbeks, and Hazaras. India has traditionally had good relationships with the Pashtuns but even better ties to the Tajiks, who, under the charismatic military genius Ahmed Shah Massoud of the Northern Alliance, held off the Soviets and then the Taliban.

Now all the blood and treasure -- hundreds of millions of dollars -- that India has poured into reconstruction efforts in Afghanistan seem to be in jeopardy because Pakistanis have convinced Americans and others that India has no business whatsoever in Afghanistan. India was excluded from previous talks about that nation, and now seems to be grudgingly included.

The irony is that the Pashtun issue is one of Pakistan's key weaknesses -- the Durand Line arbitrarily divides Pashtun territory into Afghanistan and Pakistan. Pashtuns themselves have never recognised it, and given a chance, would create an independent Pashtunistan on both sides of the line. Pashtun parts of Afghanistan, and the erstwhile North-West Frontier Province and parts of the Federally Administered Tribal Areas of Pakistan would be its component parts.

This, of course, would be a disaster for Pakistan, as it would induce restive and oppressed Baluchis and Sindhis to secede as well, leaving just a rump Pakistani Punjab, which would be too small to cause much damage to anybody but itself.

A weak, balkanised Pakistan is in India's interests 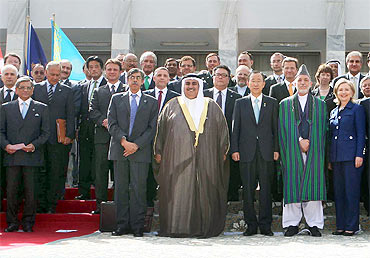 In fact, some analysts suggest just such a balkanisation to solve the Pakistan problem. (There are clearly potential problems for India, too -- perhaps there will be pressure to create a separate Kashmiri State; similarly Iran may end up losing its Baluch province of Sistan/Baluchistan to an independent Baloch State).

Somehow, the enterprising ISI has turned this weakness into a strength, by hijacking the Pashtun elements into their proxy Taliban. Similarly, the ISI, which faced the wrath of America after 9/11 with its peremptory warning to President Musharraf to behave or else, has turned it into a $25 billion bonanza. Ironically, the Americans are in effect subsidising the Pakistani purchase of Chinese reactors!

Instead of containing Pakistan with a pincer movement with one front in Afghanistan, India is now in the unenviable position of confronting the ISI's 'strategic depth', which it has always craved. Uncertain about its goals and ever-eager to appease, India has allowed a failing State one-seventh its size to checkmate it. Lack of strategic intent has led to dismal failure yet again.

There is only one small silver lining in this cloud, and it is based purely on geography and demography. That silver lining is that the ISI may have been too clever for its own good, and that its 'victory' in Afghanistan may well be Pyrrhic, if it results in the unravelling of the country. There are those in India who say that a 'stable, prosperous' Pakistan is in India's best interests. Hardly. On the contrary, a weak, balkanised Pakistan is.

Pakistan has made a career out of running with the hares and hunting with the hounds. It was obvious as long ago as the siege of Kunduz in 2001 and the ensuing 'Airlift of Evil' that the so-called Taliban officers are serving or retired Pakistani Army and ISI brigadiers and colonels wearing baggy pants and beards and turbans. The ISI has had a great run with the fiction that the Taliban is distinct from itself.

With luck, this may be coming to an end. Former US Ambassador to India Robert Blackwill endorsed a formulation of a de-facto partition of Afghanistan, with the northern portion (including Kabul) to be under an American-NATO umbrella, and the southern, Pashtun, portion, to be left to the tender mercies of the Taliban/ISI. This is surely a trial balloon from the US Administration.

In effect, this would mean the old Northern Alliance would be re-constituted, with the US/NATO supporting it and keeping the Taliban at bay, as it was before 9/11, the only difference being that 10 years have passed and $300 billion has been spent, a fair bit of which has spirited away by the ISI and friends. And Massoud has been assassinated.

If this is the final end game in Afghanistan, India had better be prepared to play an active role. Otherwise, in the new Great Game being played on the fringes of Indian territory, it will end up just a spectator. India should be looking to parlay its long tradition of relations with Afghanistan to establish strong commercial linkages, especially now that it turns out the country is chock-full of minerals.

The Indo-Pakistan 'peace process' is merely a ritualistic sideshow, full of sound and fury, signifying nothing. The real strategic imperative is a plan for India in a post-Pakistan scenario, especially to prevent China and America from dividing up the Af-Pak region into their spheres of influence. With some luck, Pakistan may yet implode without any help from India. India should look beyond its obsession with Pakistanis strutting about, and pursue its national interests.