Basu, a record setter in many ways 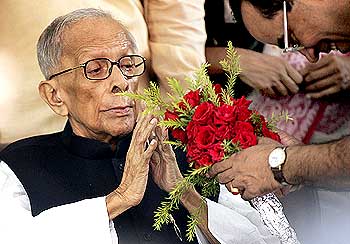 As a young barrister who embraced Communism, Jyoti Basu showed remarkable pragmatism in a dogmatic party that prevented him from becoming prime minister at the height of coalition politics.

Ninety-five-year-old Basu, called to Middle Temple, London, forsook the barrister's gown to emerge as a charismatic leader, who strode the Indian political scene for over five decades like a colossus, and was respected across the spectrum.

A political legend, Basu became the longest serving chief minister of West Bengal for 23 years from 1977 at the head of the Communist Party of India (Marxist)-headed Left Front government which in his last years in power showed it was ready to woo foreign investment and some market-oriented policies.

When coalition politics offered him the chance to become prime minister of the United Front government in 1996, his party the CPI(M) declined to took over power at the Centre.

He had described his party's decision of not accepting the prime ministership as a 'historic blunder', which was termed by his party, the CPI(M) as his 'personal view'.

An astute politician, able administrator, reformist and a record setter in many respects, he had the distinction of holding membership of the West Bengal assembly uninterruptedly since 1946, save a break in 1972.

The man who humbled Congress 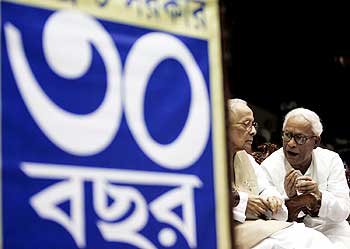 Steering the Left Front government, a coalition of Left parties, barring Socialist Unity Centre of India, since 1977, Basu put into practice the concept of decentralisation of power right down to the block level -- by introducing Panchayati Raj and effectively implementing land reforms.

Even late premier Rajiv Gandhi had lauded Basu's role and convened a National Conference of Panchayati Raj in 1989.

Giving the state a new industrial policy, Basu who earned the favour of late chief minister Bidhan Chandra Roy as early as in the late 50s for being 'effectively vocal' as Leader of the Opposition, raised his voice for restructuring Centre-state relations that finally led to formation of the Sarkaria Commission in the late 80s.

It was his political foresight that brought together all like-minded parties on a single platform to provide a third alternative to the Congress and the Bharatiya Janata Party in the National Front-Left Front combine in the late 1980s and 1990s.

Basu was born into an upper middle-class Bengali family in Kolkata in 1914. His father Nishikanta Basu, a doctor, hailed from the village of Barodi in Narayangunj district now in Bangladesh.

A chief minister for 23 years 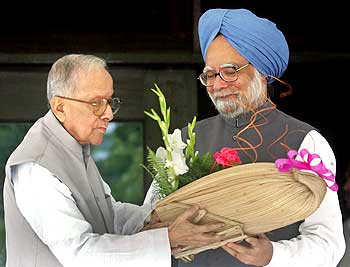 Basu went underground when the Communist Party was banned in 1948 and was jailed several times during the Congress rule in West Bengal. He was imprisoned in 1953 for spearheading a movement against a hike in tram fare.

Basu had wrested the Baranagore seat from then Education Minister Roy Harendranath Chowdhury in 1952.

Though 28 communist candidates were elected to the assembly that year, the then speaker refused to accord Basu the status of the leader of the opposition.

The recognition finally came in 1957, when Basu was re-elected from Baranagore constituency, the seat which he retained till 1972, when he suffered the only electoral defeat in his political career.

He emerged as an influential member of the CPI(M) after the 1964 split in the Communist Party of India over sharp ideological difference over the Sino-Indian war in 1962.

Basu, in a letter entitled 'Save the party from revisionism and dogmatic extremists' written from jail in 1963, a year before the CPI(M) was formed, was initially against its creation saying, "We have to continue our ideological struggle against Dange's politics of revisionism. It will not be right to split the party."

The contents of Basu's letter was revealed in a book 'Communist movement in Bengal, Documents and Related Facts' published by the CPI(M).

In 1967 and 1969, Basu was deputy chief minister of the United Front governments in West Bengal.

Eight years later, he became chief minister in 1977 and remained in the post for 23 without break.

In the 1980s, he played a key role in convening a meeting of non-Congress chief ministers in Kolkata to raise their voice against the "step-motherly attitude" of the Congress government at the Centre in close liaison with late N T Rama Rao of Andhra Pradesh and late Ramakrishna Hegde of Karnataka. 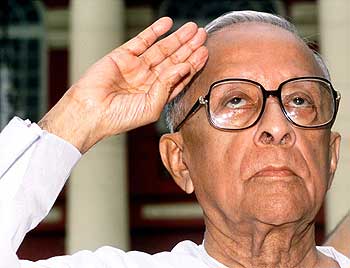 Basu's political acumen was revealed again when he succeeded in his efforts in late 1985 to convince late premier Rajiv Gandhi of the utility of forming a hill council to restore peace in strife-torn Darjeeling where the GNLF under Subhas Ghising had waged a violent agitation for a separate state.

Initially opposed to economic liberalisation policy of the P V Narasimha Rao government, Basu initiated formation of an "alternative" policy to woo investors. He also went abroad to attract foreign investments in the face of strong criticism by his own party comrades.

Known for his pragmatic approach to political and economic issues, Basu was the main advocate for the initial participation of the Tatas in the Haldia Petrochemical Complex, which was among the first major industrial initiatives during the Left Front rule.

Acknowledging that socialism was not possible, Basu said, "We want capital, both foreign and domestic. After all we are working in a capitalist system. Socialism is not possible now."

Basu resigned from chief ministership in 2000 for health reasons. The 18th Congress of the CPI(M), held in Delhi in 2005, re-elected Basu to its polit bureau although he had pleaded to be allowed to retire from it. 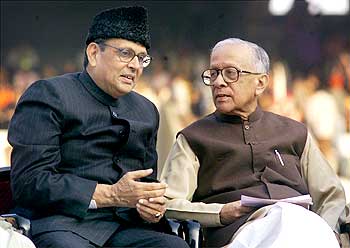 On September 13, 2006, Basu entreated the CPI(M) to allow his retirement due to his age but was turned down.

General Secretary Prakash Karat said the party wanted Basu to continue until its 2008 Congress, at which point it would reconsider.

At the party's 19th Congress in April 2008, Basu was not included in the polit bureau, although he remained a member of the central committee, and was designated as a special invitee to the Polit Bureau.

The CPI(M) may have made anti-Congressism as its main political plank for much of its existence, Basu himself was considered close to Congress leaders like Indira Gandhi for whom he had high regards and Rajiv Gandhi.

Basu was one of the CPI(M) stalwarts to prod his party to extend outside support to a Congress-led coalition government at the Centre after the 2004 Lok Sabha polls to keep BJP at bay.

This was a far cry for the CPI(M) from the Emergency days of mid-1970s when it had ridiculed its present partner CPI for aligning with the Congress, comparing the CPI to a calf along with the 'cow', the then election symbol of Congress party.