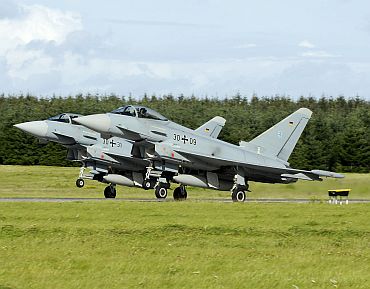 On February 15, two Eurofighter Typhoon fighters of the Luftwaffe -- the German Air Force -- took off from the Laage Air Base in Germany on probably the most important mission the plane has flown.

After touching down in Bangalore on February 17, they are preparing for flight trials by Indian Air Force pilots, which begin on February 22. The outcome of those trials in Bangalore, Jaisalmer, and then Leh, will be crucial in determining whether 126 Typhoons, and possibly more later, will sport the roundels of the IAF.

The IAF has already tested four fighters in this six-aircraft, $11-billion contest to select a Medium Multi-role Combat Aircraft (MMRCA): the American F/A-18 Super Hornet and the F-16IN Super Viper; the French Rafale; and the Russian MiG-35. On the heels of the Eurofighter will come the last contender, Sweden's Gripen NG. ... 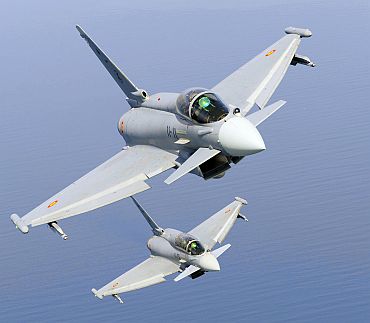 Image: Eurofighters in formation over the Andulucian coastline, Spain

After the flight trials are over, IAF sources tell Business Standard, the competition will narrow to three or four contenders; two fighters, they say, have already performed below par. Then, the commercial bids will be opened; Ministry of Defence (MoD) procedure mandates that the lowest bidder wins the contract.

Synchronised perfectly with the start of its flight trials, the Eurofighter Typhoon has transported a flight simulator to Defexpo 2010, running in Delhi from February 15-18.

In that simulator, over the past three days, key Indian decision-makers have personally experienced the aircraft. These include Defence Minister A K Antony; the IAF chief, Air Chief Marshall P V Naik; the pilot overseeing flight-testing, Air Commodore Rakesh Dhir; and a host of VIPs, including Anand Mahindra. 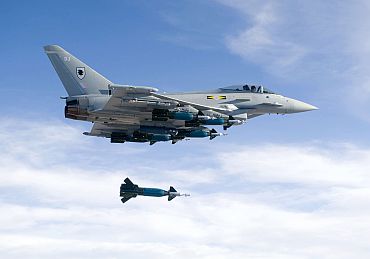 Eurofighter's next splash will be during Exercise Indradhanush, in October, when a group of Royal Air Force Typhoons fly into India, participating for the first time ever in the joint RAF-IAF exercise.

That is expected to grab media attention exactly at the moment when the MoD is finalising its decision on which fighter to buy. "The Eurofighter participation in the exercise is not part of a plan," Bernhard Gerwert, the boss of Eurofighter GmbH, told Business Standard.

"The Luftwaffe is sending the fighters for flight testing; the Typhoons in the exercise are from the RAF. But, this does reflect Eurofighter's pan-European nature." 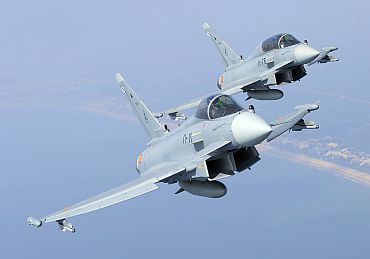 Eurofighter's careful public relations strategy reflects the skill with which it has handled its MMRCA campaign.

Unlike some of the contenders, which spent millions of dollars in promoting their fighters in India and participating in air shows for years, Eurofighter only launched its India campaign in 2008.

The Typhoon itself was first displayed in India last February, at the Aero India 2009 in Bangalore. Only French manufacturer, Dassault, which has offered the Rafale, has been more restrained. The Rafale has never been displayed in India. 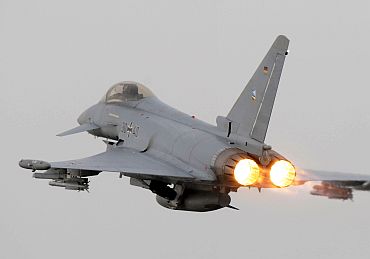 Eurofighter's campaign has also been enhanced by a growing list of sweeteners. Having earlier offered full "partnership" for India in the Typhoon programme, Defexpo 2010 has seen a ramping up of parent company, EADS' engineering centre in Bangalore.

Gerwert elaborates, "We are shifting Research and Development (R&D) out of Germany and into India. The Airbus Engineering Centre in Bangalore currently has 120 local engineers, who carry out civilian R&D for the airliner business. By 2012, this will have stepped up to 400 engineers for civilian R&D and 200 engineers working on military programmes."

Gerwert clarifies that this does involve the politically sensitive transfer of jobs to India. Each extra engineer will be a new hire.