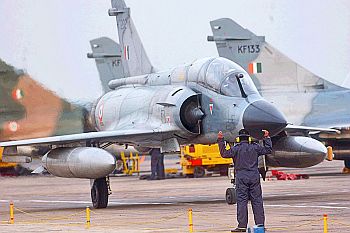 The winner's jackpot could soon become even bigger in what is already the world's most lucrative fighter aircraft tender: India's proposed purchase of 126 medium multi-role combat aircraft (MMRCA) for an estimated Rs 51,000 crore ($11 billion).

The reason is a breakdown in India's long negotiations with Dassault Aviation, the French aircraft manufacturer, for upgrading 51 Indian Air Force Mirage-2000 fighters.

According to senior IAF sources, Dassault has refused to reduce its quota of Rs 10,000 crore ($2.1 billion) for extending the service life of the IAF's Mirage-2000 fleet by fitting new radars and avionics. 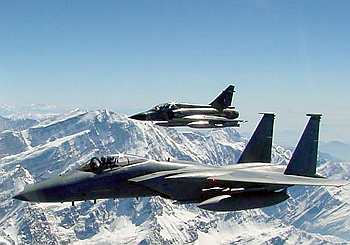 Image: An F-15 Eagle and a Mirage 2000 fly together over the Himalayas during a wargame
Photographs: http://www.af.mil
The Ministry of Defence (MoD) considers this price -- Rs 196 crore ($41 million) per aircraft -- unacceptably high, given that the airframes and engines will not be changed.

In comparison, each of the 126 brand-new, next-generation MMRCAs will cost some Rs 400 crore ($87 million) per aircraft. That includes the cost of technology transfers, as well as capital costs for setting up a manufacturing line in India. Once those costs are amortised, additional MMRCAs would be significantly cheaper.

But, the MoD is veering around to the view that the Mirage-2000 fleet should continue service in its current form.

Israeli are in the game 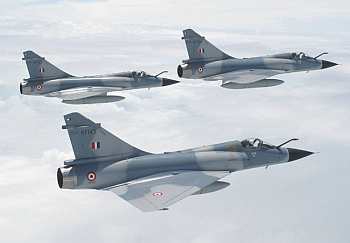 Image: Formation of three Mirage 2000s from Gwalior
Photographs: Indian Air Force
After six squadrons (126 aircraft) of MMRCAs have entered IAF service, an additional two squadrons of MMRCAs would be built to replace the 51 Mirage-2000 fighters. That amounts to a 40 per cent rise in the MMRCA's numbers.

Israeli aerospace companies have reportedly entered the fray, offering to upgrade the Mirage-2000 for half the price being quoted by Dassault. The MoD, however, is not inclined to accept that offer.

Price negotiations for the Mirage-2000 upgrade have travelled a rocky road over two years. Initially, Dassault quoted Rs 13,500 crore ($2.9 billion), which it brought down to the current level of Rs 10,000 crore ($2.1 billion) after the IAF diluted its upgrade requirements.

IAF now looking beyond the Mirage 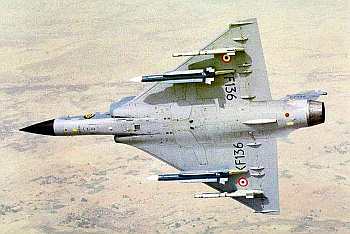 But the MoD believes Dassault's reduced bid only reflects the diluted requirements, rather than any flexibility on the latter's part.

The IAF, traditionally a staunch supporter of Dassault and the Mirage-2000 fighter, is apparently changing its views.

Dassault, say pilots, has badly damaged its credibility during the recent negotiations by arm-twisting the IAF over the supply of spares for the Mirage-2000 fleet.

The competition gets stronger 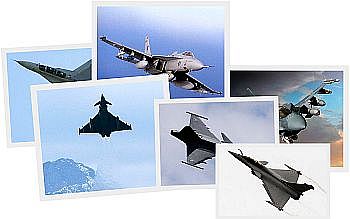 Image: A collage of the players in fray for the lucrative IAF deal

Five of the six contenders for the MMRCA contract -- Boeing, Lockheed Martin, Eurofighter, Gripen and RAC MiG -- know they could reap handsome gains, through larger fighter orders, if India chooses not to upgrade the Mirage-2000.

The sixth contender, Dassault Aviation itself, realises failure to negotiate the Mirage-2000 upgrade contract could seriously damage the chances of its Rafale fighter for the MMRCA contract.

The fighters in contention for the MMRCA contract are sequentially undergoing flight trials and evaluation, which the IAF expects to complete by April 2010. It will take another six months to finalise the trial report and send that to the MoD, which will then announce the winner of the contract.