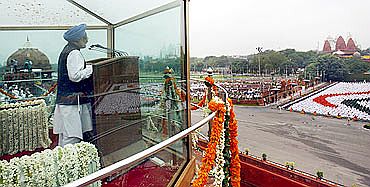 Prime Minister Dr Manmohan Singh unfurled the National Flag on the ramparts of the Red Fort on Sunday to celebrate the 64th Independence Day. After unfurling the tricolour, Dr Singh addressed the nation.

On arrival at the Lahore Gate of Red Fort, the prime minister was received by the Union Defence Minister AK Antony, Minister of State for Defence MM Pallam Raju and Defence Secretary Pradeep Kumar.

The defence secretary introduced General Officer Commanding, Delhi area, Major General Manvender Singh to the prime minister. The GOC Delhi area then conducted the prime minister to the saluting base where a combined inter-services and police guard presented general salute to the PM. Thereafter, Dr Manmohan Singh inspected the guard of honour.

The guard of honour contingent for the prime minister consisted of one officer and 24 men each from the Army, Navy, Air Force and Delhi Police. The guard of honour was positioned directly in front of the National Flag across the moat below the ramparts. 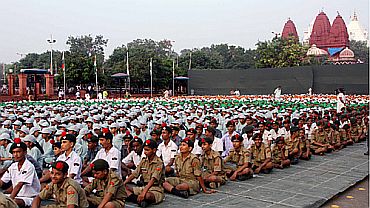 The Army contingent for PM's guard was from 15th battalion of the Jammu & Kashmir Rifles. The battalion was raised on January 01, 1976 at Dhana (Madhya Pradesh). Soon after it was raised, it was inducted in counter insurgency operations in Manipur, where it proved its mettle by capturing 55 hard core insurgents.

During its first field tenure, the unit was awarded two Shaurya Chakra, four Sena Medals, two Vishist Seva Medal and one Chief of the Army Staff Commendation Card. Over the years the unit has had the opportunity to serve in varied terrain conditions. The unit has always performed to the satisfaction of its cadres wherever it has been deployed.

After inspecting the guard of honour, the prime minister proceeded to the ramparts where he was greeted by the defence minister, the minister of state for defence, Chief of Army Staff General VK Singh, Chief of Naval Staff Admiral Nirmal Verma and Chief of Air Staff Air Chief Marshal Pradeep Vasant Naik. The GOC Delhi area conducted the prime minister to the dais to unfurl the National Flag. 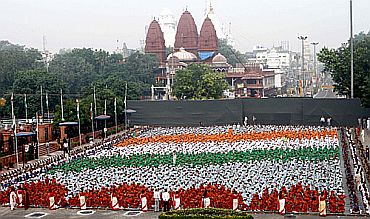 The unfurling of the tricolour was synchronized with the 21 gun salute fired by the valiant gunners of the elite 299 Field Regiment. The battery will be commanded by Lt Col Hemant Kumar Sah and the Gun Position Officer will be Sub (AIG) Gurappadu R.

The National Flag Guard comprising 32 men and one officer each from Army, Navy Air Force and Delhi Police will present Rashtriya Salute at the time of unfurling of the National Flag by the Prime Minister.

The Air Force Band Number 6 played the National Anthem when the National Guard presented 'Rashtriya Salute' while unfurling of the National Flag by the Prime Minister.

All Service personnel in uniform stood and saluted. The Air Force Band was commanded by Warrant Officer PN Yadav. Two Air Force Officers, Flying Officer A Vashishtha and Flying Officer Pankaj Gupta were positioned on either side of the saluting dais for the PM for AsDC duties. Flt Lt Neha Chauhan assisted the prime minister in unfurling of the National Flag.

The Army contingent for National Flag Guard was from the 2nd battalion of the Rajput Regiment, which was raised on November 30, 1798 at Badgaon.

The battalion designation was altered eight times, since the raising and finally rechristened as the 2nd Bn of the Rajput Regiment (Kalichindi) on independence.

The battalion has the distinction of having nine battle honours and two theatre honours and has taken part in 1947, 1962 and 1971 operations, where officers and men have exhibited extraordinary courage and valour.

After unfurling the National Flag, the Prime Minister will addressed the nation.

The cadets also participated in the singing of patriotic songs along with school children. Three thousand five hundred girl students from 39 government and government-aided schools under the Directorate of Education, National Capital Territory of Delhi sang the National Anthem.

They also sang patriotic songs in different regional languages before the start of the Independence Day ceremony.

The weather forced the PM to use a glass enclosure 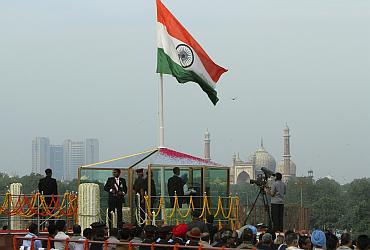 With weather playing truant, Prime Minister Manmohan Singhspoke from a closed enclosure while addressing the nation on Independence Day as the meteorological office had predicted the possibility of rain. Singh, attired in his trademark blue turban, spoke in Urdu from the ramparts of the magnificent Red Fort, which was under a heavy presence of gun-totting security men. Usually, the Prime Minister speaks from an enclosure which is not fully covered, but this time, prediction of rains as well as last year's experience prompted authorities to go for the closed enclosure.

Last year, there was heavy downpour during the Independence Day celebrations. However the weather appeared to relent, with no showers, and an overcast sky sparing the visitors the intense heat of the sun. Though humidity was an irritant forcing people to use invites and papers as fans. Sare Jahan se Achha -- the famous line of Mohd Iqbal -- reverberated the air during the Independence Day celebrations as over 3,000 school children, dressed in saffron, white and green, welcomed the prime minister with loud cheers and applause. They listened attentively to the PM's 35-minute address and responded with loud cheers and applause time and again.

Singh arrived at the 17th century Mughal monument in his motorcade and was received by Defence Minister A K Antony, Minister of State for Defence M M Pallam Raju and three Service Chiefs at the Lahore Gate. After inspecting the guard of honour, he unfurled the tricolour. The tricolour, however, did not unfurl smoothly and the Flt Lieutenant Neha Chauhan, who was assisting Singh had to intervene. As the tricolour opened majestically, the cannons boomed and the sound of 21 guns. The prime minister began his speech condoling the loss of lives in the Leh landslide tragedy, to which some children clapped, making the scene awkward for the teachers manning them. The applause was however not as frequent and exuberant, with the children clapping six times during the 35-minute address. Last year, 13 rounds of clapping were witnessed during the speech.

The applause was the loudest when Singh referred to the Right to Education Act and assured that his government was leaving no stone unturned in dealing with price rise. A mention of Commonwealth Games, which Singh said was a matter of national pride, also elicited applause from theaudience.

The children loved the I-Day extravaganza 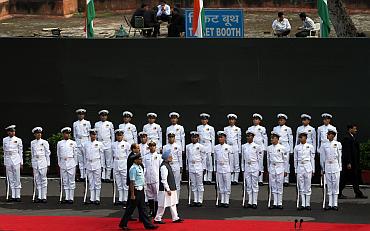 Some of the young children who clapped enthusiastically, however, said they did not get a word of what the prime minister said, but were all too happy to sing the national anthem at the historic monument. The PM's speech was also marked a few pauses and fumbles, while he referred to petrol price hike and climate change.

Mahatma Gandhi and Norman C Borlaug also found a mention in Singh's address, as he referred to the environmental concerns of the day and the need for another revolution in agriculture. The national capital was mentioned twice in the prime minister's address as he spoke about the upcoming Commonwealth Games and expressed confidence that Delhi would successfully host the extravaganza, and when he referred to the new T3 terminal as an excellent example of India's efforts to improve its infrastructure.

Many children, who attended the ceremony for the first time, said they were delighted to see the prime minister speak in person, and insisted they would like to visit again. "We liked the prime minister making a strong reference to the need for investing in agriculture, and that of another revolution in the farm sector," said Mayank, an NCC cadet and a IX standard student of Ramjas School, Chandni Chowk. Akshita, a VI standard student of IP School candidly confessed that she did not understand a word of the prime minister's speech, but said she was delighted when he waved to the children from his vehicle. "I would like to attend the Independence Day celebration again as it was a pleasure to sing the national anthem along with so many people at the Red Fort," she said.