Sign in  |  Create a Rediffmail account
Rediff.com  » News » The story of Indian PMs and the tiranga at Red Fort 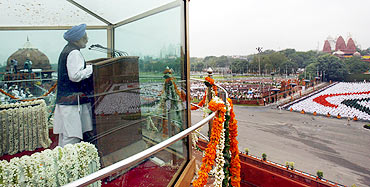 When Prime Minister Manmohan Singh hoists the national flag from the ramparts of the Red Fort on Independence Day on Sunday, it will be the seventh time in a row for him, with only Jawahar Lal Nehru and Indira Gandhi ahead of the economist-turned-politician.

Dr Singh will jump to the third position among all prime ministers who have had the honour of hoisting the national tricolour at the historic Red Fort, overtaking his predecessor Atal Bihari Vajpayee.

Dr Singh already has the distinction of being the third longest serving premier in the country after Nehru and his daughter Indira.

Red Fort, a symbol of national integration has seen Nehru, the first head of the government, unfurling the national flag 17 times -- the most by any Indian prime minister so far. He is closely followed by Indira Gandhi in the second place, who carried out the honour 16 times. 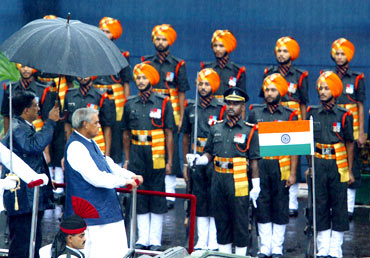 In the fourth place is Bharatiya Janata Party's stalwart Vajpayee, who unfurled the tricolour six times. After the defeat of the National Democratic Alliance in the 2004 general elections, the United Progressive Alliance came to power and Manmohan Singh took oath as the prime minister on May 22, 2004.

Since then, Dr Singh has hoisted the flag at Red Fort six times. This Independence Day would be the seventh time that Dr Singh would be hoisting the national flag, putting him ahead of Vajpayee.

Vajpayee, who led the National Democratic Alliance from March 19, 1998 to May 22, 2004, unfurled the national flag continuously for six times at the Red Fort. He became the prime minister on May 16, 1996 also but could not continue in office for more than 14 days and had to resign on June 1, 1996. 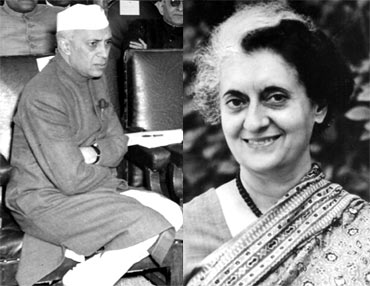 Nehru hoisted the flag for the first time at the Red Fort after India became independent on August 15, 1947.

After unfurling the flag, Nehru delivered his famous 'Tryst with Destiny' speech.

In her first tenure, Gandhi hoisted the flag at the Red Fort continuously for 11 times, followed by five times in her second tenure. In the history of independent India, Gulzarilal Nanda and Chandrasekhar are the only two prime ministers who did not get a chance to hoist the flag at the ramparts of the Red Fort. 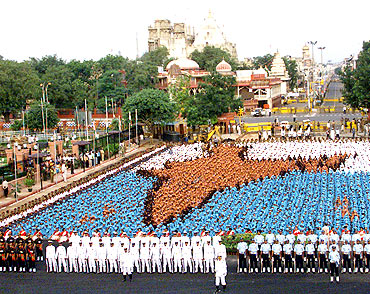 After the death of Nehru, Nanda took over as the prime minister on May 27, 1964 but he resigned on June 9 in the same year. He was replaced by Lal Bahadur Shastri. Likewise, Chandrasekhar assumed the prime minister's office on November 10, 1990, but he had to resign before Independence Day of 1991 on June 21, 1991.

After the death of Shastri, Nanda remained in office between January 11 and January 24, 1966. He was replaced by Indira Gandhi.