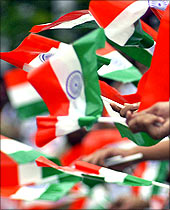 India will mark its 63rd Independence Day on August 15 this year.

Today, India is one of the fastest growing economies in the world and is on its way to becoming a considerable force on the global stage. But millions of Indians have been left behind as India races for the top slot in economic supremacy and flexes its muscles as a global power.

Nearly 40 per cent of Indians still live below the poverty line and can't manage two square meals a day. The common man faces crippling corruption and red-tapism to get access to basic amenities. Female infanticide remains rampant and honour killings take place in the national capital. Religious fundamentalism is a perpetual menace and terrorism has become part of India's vocabulary.

What according to you are the top five problem areas that India needs to set right immediately? The five issues that hamper India's forward journey and need urgent attention?

Rediff.com asks you, dear readers, to send in your opinions and suggestions to citizen.reporter@rediffmail.com. We will publish the best ideas and inputs right here on your favourite website.