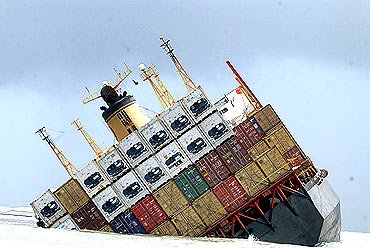 The oil spill from MSC Chitra, which collided with another cargo ship near the Mumbai coast on Saturday, has stopped, Coast Guard sources said on Monday.

"The leakage of oil from the ship has stopped on its own," said S P S Basra, Inspector General of Coast Guard (Western Region).

"It is observed that in the last six hours, the fuel from the ship tank has stopped coming out," Basra said. Oil was leaking from two of the 12 tanks of the vessel which had got damaged due to the collision.

Meanwhile, the government has summoned foreign experts to tackle the alarming situation following the oil slick and has asked for a status report from the shipping ministry.

Legal action against owners of the vessels 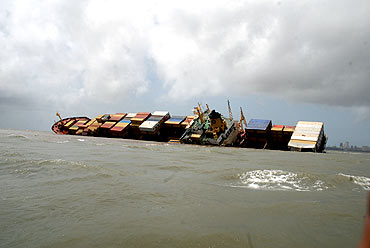 Prime Minister Manmohan Singh has called for a preliminary report from the ministry on the oil spill.

Two Panamanian cargo ships -- MSC Chitra and Merchant Vessel Khalija -- collided off the Mumbai coast, causing an oil-spill from one of the vessels.

The issue was also raised in the Rajya Sabha where Environment Minister Jairam Ramesh said legal action has been initiated against owners of the vessels. Another team of experts on maritime disasters has arrived from Singapore to assist in salvage operations.

Thirty-three crew members, including two Pakistanis, were rescued following the incident. The Navy and the Coast Guard carried out anti-pollution operations for the third consecutive day on Monday to check and neutralise the oil spill. 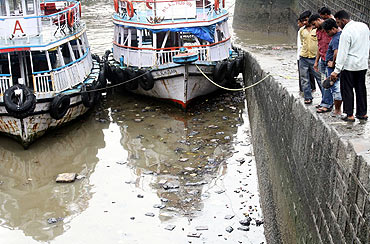 MSC Chitra was carrying 2660 tons of heavy oil, 284 tons of diesel and 88 tons of lubricant oil, of which 500 tonne is believed to have spilled. The oil has spilled due to its 75 degree tilt after the vessel ran aground about 1.5 miles from Prong's Reef, off Mumbai coast.

There could be much more serious ecological implications of the accident as containers aboard MSC Chitra are falling into the sea, said sources. At least 31 containers with hazardous chemicals and pesticides, including organo-phosphorous pesticides, sodium hydrochloride and pyrethroid pesticides, are on board and quite a few of them might have tumbled into the sea and their contents leaked.

The oil spill has extended to 5 kms 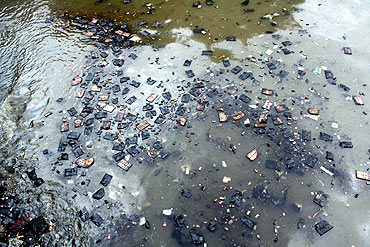 The oil spill off Mumbai coast has extended to 5 kms from its point of origin. The authorities are also trying to retrieve the 31 containers carrying hazardous material from the sea. The task of marking locations of the containers has been entrusted to the personnel of the Mumbai Port Trust and floating cranes would be deployed to salvage the sunken containers. Jawaharlal Nehru Port Trust has earmarked areas where the salvaged containers would be stored.

The Coast Guard is trying to clear the oil by the method of dispersing and containing the spill with oil booms. Chief Minister Ashok Chavan has instructed the Maharashtra Pollution Control Board and the local administration to arrange for gunny bags, saw dust and rice straw for physical containment of the spill near the ecologically sensitive areas of the shore.