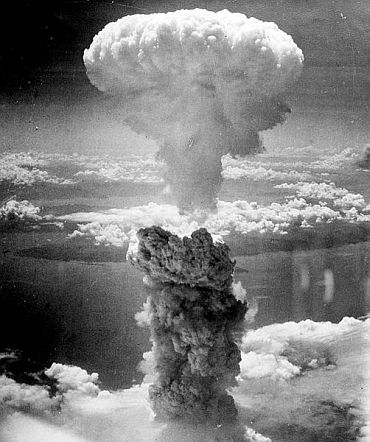 Three days after Little Boy' nearly wiped out an entire city from the face of the earth on August 6, 1945, the United States made up its mind to hit the final nail in Japan's war ambitions.

Striking a decisive blow to the Japan's ambitions riding with World War II, President Harry S Truman gave the order to his boys to drop a second atomic bomb.

'Fat Man' claimed 40,000 to 75,000 lives on detonation in Nagasaki. The radius of total destruction was about a mile (1 2 km), followed by fires across the northern portion of the city to two miles (3 km) south of the bomb.

Nagasaki was never the primary target 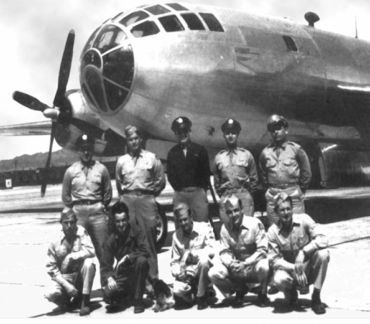 Image: The Bockscar and its crew, who dropped the 'Fat Man' atomic bomb on Nagasaki

Interestingly, Nagasaki was never the primary target of the American bombers. At 3:47 a.m. on August 9, 1945, a B-29 namedBock's Car lifted off from Tinian and headed toward the primary target: Kokura Arsenal, a massive collection of war industries adjacent to the city of Kokura.

However, aircraft commander Major Charles W Sweeney couldn't drop his payload owing to bad weather and a malfunction on his aircraft that would not let him access his reserve fuel.

Kokura no longer appeared to be an option, and there was only enough fuel on board to return to the secondary airfield on Okinawa, making one hurried pass as they went over their secondary target, the city of Nagasaki.

Jacob Beser, an aircraft crew member, later stated: "There was no sense dragging the bomb home or dropping it in the ocean."

40 per cent bigger than Hiroshima bomb 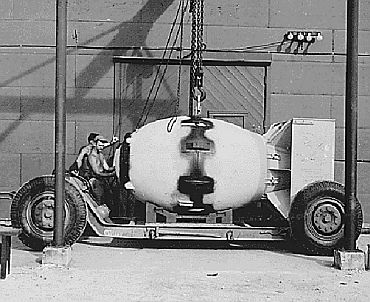 Image: File photo shows the 'Fat Man' prior to being loaded onto the bomber

At 11:02 am, at an altitude of 1,650 feet, Fat Man exploded over Nagasaki. The yield of the explosion was later estimated at 21 kilotons, 40 percent greater than that of the Hiroshima bomb.

Nagasaki was an industrial centre and major port on the western coast of Kyushu.  As had happened at Hiroshima, the "all-clear" from an early morning air raid alert had long been given by the time the B-29 had begun its bombing run.

A small conventional raid on Nagasaki on August 1 had resulted in a partial evacuation of the city, especially of school children. There were still almost 200,000 people in the city below the bomb when it exploded.

The hurriedly-targeted weapon ended up detonating almost exactly between two of the principal targets in the city, the Mitsubishi Steel and Arms Works to the south, and the Mitsubishi-Urakami Torpedo Works to the north. Had the bomb exploded farther south the residential and commercial heart of the city would have suffered much greater damage. 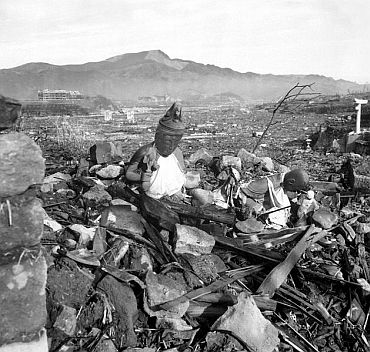 Image: A Japanese report on the bombing characterised Nagasaki as 'like a graveyard with not a tombstone standing'.

Though Fat Man exploded with greater force than Little Boy, the damage at Nagasaki was not as great as it had been at Hiroshima.

The hills of Nagasaki, its geographic layout, and the bomb's detonation over an industrial area all helped shield portions of the city from the weapon's blast, heat, and radiation effects.

The explosion affected a total area of approximately 43 square miles.

Many roads and rail lines escaped major damage. In some areas electricity was not knocked out, and fire breaks created over the last several months helped to prevent the spread of fires to the south. 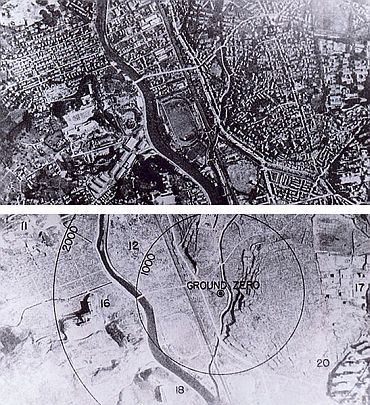 Image: Nagasaki before and after (Below) the bombing

Although the destruction at Nagasaki has generally received less worldwide attention than that at Hiroshima, it was extensive nonetheless.

Almost everything up to half a mile from ground zero was completely destroyed, including even the earthquake-hardened concrete structures that had sometimes survived at comparable distances at Hiroshima.

Almost all homes within a mile and a half were destroyed, and dry, combustible materials such as paper instantly burst into flames as far away as 10,000 feet from ground zero.