Kashmir: Echoes from 20 years ago 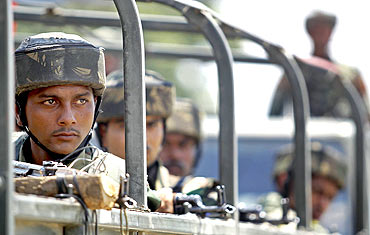 The recent violence suggests that, after 20 years, Kashmir has indeed changed though not in the ways commonly suggested, says Sanjay Kak.

When columns of the Indian Army drove through Srinagar on July 7, rifles pointed out at the city, it was meant as a show of force; to tell its 'mutinous' population -- and those watching elsewhere -- just who was really in charge. Disconcertingly for the Indian government, it has had the opposite effect. Alarm bells have been sounding off: the situation in Kashmir is again explosive; the lid looks ready to blow off.

Although the army has for years virtually controlled rural Kashmir, images of grim-faced soldiers on a 'flag-march' in Srinagar carried a different symbolism. For Srinagar has been the exception -- the showpiece of 'normalcy', of a possible return to the bosom of India's accommodating heart.

Typically, the well-publicised entry of the soldiers was followed by a flurry of obtuse clarifications: the army was not taking over Srinagar; this was not a flag-march, only a 'movement of a convoy'; yes, it was a flag-march, but only in the city's 'periphery'. The contradictions seemed to stem from a reluctance to deal with the elephant in the room: after more than 15 years, the army had once again been called out to stem civil unrest in Srinagar.

When the Indian Army was deployed in Kashmir during the 1990s, the rebellion seemed to be fast spinning out of India's control. Twenty years later, what has changed? There is now a massive investment in a 'security grid', built with more than 500,000 security personnel and shored up by a formidable intelligence network, said to involve some 100,000 people. The armed militancy, too, has officially been contained.

Meanwhile, the exercise of 'free and fair' elections has been carried out to persuade the world that democracy has indeed returned to Kashmir. (Elections certainly delivered the young and telegenic Omar Abdullah as chief minister; but about democracy, Kashmiris will be less sanguine. They will recognise it the day the military columns and camps are gone from the valley.)

Yet July was haunted by echoes of the early years of the tehreek, the movement for self-determination. As a brutally imposed lockdown curfew entered its fourth day, there was no safe passage past the paramilitary checkpoints not for ambulances, not for journalists. For those four days, Srinagar's newspapers were not published; local cable channels were restricted to just 10 minutes a day, and still had to make time for official views. SMS services remained blocked the entire month; in some troubled towns, cell-phone services were completely discontinued.

But Srinagar still reverberated with slogans every night, amplified from neighbourhood mosques: 'Hum kya chahte? Azadi!' (What do we want? Freedom!) and 'Go back, India! Go back!'

This article first appeared in Himal magazine. Reproduced with the publisher's kind permission.

Sanjay Kak is a documentary filmmaker based in Delhi. His documentary, Jashn-e-Azadi (2007), is about Kashmir.

The war of perception 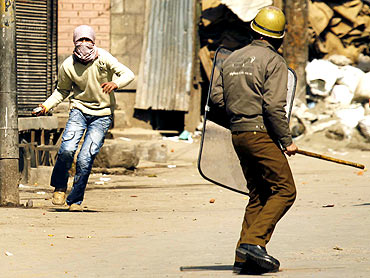 The real barometer of the panic in the Indian establishment, though, was not the army's flag march. It was the frantic speed (and dismal quality) of the attempts to obscure the crisis. In place of politics, it was once again left to disinformation to staunch the haemorrhage.

At first, the home ministry began with the improbable charge that the Pakistan-based Lashkar-e-Tayiba was organising and funding stone-throwing on the streets of Srinagar. This was a rather tame accusation for a militant group whose real signature is the ferocity of its attacks, as displayed clearly in the Mumbai terror strikes of November 2008.

The only people who appeared to swallow this line were the loyal television anchors on the 'national' media; but with no real evidence to go on, even they let the mess quietly slide off the table.

Evidence arrived soon enough, when the home ministry made available a taped phone conversation between two men described as 'hardliner' separatists. As the audio crackled and hissed, television channels provided translations: 'There must be some more deaths'; '10-15 people must be martyred'; 'You are getting money but not doing enough'.

Despite the comic-book directness, it sounded like serious business. In the context of such 'evidence', mainstream television channels began parachuting their star power into Srinagar, and the empty, silent city became the backdrop against which they could stage their own spectacle.

The CNN-IBN correspondent, happily embedded inside an army truck as it made its way through Srinagar, was extolling the impact of the flag march (even as an official was busy denying that there had been any such thing). NDTV provided its usual high-wire balancing act, with Barkha Dutt dredging up the 'pain on both sides'.

The grief of the mourning father of 17-year-old Tufail Mattoo, killed when his skull was taken apart by a teargas shell, was weighed against a Central Reserve Police Force commandant ruing the damage to his truck's bulletproof windscreen.

But such expedient journalism paled before far more damaging hubris. While these 'national' reporters had the run of curfew-bound Srinagar, they omitted to mention that their Srinagar-based colleagues -- local, national and even international journalists -- had been locked in their homes and offices for three days.

While the spin generated by New Delhi probably has an impact on the middle-class viewer of the mainstream Indian media, it has little effect on people in Kashmir. On the ground, they continue to make sense of their own reality. The inability, or refusal, to comprehend this has become endemic to all arms of the Indian state. An exaggerated, even fluid, notion of reality takes its place, in which perception is everything.

This was underlined forcefully in June when the chiefs of the army, navy and air force announced the new 'Doctrine on Military Psychological Operations', a policy document that aims to create a 'conducive environment' for the armed forces operating in 'sub-conventional' operations such as Kashmir and the northeast. The doctrine reportedly provides guidelines for 'activities related to perception management'.

Manipulating the output of a few dozen newspapers and television channels is certainly hard work, but nothing compared with the much harder task of understanding -- perhaps even accommodating -- the aspirations of Kashmiris.

Politicians are out of touch with sentiment on the street 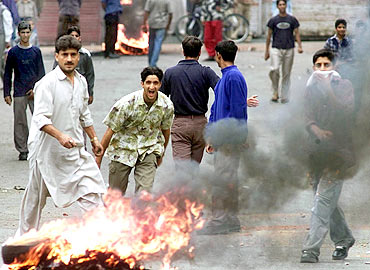 The intensity of the crisis did help in one way, though: It forced some candour out of the familiar faces of Kashmiri politics. (These are the visible ones, called up in times of crisis to represent Kashmir on television. The invisible ones were, as usual, already in detention.)

Mehbooba Mufti of the People's Democratic Party admitted on television that mainstream (or pro-India) political parties have lost all credibility, and now have no role to play in stemming the anger in the streets.

When asked why politicians were not taking out 'peace marches', former separatist and now 'mainstream' leader Sajjad Lone bluntly said that all of them ran the risk of being lynched by the people. Meanwhile, all the oxygen was taken up by discussion of the survival of Omar Abdullah's government, something that mattered little to protestors.

Amidst the baying chorus of television panellists outraged by the gall of 'stone-pelters', many have forgotten that in 1991 it was precisely such public demonstrations -- and civilian casualties at the hands of the CRPF -- that finally triggered a full-fledged armed militancy.

In recent weeks, Omar Abdullah's language has shown how out of touch he is, joining the talk of 'miscreants' with his comments about 'frayed tempers' and waiting for 'tempers to cool down'. Across the board, this disconnect with the structures of electoral politics helped to put the elections of two years ago in some perspective.

In 2007, I finished a documentary film on Kashmir, which had tried to pull back from the quagmire of everyday events to understand the inchoate 'sentiment' for azadi. Quite by coincidence, the film arrived at the very moment that the constructed 'normalcy' of Kashmir was about ready to be shown off: tourists were flowing in, more than 400,000 people had taken part in the pilgrimage to the Amarnath shrine, and elections were being discussed.

Screenings of the documentary in India were often met with raised eyebrows, with people incredulous that such sentiments could survive the weight of the cast-iron security grid -- and, of course, the passage of 20 years.

Yet things can change in a day, and so they did.

In early summer 2008, isolated protests broke out over the acquisition of land for the Amarnath Shrine Board. This eventually turned into the most formidable upsurge of the past decade, with peaceful demonstrations of up to 20,000 people at a time. The cascading protests carried on for several months before being curbed, but not before more than 60 people lost their lives to the bullets of the security forces.

In the summer of 2009, Shopian district was shaken by the rape and murder of two young women; once again, mostly peaceful protests paralysed the valley, and Shopian town was shut down for an unprecedented 47 days.

The cycle of street violence in 2010 too began several months ago, with the uncovering of the Machil killings, where soldiers of the Indian Army (including a colonel and a major) were charged with the murder of three civilians, presenting them as militants for the reward money. Protests led to the killing of protesters, which has led to more protests, and more killings.

The Internet is the new front in the battle 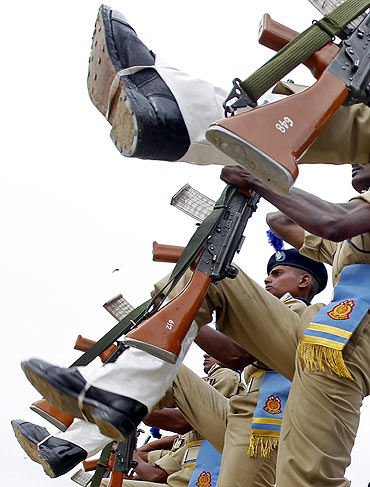 What do Kashmiris want? Most of all, even before azadi, they want justice. As they watched the Indian Army columns moving through Srinagar last month, Kashmiris would have been reminded that the protests this summer started with the army in the killing fields of Machil.

But like the Shopian incident, Machil too has begun to be edged off the burner, and forgotten, as have the hundreds of such killings that civil society groups have painstakingly tried to resurrect.

So, just as elections cannot be confused with democracy in Kashmir, an elected government is no substitute for a working justice system. Meanwhile, the prolonged use of the Public Safety Act, and the dangerous license of the Armed Forces (Special Powers) Act, is slowly wearing thin for the young.

This July, as the numbing news of young Kashmiris being shot in street protests started pouring in, Mirwaiz Umar Farooq, the chairman of the All Parties Hurriyat Conference, told the press that 'the baton of the freedom struggle has now been passed on to the next generation'.

He could have added that, over 20 years, the baton might also have moved from the armed militancy and the 'separatists', straight onto the street.

As the taped phone conversation provided by the home ministry was being celebrated on television, in only a few hours a more accurate translation of what was actually an innocuous conversation was burning through the Internet. This phone 'evidence' evaporated under the heat of scrutiny, its effects felt even in Delhi newsrooms.

Such a speedy deconstruction of a suspect claim is only the latest in the deeply political use of the Internet by young Kashmiris.

These are children of the tehreek, born and brought up in the turmoil of the last two decades. They have not, and probably will not, become armed mujahideen. But thousands are out on the streets, throwing stones, occasionally drawing blood, often taking hits, but in any case successfully paralysing the increasingly bewildered security forces.

What armed militant could achieve more?

So will the Internet be the next threat for the home ministry? Will they accuse the Hizb-ul-Mujahideen of supporting the Facebook chatter about the 'intifada' in Kashmir? And after that?

Already, young Kashmiris on social-networking sites are reporting phone calls from belligerent police officers, threatening them with serious charges including 'waging war against the state'. Reports said that Qazi Rashid, the young mirwaiz of south Kashmir, has been accused of 'instigating violence and justifying stone-pelting' -- through Facebook.

This article first appeared in Himal magazine. Reproduced with the publisher's kind permission.