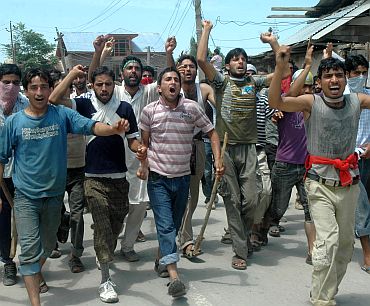 Eight more people were killed and more than 200 injured on Monday in violence-hit Kashmir Valley even as mobs defied curfew and continued to target police stations, paramilitary camps and government offices. An eight-year-old boy and a youth were killed late night, taking Monday's toll to eight.

In capital Srinagar, mobs defied curfew restriction at several places and held protests and marches prompting the security forces to use tear gas and baton charges.

Reports of curfew defiance, attacks on police stations and posts, and other government property have also come in from other towns.

Authorities have been trying to clear the Srinagar-Jammu national highway, which was blocked by protestors at several places in south Kashmir. 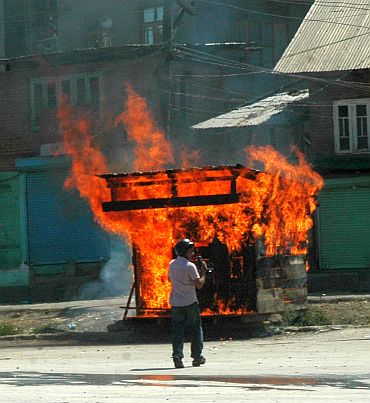 Image: A cameraman runs to safety. In the background, a vehicle set ablaze by a mob

Since early Monday morning, thousands of people shouting anti-India and pro-freedom slogans have been carrying out protest marches in Srinagar and other towns in response to a call by hardline separatist All Parties Hurriyat Conference.

A highly agitated mob attacked and torched a local police camp in south Kashmir Kakpora town in the afternoon.

Security forces opened fire killing one youth, identified as Mohammad Yaqoob Bhat, on the spot and wounded two others who were evacuated to hospital for treatment.

Violent mobs later also torched the office of the block development officer and an information centre.

Protests erupted in the south Kashmir Bejibehara town, 50 km from Srinagar after the body of one Tariq Ahmad reached there. Tariq succumbed to injuries he had sustained on Saturday after being hit by a tear gas shell in the town.

Thousands of people joined his funeral in the town. 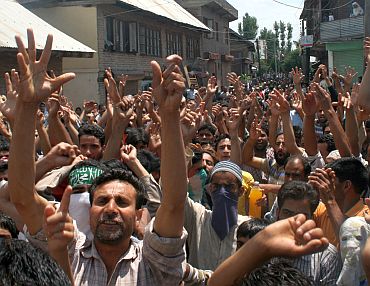 Image: An anti-India protest in Srinagar

In the Jablipora village near Bejibehara, security forces had to open fire to quell an unruly mob that tried to attack a CRPF camp.

"Two persons were injured in the firing. They were evacuated to hospital for treatment. Condition of one injured is critical," senior police officer Shafaqat Ahmad said.

In the adjacent Sangam town on the Srinagar-Jammu national highway, one person was killed when an angry mob pelted stones at a CRPF bunker, prompting the guards to open fire.

The youth killed in the firing was identified as Bashir Ahmad Dar.

A 28-year-old youth was allegedly thrashed severely by paramilitary CRPF troopers at Sangam, causing his death in a local hospital. Identified as Arshad Ahmad Bhat, the body has been handed over to relatives.

Use of force just adds fuel to fire 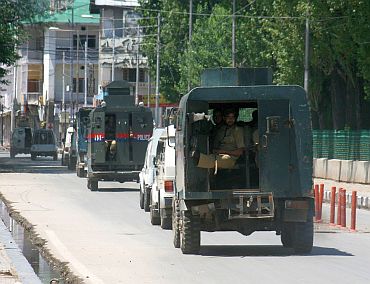 In the Chawalgam village of south Kashmir's Kulgam district, another youth identified as Ashiq Hussain Bhat was killed in security firing following clashes between thousands of protestors and security forces.

A senior police official said protestors made attempts to break the curfew to enter the Kulgam town. One more person was wounded in the firing.

Mobs later went on a rampage and torched a police camp and the office of block development officer in the nearby Koimoh village.

Another youth, identified as Khursheed Ahmad, was killed in north Kashmir's Kralpora village where police said mobs attacked and tried to ransack a local police station. They said police had tried to disperse the protestors using teargas and baton charge.

In central Kashmir's Budgam town, rampaging mobs torched the office of the tehsildar, office complex of chief medical officer and horticulture department office. A portion of the local railway station was also torched at Ompora near Budgam. Police resorted to firing, in which a civilian was wounded.