7 steps that can make a difference in Kashmir 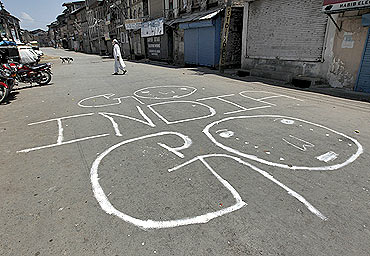 Twenty years and counting, that is the time one has been involved in the 'Kashmir issue', and there is a sinking feeling that like Alice in Wonderland, 'it takes all the running you can do, to keep in the same place.' The phrase 'the more things change, the more they seem to remain same', applies to the Kashmir situation, specially the valley.

The present bout of violence is almost a repeat of the Amarnath controversy that took place two years ago almost to the exact date. Elections were then in the offing and the two young Turks of Kashmiri politics indulged in a competition to whip up xenophobia.

Grant of permission to erect temporary structures for pilgrims was painted as an attempt at demographic change or worse, as if the thousands of pilgrims who visit the Amarnath cave would stay permanently on the barren icy slopes of the Himalayas!

But such is the level of self-delusion in the valley that this was widely believed. But then, much to the grief of the mainstream parties, the separatists and Pakistan's supporters hijacked the issue. There was a reaction in Jammu, counter-reaction in the valley; it seemed as if Kashmir was back to the bad old days of the 1990s.

Come this July, despite peaceful elections and with a National Conference government well in the saddle, we are in the midst of what can only be called a stone-pelting crisis. Even to a seasoned observer like this one, the origins of this are obscure.

What one knows is that in Srinagar it had become a Friday ritual to pelt stones at the police. Some allege that the stone-pelters were paid wages and supplies were arranged. This is not very unlikely as in the early 1990s, it is now well known that ammunition and arms for the separatist Jammu and Kashmir Liberation Front were transported in government vehicles.

While all this was happening, the harangue from mosques and tours of separatists to whip up anti-national feelings continue unabated. Like in the case of the Amarnath crisis two years ago, the honourable governor was missing in action.

Incidentally, do we still have a governor there?

Stone-pelting then led to action by the local police and Central Reserve Police Force in self defence that caused casualties. The funeral of the dead is then turned into another occasion for mass demonstrations, more stone pelting, use of force by police, more casualties, more funerals and so on and on.

On a long visit there in September 2008, I travelled the length and breadth of the valley. One striking thing was the relative prosperity and absence of the kind of poverty one sees elsewhere in India.

The national economic survey this year has confirmed that along with Nagaland (another state where there is an anti-Indian agitation going on), Jammu and Kashmir has just six per cent of its population below the poverty line. The picture one saw in the Rajouri-Poonch area was even rosier. Places like Rajouri that barely had a college or two, has now a full-fledged university.

Today 62 goodwill schools and countless community centres are functioning in the state, established by the army. One felt proud to see the girls's school in Kamalkote village (devastated during the 2006 earthquake) rebuilt by my battalion and equipped with computers et al.

It was amusing to read a statement by an august woman member of the Planning Commission who had a simple solution to the Kashmir crisis: 'Give them computer keyboards instead of stones,' said the great lady. Does she know that this is a reality already even in the remote corners of the state?

Unfortunately, there are enough people in the valley who use these very computers and mobiles to co-ordinate the Friday stone-throwing rituals.

The reasons are not socio-economic but politico-religious 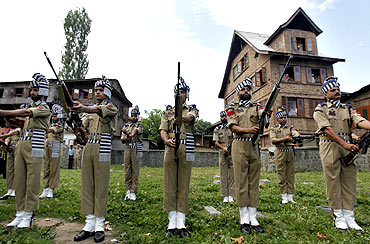 Image: Policemen at a Srinagar graveyard on martyrs' day, July 13
Photographs: Fayaz Kabli/Reuters
Why do the Indians of the Kashmir valley on which the rest of the country spends Rs 11,000 per capita, still refuse to accept that they are Indians?

Why does a cancer-stricken pro-Pakistan leader, who was given remission by Indian doctors (when he was denied an American visa) still want his state to merge with Pakistan?

Are the Kashmiris not aware of the daily mayhem in Pakistan where more Muslims have been killed while praying in mosques in the last two, three years than the last 100 years in undivided India!

The search for answer necessitates a foray into the past.

Sixteen years ago, our group contributed a tiny bit to solve the Kashmir problem when we inducted six hand-me-down computers (gifted by Cummins Ltd, Pune) in schools in Kupwara in north Kashmir. Our group also suggested the opening of English medium schools to counter the influence of madrasas.

A year later, a team of scientists travelled to the Rajouri-Poonch area to study the possibility of applying modern horticulture and mushroom cultivation to better the economic conditions. This journey began in 1991, when one saw abject poverty in rural areas that led people to opt for militancy in return for money.

It is never poverty or economic deprivation that leads to violence and revolt, but loss of hope in a better future. Our effort was appropriately called Project Hope.

It was a tiny effort that did act as a catalyst, and later a much bigger Operation Sadbhavana or Goodwill was successfully launched by the army. Every year, youth from the state are taken on a tour of India to acquaint them with the other parts of the country. Post the Kargil clash of 1999, it seemed that insurgency was brought under control with a carrot and stick approach.

When General V K Singh recently showed his anguish at lost opportunities, he was pointing out that the army has not only brought the insurgency under control but has done a huge amount of social work and earned the goodwill of the general population.

On the back of it, the state and the central governments ought to have gone on the offensive against the separatists on the ideological and political front. But instead, the forces that organised stone-pelting on a regular basis were handled with kid gloves. The result is that emboldened elements have now derailed peace in the valley.

The reason is that the average Kashmiri does not believe that the government has the will to fight.

How else do we explain the fact that on one hand we shout from rooftops that Kashmir is an integral part of India and on the other accept a role for Pakistan in the affairs of Kashmir?

Most of this analysis is, of course, old hat but one thing that has changed in Kashmir is the fact that today, socio-economic deprivation or poverty is NOT the prime motivation, it is the religio-politico issue now. 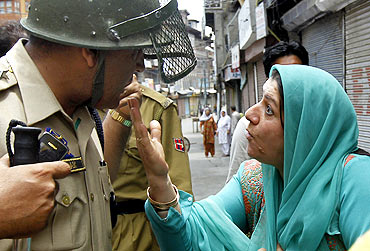 Image: A Kashmiri woman confronts the police during protests in Srinagar, July 6
Photographs: Fayaz Kabli/Reuters
Without too much of debate, one can propose seven steps that can make or mar peace in that area.

Stop giving undue importance to the valley Jammu and Kashmir is not just a few cities in the valley but also consists of Jammu, Kargil, Rajouri-Poonch and Ladakh. Please disabuse the gulli mohalla leaders of their notions.

Identify people who spread disaffection and incite violence and send them to jails outside the state, preferably Jodhpur.

Do not ban Pakistan television. Let the average Kashmiri see what awaits him on the other side of the border.

Take on the separatists on an ideological ground Kashmiri separatism is bogus and a creation of post-independence politics. Kashmir was very much a part of India in ancient times, the middle ages and the modern era.

How was it different from 400-odd princely states? Except that it had a Muslim majority, but do we in India discriminate on the basis of religion?

If not, what is the rationale for the so-called 'uniqueness' of Kashmir? This ideological battle is far more important than all other measures like economic goodies et al.

Let us face it: It is not Kashmiri separatism but Islamic separatism that we face in the valley.

Establish a dialogue with non-politicised religious leaders. Urge them to work for peace. The church in the North-East played this role and helped bring peace. Point out to them the travails of the people of Pakistan. Do they want Kashmiri Muslims to suffer the same fate?

Ask internal supporters as to whether the 20 per cent Shia, 40 per cent Hindus and 5 per cent Buddhists of the state have any future in a Sharia-based entity?

Establish institutional mechanisms. Like an independent commission for police oversight and an armed forces independent office of civil complaints to make sure that the security forces operate within the law and citizens have a forum to redress their grievances. The model in Northern Ireland is worth looking at.

Along with this, post a governor with defence or intelligence background who is proactive. (The incumbent, with his pure bureaucratic background, is an unmitigated disaster, though he claims a military background having been in the military academy for some time).

Such a governor must play a role as a liaison between the government and security forces.

Establish institutions of local self-government While there is constant talk of more autonomy from the Centre, there is virtually no devolution of power to the local levels.

Much of the grievances are essentially of a local nature and this measure will go a long way in Kashmir enjoying the fruits of democracy.

On the one hand there is realisation that unemployment is the cause of unrest, yet on the other xenophobia rules the roost when it comes to investment from other parts of the country If Kashmiris want to stew in their own juice, let them do so but why must the Jammu division or Ladakh or Kargil suffer from this due to Article 370 and the valley people's allergy to anything Indian?

Establish district councils and permit them to invite investments in tourism and other sectors.

These simple steps, if taken, will not solve the Kashmir issue. But they will certainly deal with the present crisis and forestall its repetition.

For a long-term solution to the whole Kashmir problem, there is no substitute to opening a mass debate with the participation of representatives of all regions of the state and not just the valley.

The dialogue must be open and public. Experience teaches us that all the 'quiet' talks behind closed doors generally come to naught when dealing with deep-rooted conflicts. Any agreement arrived at through this is quickly denounced as a sellout and another extremist faction takes birth.

This has been the experience the world over and there is no substitute for a widely-based open dialogue for ushering in durable peace.