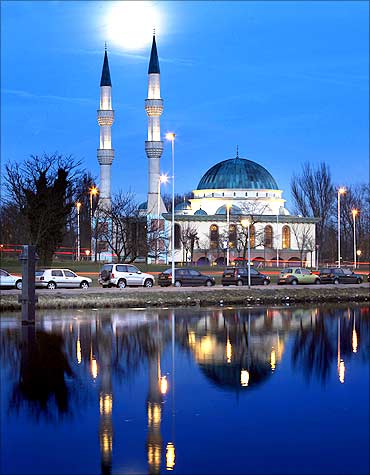 Image: The moon shines over the Mevlana Mosque in Rotterdam
Photographs: Charles Platiau/Reuters

Are the once liberal-minded European nations now more doubtful of the intentions of the minority segments (especially Muslims) that reside in their borders?

Fuelled by the rise in instances of terror and the manner in which the acts are executed, Europe is shutting the door tight on its minorities and doing all it can to 'perhaps' feel protected.

The failure to integrate Muslim minorities in Europe is worrying. The community is falling pray to what is being termed as (in German Interior Minister Wolfgang Schauble words) 'non-compliance with European values'.

Off late, trends pointing towards a radical change in Europe's liberal outlook have come to the fore. Several countries have control measures for immigration, such as language tests and tougher visa and border rules.

In Denmark, immigrants who arrive to the country for marriage have to be 24-years-old -- a rule aimed at preventing forced marriages among the large Muslim immigrant minority. The Netherlands has entry laws that require potential immigrants to take not only language but also 'culture' exams in order to live in the country. 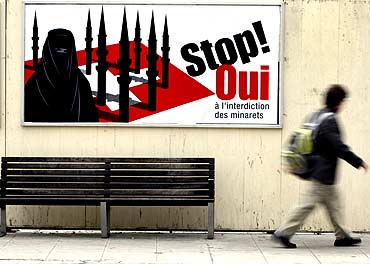 Image: A billboard against the construction of new minarets in Switzerland
Photographs: Denis Balibouse/Reuters

The ban on minarets came as a major blow to the 40,00 odd Muslims who reside the country.

A November 2009 referendum on a ban on minarets, which was opposed by the government, was passed with a 57.5 per cent vote. The result paves the way for a constitutional amendment to ban the construction of minarets.

The Swiss constitution guarantees freedom of religion, but the rightist Swiss People's Party had proposed inserting a single sentence banning the construction of minarets, leading to the referendum.

Supporters of the ban said minarets represented the growth of an alien ideology and legal system that have no place in Swiss democracy. The Swiss government said it would respect the vote and sought to reassure the Muslim population that the minaret ban was "not a rejection of the Muslim community, religion or culture."

The Geneva-based Human Rights Council denounced the vote while passing a resolution, proposed by the Organisation of Islamic Conference that termed the ban as a manifestation of Islamophobia, which clearly contravened international human rights obligations concerning freedom of religion, belief, conscience and expression.

The Swiss government, meanwhile, is drafting a supporting law on the ban -- a process that could take at least a year and could put the country in breach of international conventions on human rights. 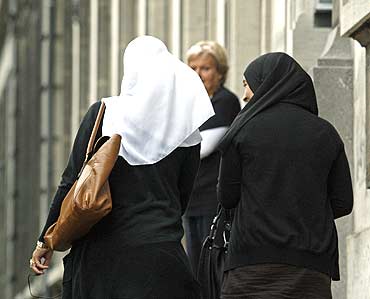 This is a very strong signal being sent to Islamists, said a Belgian MP when he was asked about the rationale behind the country's moves to ban the wearing of the burqa and over the face coverings in public spaces.

A Belgian parliamentary committee has unanimously backed the bill banning the burqa, which if passed by the Belgian parliament in April end would come as a body blow to nearly 600,000 Muslims who reside in the country.

The ban would apply to areas accessible to the public, which would include people walking in the street or using public transport, and would be enforced by fines and even jail terms.

According to The New York Times, the unanimity with which the measure was approved by the home affairs committee suggests strong cross-party support when the measure is discussed by the full Parliament of Belgium, a predominantly Roman Catholic country.

Another factor that is being cited for the bill's smooth passage is the case of a Belgian national, Malika El Aroud, a veiled Islamist extremist who was charged with recruiting young local Muslims for suicide bombing missions.

Accoring to Daniel Bacquelaine -- the bill's chief promoter who was quoted by Mail Online -- the ban might also be used against potentially violent demonstrators who covered their faces. He estimated that only a few hundred women in Belgium wore facial veils, but said it was a rising trend. 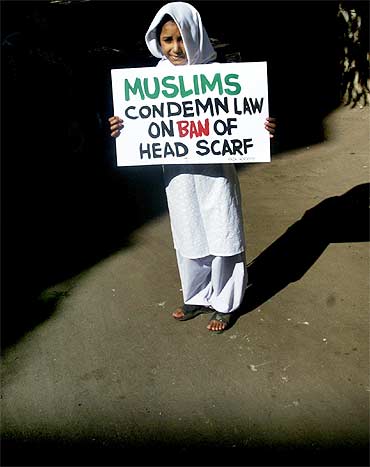 Image: A girl holds a banner during a demonstration condemning the French move to ban the veil in schools
Photographs: Arko Datta/Reuters

France believes that the burqa undermines gender equality and the struggle for equal rights, which the country's women have been waging for years. So they now propose to ban the veil.

France has over five million Muslims and Islam is the second religion of country after Christianity. Over decades, many Muslims have migrated to France from sub-Sahara Africa and North Africa for better financial options and these migrants in particular are resisting government's move to ban burqa.

President Nicolas Sarkozy has declared the burqa "not welcome" in secular France and is in favour of legislation to outlaw it, although he has also warned against stigmatising Muslims.

Bonnafont also cited security as one of the reasons that full naqab (veil) could not be allowed and is unacceptable. 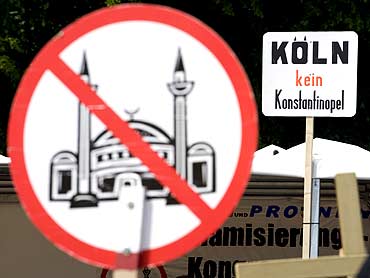 Germany has been witnessing protests over the past few days with right-wing populist pro-NRW (short for the German state North Rhine-Westphalia) party demanding a ban on minarets, like the one passed in a Swiss referendum last year.

What sparked off the protests was the desire of the Muslim community in the western German town of Volklingen to build a small minaret.

In a town meeting held on the subject in late January, a number of locals came out against the minaret plan.

Some have even described the proposed small minaret, stretching a mere eight meters (26 feet) above the roof, as an infiltration of their community. Muslims reportedly make up 5 percent of Volklingen's 40,000-strong population.

Germany is believed to be home to nearly 4 million Muslims, including 220,000 in Berlin alone.

A survey by Der Speigel magazine last December found that, were a minaret referendum held in Germany, 44 percent would vote in favour of a ban while 45 percent would not.

On the other hand, the majority of Germany's 4-million strong Muslim population has Turkish roots and has tended not to produce the kind of radicalism that has thrown a negative light on Islam elsewhere in Europe, the magazine reported. 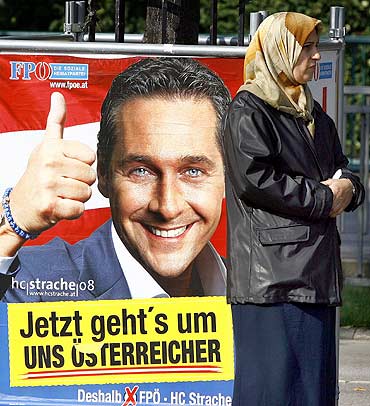 Image: A woman stands in front of an election banner of the Freedom Party, which reads Now it is about us Austrians, in Vienna
Photographs: Dominic Ebenbichler/Reuters

A lot is being written, in the backdrop of the developments in Europe with regard to the alleged 'Islamophobia', about protests have broken out in Poland and Austria over Muslim immigration from around the world.

The recent protests in Poland's capital Warsaw were widely covered by the media. The bone of contention was a multi-million dollar Centre for Islamic Culture, believed to have been funded by a Saudi royal.

Chants of "Down with jihad" and "Freedom for women" by the anti-mosque protestors mingled with "Stop Islamophobia" from the pro-mosque group led by members of Poland's extra-parliamentary Left-wing.

The anti-mosque demonstration was organised by the Future of Europe foundation, who fear the Islamisation of the continent. They claim that the group, which will control the mosque, the Polish Muslim League, has possible links to the extremist Muslim Brotherhood.

Locals were up in arms against a multi-million state-of-the-art Islamic centre. CBS News quoted Town Mayor Christoph Prinz as saying: "There are also many people who see a minaret and the domes as a sign for Islamic domination."

"Because of the new mosque, Turkish boys feel even stronger and bolder in such a way that Austrian boys are unable to walk through the park without harassment by a group of adolescent Turks who say, 'What are you doing here? All this belongs to us. Go away,'" 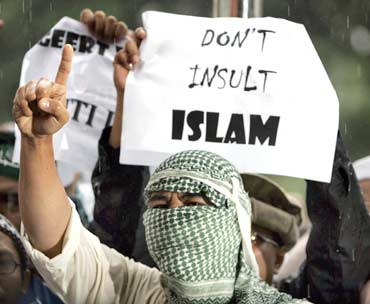 The Dutch have, off late, too have had a sinking feeling -- that pertaining to the massive Muslim influx into their country.

Reports of racial discriminations are common these days in a country that was till recently considered among the most moderate in Europe. Political parties and activists groups have been springing up all over the Netherlands to protest the continued immigration to their country.

Geert Wilders, the leader of the Freedom Party and a member of Dutch parliament, feels that the Muslim way of life is in direct contradiction to Dutch principles.

Wilders sees them as a 'Trojan horse, and fears that European civilization will be lost if the trend of blind, post-modern, multicultural, suicidal tolerance is allowed to continue unchecked.'

Wilder's policies and actions are too extreme, yet they still find support in Amsterdam (the capital of the Netherlands).

In a recent interview to Israeli newspaper Haaretz, he was quoted as saying: 'Because of a high birthrate and swelling immigration, Europe is becoming more and more Muslim every day. Islamic culture, dress and religion are so starkly different that Europeans have begun feeling like strangers in their own homes.' 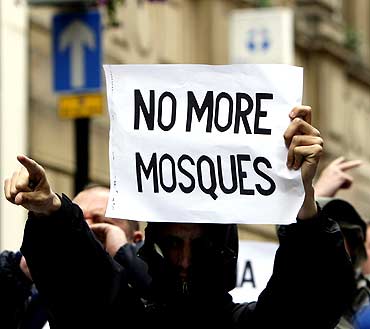 Image: A man holds up a banner during a demonstration by the English Defence League in Birmingham
Photographs: Darren Staples/Reuters

Britain has been in the line of fire since it joined the United States in its war against terror. Add to that a series of terror attacks and sinister plots and you have a heightened level of distrust around.

A major study conducted by Britain's National Centre for Social Research has found that only a quarter of the locals feel positive towards Muslims.

The findings show that the British public is concerned at the rise of Islam in the UK and fear that the country is deeply divided along religious lines. The study also found that more than half of the population would be strongly opposed to a mosque being built in their neighbourhood.

David Voas, professor of population studies at Manchester University, who analysed the data, said that people were becoming intolerant towards all religions due to "the degree to which Islam is perceived as a threat to social cohesion".

"Muslims deserve to be the focus of policy on social cohesion, because no other group elicits so much disquiet. The size and visibility of Islamic communities has led to serious concerns about their impact on British society," The Telegraph newspaper quoted Voas, as saying.

The decision has sparked off outrage among British Muslims, who feel that they are being targeted. They are also concerned that their names will appear on international terrorist watch lists.