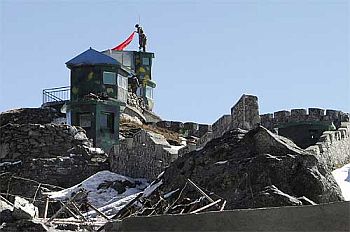 Image: Chinese soldiers put up a flag atop their post at the India-China trade route at Nathu-La Pass
Photographs: Reuters Bhaskar Roy

Although the India-China border is yet to be demarcated and the Line of Actual Control is to be defined clearly, both sides have a very good idea where the perceived LAC lies. This should prevent serious incursions into Indian-controlled territory.

But the problem is that Chinese incursions have been rather aggressive in recent times.

The incursions are happening in the western sector of the Sino-Indian border -- in Ladakh, Himachal Pradesh and Uttarakhand -- and appear to be aimed at extending Chinese territorial claims.

Sporadic incursions in the western sector, the middle sector and the eastern sector have been going on for years, even as the Indian government periodically protests.

(The writer is a New Delhi based strategic analyst) 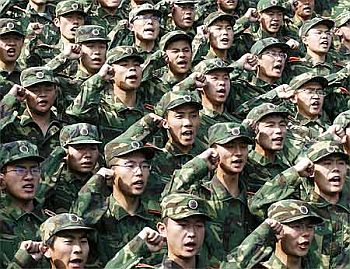 Image: Graduates of the People's Liberation Army take an oath in Jinan in Shandong province
Photographs: Sergei Karpukhin/Reuters
As of July this year, there has been a qualitative change in the type of Chinese violation of Indian Territory. Piling up of rocks well inside Indian territory and painting Chinese characters on them, the incursion of two Chinese helicopters into Indian airspace, the dropping of Chinese-manufactured food cans, and a second reported violation of the Indian airspace by three Chinese F-7 fighter aircraft, all in the western sector, is something to be taken note of.

Reports in a section of the Indian media that Chinese troops fired on and injured two Indo-Tibetan Border Police soldiers appear uncorroborated and have been denied by both countries. The free Indian media, therefore, has to be more responsible.

This, naturally, has never been elaborated. The exchange maps of the two sectors between the two sides remains pending, preventing clarification on where the LAC actually starts and ends.

Why western sector matters to Beijing 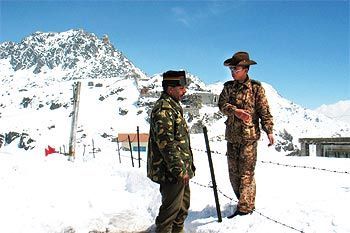 Image: An Indian army officer talks with a Chinese soldier at the 4,310 metre high Nathu-la pass on the country's northeastern border with China
Photographs: Rupak De Chowdhuri/Reuters
The western sector has become increasing important to China in the context of its southwestern strategic thrust. It occupies 38000 square kilometers in the western sector known as Aksai Chin, but claimed by India. The trans-national Karakoram Highway from China into Pakistan also enters Pakistan through Pakistan-Occupied Kashmir (PoK), which is claimed by India.

In an agreement in 1963, Pakistan ceded over 5000 square kilometers of PoK territory to China in violation to Indian claims.

Aksai Chin also provides surface transport access to China through Tibet to Xinjiang, currently in the news for the Uighurs Muslim protest against Chinese occupation. This road is important from the point of facilitating movement of Chinese troops into Xinjiang and to the country's borders with Central Asia.

There are two other very important reasons for China to seek to expand its territory in the western sector. One is to use the Karakoram Highway as an artery to cut short its access to the Persian Gulf through Pakistan.

China has already built a deep seaport at Gwadar in Pakistan and the Karakoram Highway is connected to it. It also plans to construct twin oil and gas pipelines from Gwadar to Western China. This is a great challenge and once achieved, will be an engineering feat similar to the building of the railway across hostile terrain in the Tibetan Plateau.

The Sikkim issue is a pressure tactic 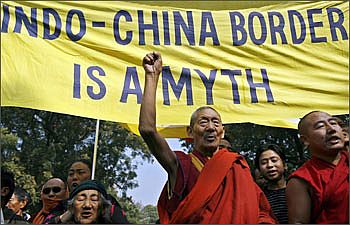 There are two other objectives of strategic importance -- One is to push the Chinese border as far as possible into India and second is to bring the Chinese army as close to the Indian land route as possible, making Ladakh vulnerable by cutting its south eastern side from the rest of India. It is something like what Pakistan tried to do in Kargil in 1999 -- cutting off the land route to Kashmir.

China has started incursions along the border with Sikkim. The "Finger Point" area where Chinese troops are probing is of military importance to both sides, though it is within the borders of Sikkim and Tibet.

Although the Chinese have made a pretence of accepting Sikkim as part of Indian territory during Prime Minister Vajpayee's visit to China in 2003, they never actually did. Prime Minister Vajpayee and the Indian government fell for the trick that if India fully recognised Tibet as a part of China, the latter would accord recognition to India's sovereignty over Sikkim.

India did sign on the Tibet issue, but China did not honour its end of the bargain on Sikkim. China gave an impression that there was no border dispute insofar as Sikkim is concerned. The Sikkim issue is a pressure tactic and has the potential of becoming a burning issue further. To open new pockets of contention is a dangerous move by Beijing.

Chinese are reneging on the 2005 agreement with India 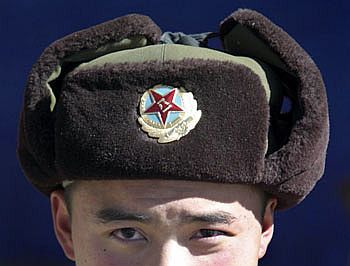 Image: A Chinese soldier looks into the camera at the India-China trade route at Nathu-La, 55 north of Gangtok, capital of Sikkim
Photographs: Rupak De Chowdhuri/Reuters
In the eastern sector, China's claim of 90,000 square kilometers of territory, that is the entire state of Arunachal Pradesh, can be used by it to keep boundary and territorial disputes with India alive, and take it into the international arena.

This is what Beijing exactly did when trying to block an Asian Development Bank (ADB) loan to India for development work in Arunachal Pradesh.

New Delhi has made it abundantly clear that Arunachal Pradesh is Indian Territory and non-negotiable. Small adjustments, however, can be made along the border without disturbing the settled population.

The 2005 India-China agreement on modalities to resolve the boundary issue has a clause that settled populations would not be disturbed. Although the agreement was jointly formulated, the Chinese are reneging on the clause.

Why occupation of Tawang matters to China 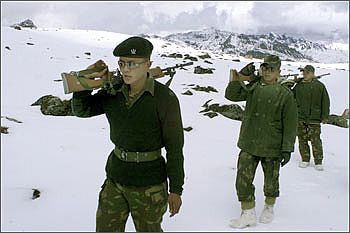 The Chinese target is to get Tawang, which it sees as being of great strategic importance.

One Chinese argument is that since the sixth Dalai Lama was born in Tawang and is dear to the sentiments of the Tibetans, Tawang must be incorporated in Tibet. This is a specious argument. Throughout history, the holy man has moved elsewhere from their birthplace and settled.

Tawang is situated at the tri-junction of India, Bhutan and Tibet. The occupation of Tawang by the Chinese will bring their forces not only on Bhutan's eastern border, but on the shoulders of a strip of land known as Chicken Neck in Siliguri, which joins north-east India to the rest of the country.

In a time of war, this strip of land could be cut-off by Chinese troops in no time especially since the vulnerable corridor is downhill.

Chinese have been quick to grab Indians' weakness 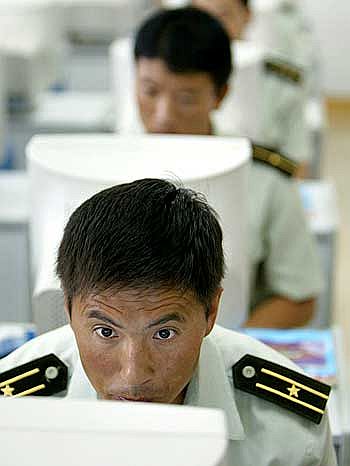 Image: Chinese troops learn to use computers at a military base in Tianjin
Photographs: Andrew Wong/Reuters

Overall, China seems to be pursuing a line to push and create an overwhelming military fortified border with India.

It plans to extend the Tibet railway to the Indian border in the Eastern sector, at Xigatse, which will greatly help troop mobilization.

One can imagine the Indo-Himalayan belt being pushed southward, according to Beijing 'forward defence' doctrine.

While China has been fortifying its borders with India, the same cannot be said of India.

The Indian side has built hardly any permanent structure. In some areas, Indian patrols do not go even up to the area of Indian claims, in some parts they go unarmed, and at some other portions there are only civilian patrols.

This reportedly is a government decision not to provoke the Chinese. The Indians have shown a weakness, which the Chinese have been quick to grab. 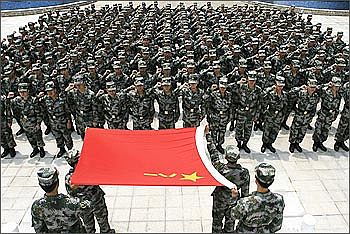 Image: Soldiers from the Chinese People's Liberation Army
Photographs: Reuters
As to the question of a Chinese attack being imminent or by 2012, the answer at the moment is no. There is, however, a possibility that a spark in one place could light up the entire length of the border.

Despite India's vacillations over the fortifying of its borders, the situation is not similar to what prevailed in 1962. Unlike in 1962, the Indian Air Force will now also join the action if Chinese troops move into Indian Territory.

The Chinese Air Force is not yet ready for a combat along the borders, though there are reports that they are moving medium or intermediate range missiles into Tibet.

Having said that, nothing in military preparedness can be left to chance. If Indian strategists think that the 60 billion dollars bilateral trade with China is an insurance against a Chinese surge along the borders, they are mistaken.

The Chinese are preparing to fight what they call "local wars" which may not lead to snapping of diplomatic relations. Military preparedness for India is the only insurance against a Chinese attack.