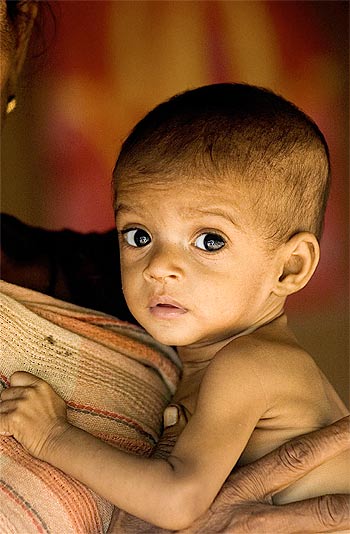 Despite India's recent economic boom, at least 46 per cent of its children up to the age of three still suffer from malnutrition, making the country home to a third of the world's malnourished children, a study said on Thursday.

Noting that the country is an 'economic powerhouse but a nutritional weakling', the report by the British-based Institute of Development Studies, which incorporated papers by more than 20 analysts from India, said, "At least 46 per cent of children up to the age of three in India still suffer from malnutrition."

India will not meet the UN Millennium Development Goal 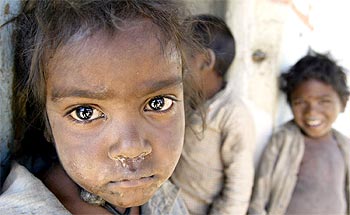 "It's the contrast between India's fantastic economic growth and its persistent malnutrition which is so shocking," Lawrence Haddad, director of the IDS, told The Times.

The United Nations defines malnutrition as a state in which an individual can no longer maintain natural bodily capacities such as growth, pregnancy, lactation, learning abilities, physical work and resisting and recovering from disease.

The report said India will not meet the United Nations Millennium Development Goal, of halving its number of hungry citizens till 2043, though it had committed in 2001 to reach it by 2015.

6,000 children die every day in India 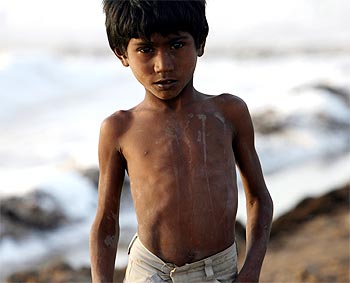 Image: A worker's son poses for a picture at a salt pan near Bhavnagar in Gujarat
Photographs: Arko Datta/Reuters

The report also highlighted the government's failure to improve basic living standards for most Indians despite its unprecedented economic growth since 2004.

"The boom has enriched a consumer class of about 5 crore people, but an estimated 88 crore people still live on less than $2 a day, many of them in conditions worse than those found in sub-Saharan Africa," it said. 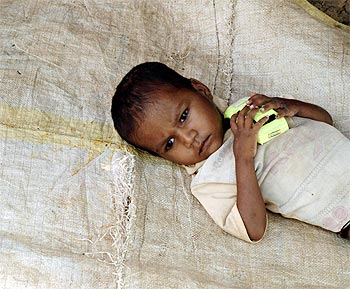 Image: A two-year-old child suffering from grade-four malnutrition rests outside his hut in Kelghar village, about 150 km northeast from Mumbai
Photographs: Reuters

The report said that one of the main problems was that millions of Indians were unable to hold government officials to account for delivering government feeding programmes, with bureaucrats frequently excluded large groups of individuals -- including those from the lower castes and women -- from government initiatives.

Michael Anderson, the head of Department of International Development in India, which will spend 500 million pounds on health and nutrition in India between 2008 and 2012, said, "There is no shortage of ideas about what to do to tackle malnutrition. But leadership from the top and joint action across the government are needed to turn these ideas into practical solutions. The challenge is urgent: the lives of millions of children depend on it."