Obama to host a state dinner for Manmohan Singh 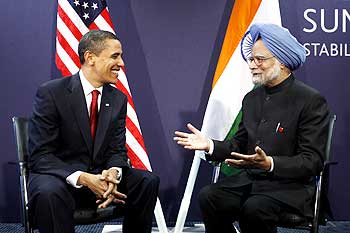 US President Barack Obama's invitation to Indian prime minister for a state dinner is a reflection of the importance attached to not only Indo-US ties, but also the personal admiration of Manmohan Singh by him--if the history and tradition of the White House is of any indication.

Over the past several decades a state dinner honouring a visiting head of the government has emerged as one of the grandest and most glamorous of White House affairs, which is part of an official state visit and provides the President and First Lady the opportunity to honour the visiting head of state and his or her spouse.

For the US President, the state dinner is a courtesy -- an expression of good will -- a way of extending hospitality. It not only brings to mind the tradition of breaking bread with friends to seal a friendship, but also is an event that also showcases global power and influence.

The traditional toasts exchanged by the two leaders at the dinner offer an important and appropriate platform for the continuation of the serious dialogue that has taken place earlier in the day.

And the very fact that Singh has the rare distinction of having the honour of being the state guest on two occasions and that too by the two different presidents from different parties, has its own story to tell and the personal rapport he has been able to establish with the American leaders with his leadership role.

Kennedy had hosted Nehru and Indira in 1961 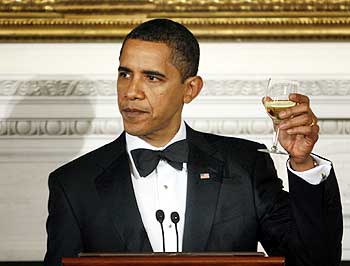 Even though the relationship between India and the US immediately after independence was not that good, the then US president John F Kennedy had invited Pandit Jawaharlal Nehru for the State Dinner on November 7, 1961.

A file picture from the John F Kennedy Library shows the Kennedys walking towards for the State Dinner along with Nehru and his daughter Indira Gandhi.

During the 19th century, a series of "state dinners" were held every winter social season to honour Congress, the supreme court and members of the diplomatic community.

In recent times, the term state dinner has come to mean more specifically a dinner hosted by the President honouring a foreign head of state as the guest of honour.

The first ruling monarch to attend a state dinner at the White House was King David Kalakaua of the Sandwich Islands (Hawaii), hosted by then president Ulysses S Grant on December 12, 1874. 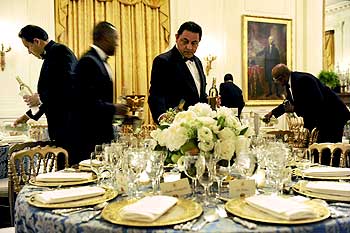 According to a background released by the White House Historical Association, the restoration of the White House in 1902 brought with it a more appropriate setting for the nation's official entertaining.

The moving of the president's office to the newly constructed West Wing and the Neoclassical remodeling of the mansion's staterooms gave Theodore Roosevelt a perfect setting reflecting America's growing power and influence.

The World War I years saw few and simple dinners with Woodrow Wilson at the White House. Even the traditional New Year's reception was called off in 1918. The World War II state dinners were conducted as usual, only with simpler food. Franklin Roosevelt abandoned the "made list", (a core of guests distributed among social events) thus making room for guests invited for a purpose other than social.

While the White House underwent a complete interior reconstruction from 1948 to 1952, the Trumans lived at Blair House and state dinners took place in local hotels.

The first lady sets the tone of the dinner 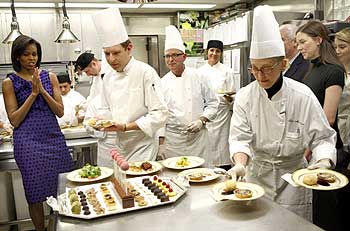 The state dinner is typically considered to be an event of the First Lady -- who sets the tone.

In fact it is the first lady and her staff who are responsible for the elaborate planning and attention behind the glitter and ceremony of the state dinner. These formal dinners involve the creation of invitations and guest lists, menus, flowers, table settings, seating arrangements and entertainment for the evening.

"The first lady works closely with her social secretary, the executive residence staff and the State Department to coordinate every detail of this very special event," the backgrounder said.

The White House Historical Association says that the invitations for the event are the most important and the most sought after in the nation's social whirl. About the number of guests, it says the State Dining Room seats 120 people and must accommodate the official party and an equal number of administration people leaving space for 40 couples.