Spectacular wildlife photos from around the world 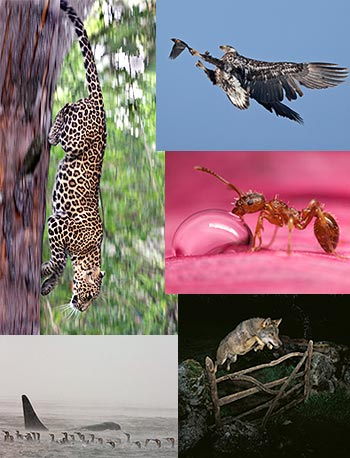 They say images say a thousand words. But some go beyond that to open before us a world unexplored before.

Rediff.com brings before its readers some such snapshots that recently won laurels at the 2009 Veolia Environnement Wildlife Photographer of the Year Competition.

Every year the competition finds the very best wildlife images taken by the world's top professional and amateur photographers.

This year, more than 43,000 entries from 94 countries were received. 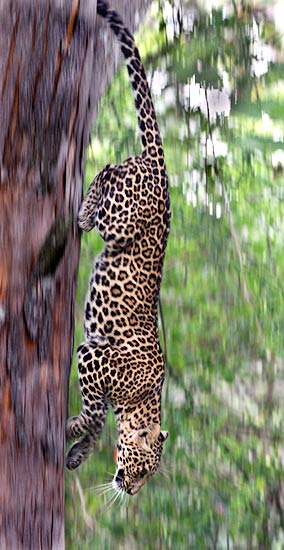 Driving along a twisty track in Nagarhole National Park in southern India, Ajit didn't see the leopard until he was almost at the tree -- rather, he spotted her flicking tail hanging down like a bell-rope.

In the thick forests of southern India, leopard sightings are rare, and ones lasting more than a few moments are rarer still.

Draped over a branch, the female posed for Ajit 'like a professional model' for a full 20 minutes.

The end of the show was signalled by the sound of a vehicle. But instead of leaping from the tree, she swept straight down the trunk 'with a grace that was truly sublime'.

Clawed by the opportunist 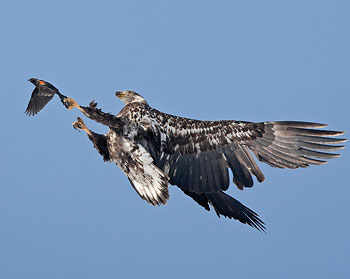 In January 2009, something strange happened at a cattle feedlot in Colorado, US.

American lensman Rob Palmer noticed a group of bald eagles sitting in a large tree nearby. Usually, bald eagles hunt near water and eat fish. But they are also opportunists. On that day, they had gathered to feed on starlings and red-winged blackbirds and would launch themselves out of the trees and chase the small birds up into the sky.

Rob suspects that the cattle feed may have been treated with an avicide (a bird poison) that affected the birds' nervous systems. But after two weeks, the odd behaviour of the small birds stopped, and within a few days, the bald eagles left.

Giant killer hunts in a storm 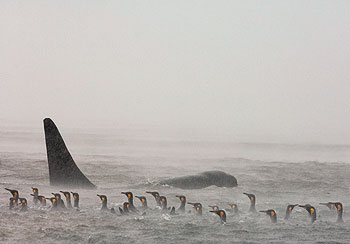 This picture was taken in a torrential rainstorm on Possession Island in the sub-Antarctic Crozet Archipelago. A killer whale family was hunting king penguins and southern elephant seals just off a nearby beach.

Italian Stefano Unterthiner, whose Killer in the Mist photo was highly commended in the Animals in their Environment category, said: "Over four months, this was the first time that I saw killer whales so close to shore or to the king penguin rookery. The penguins were in a terrible panic."

"The drama was intense, with the enormous male -- its dorsal fin slicing through the grey water -- and the simply terrible weather."

Stefano spotted the killer whales from the cliff overlooking the beach and then spent more than three hours photographing them in whipping rain. 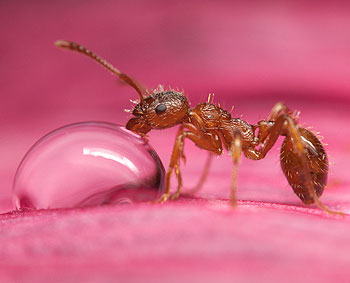 After a summer shower, Hungarian Andras Meszaos headed off to his local forest to take photographs.

He specialises in pictures taken around his home near Lake Velence in Hungary -- in particular, close-ups. In a sunny glade, he noticed lots of red ants running up and down a flowering common mallow, feeding on the sugar secretions of aphids sucking from the buds.

Here, one of the ants sips from a raindrop balanced on a mallow petal.

"The beauty of macro-photography," says Andras, "is the worlds it reveals -- all the activity going on in miniature that you otherwise would never see."

Andras's Raindrop Refresher was the winner in the 'Animal Behaviour: All Other Animals' category.

Leaping over the dark myth 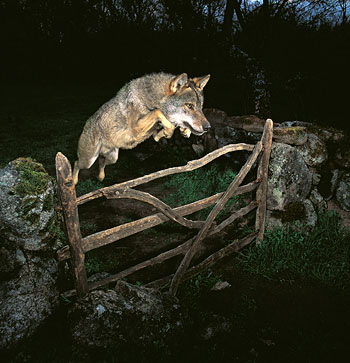 When Spaniard Jose Luis Rodriguez realised he had got the shot of his dreams -- one that he had even sketched on paper -- he couldn't quite believe it. From the start, his fear had been that the wolves would be too wary.

Iberian wolves have always been persecuted by people, who see them as a threat to game and livestock (which they hunt when natural food is scarce), but also because of ignorance and superstition about the supposed danger they pose.

Even though they have always lived close to humans, there are no verified incidences of them attacking people. In Spain, the population of Iberian wolves -- a subspecies of the grey wolf -- is thought to number 1,000-2,000 in the north, with a few tiny, isolated populations in the south.

Jose Luis risked a slow shutter-speed to reveal the moonlit sky and conjure up the atmosphere of the place. He switched from using his Nikon D2X to a Hasselblad so he could get the exact framing that he had in mind.

What Jose Luis hoped was that his picture, 'showing the wolf's great agility and strength', will become an image that can be used to show just how beautiful the Iberian wolf is and how the Spanish can be proud to have such an emblematic animal.

Jose's The Storybook Wolf won the prize in the Animal Portraits category.